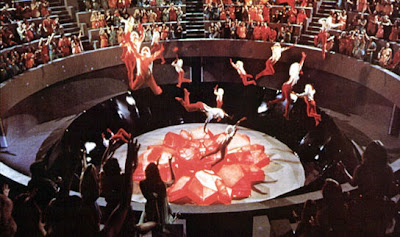 In the movie “Logan’s Run” the age at which the inhabitants of the dystopian future society had to undergo the ritual of Carrousel (and death) was 30.  That was the age at which everyone in the future could expect their life to end. It turns out that the 1976 movie wasn’t far wrong. Apparently, although less dramatically, the age at which you turn into your parents (ie, socially die) is 32.

According to a survey by the website Netmums (link to homepage here), most people think that they turn into their parents at about 32. Generally, the trigger for people is having children of their own.  Some of the “giveaway” behaviours are interesting:

“A survey by website Netmums listed 50 ‘giveaway behaviours’ that show you are turning into your own parent, from preferring estate cars over hatchbacks to realising the bins go out more often than you do.

Mothers admitted ‘fancying children’s TV presenters over rock stars’ and thinking 6am is a ‘time for getting up, not getting in’.

They also cited not knowing a single song in the charts and having handbags crammed with baby wipes and toys.

Fathers said they stop buying casual clothes, leave Facebook because they are jealous of childless friends’ excitement-filled posts and find that air travel is no longer any fun at all.

Other giveaways included finding day-old cups of tea and worrying about a daughter’s future boyfriends.”

It is instructive to see how many apply to Shannon and me now that we have a child (although at the same time it must be mentioned that we are a long long long way from turning 32: at least another two years or so!)

1. My mother-in-law still loves Rod Stewart, so I don’t think that the first one is a good indication.

2. 6am is definitely getting up time, although it has been for both of us for at least a decade – I certainly can’t remember the last time I got home at 6am!

3. Again, I haven’t known a single song in the charts for a long time. But my music taste is still a little more fresh and relevant than my parents…for now…

5. I certainly have stopped buying casual clothes, although I have a lovely wife who buys such things for me – she’s much better than I am at that sort of thing. I’m actually wearing a new cardie bought for Father’s Day at the moment! (I naughtily couldn’t wait until Father’s Day…)

6. I am still officially on Facebook but have found my useage decrease recently. But then again Shannon found her use increase enormously since having Thomas. So again neutral.

7. We haven’t done any air travel since having Thomas – both sets of our parents are definitely beating us on that score!

9. No daughter’s boyfriends to worry about yet thankfully.

So the final score is: we are still way younger than our parents and totally not growing into them at all. But I’m sure it will happen…and I’m sure it won’t be bad at all.

PS I am already indulging in lots of practice at embarrassing Thomas. He is too young to be affected yet, but by the time he hits primary school, I will be ready to be the embarrassing Dad. I can’t wait.