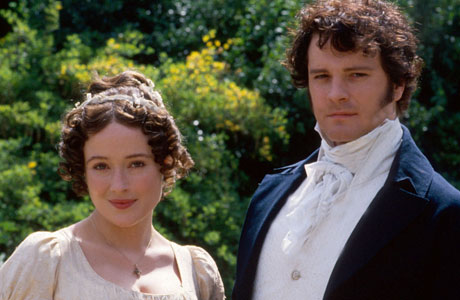 In the BBC series “Pride and Prejudice” Jennifer Ehle and Colin Firth scarcely
so much as hold hands, yet the mutual attraction is palpable.

It is no secret that in recent decades films have placed significant emphasis on sexuality, often showing it without filters, uncensored. To paraphrase Gustave Thibon, French philosopher and essayist, sexuality today seems to have lost its centre, now resembling an “ex-centric” circle, with rays that go everywhere but arrive at nothing. It has lost its meaning, and therefore its value. It is used as a bargaining chip, as an unbinding emotional gesture, as persuasive leverage to sell luxury and all that goes with it … It is found everywhere, and film does little more than magnify this problem of “ex-centricity”.

The sense of modesty, which in the past guided filmmakers to avoid sex scenes in the cinema, today seem outdated: watching protagonists undress and get hot and heavy has become “normal”, though by normal we mean that it is “standard”. Sexuality, purged of its meaning, is put on display; no account is taken of the fact that it can be fully enjoyed with the one you love for the rest of your life.

There are films whose main theme is the loss of virginity. Among the best known is American Pie (1999) directed by Paul Weitz and Chris Weitz.

Central theme of the story? Four young people want to lose their virginity and “get experience” with girls: they only want to satisfy their base instincts, not to grow in a relationship. Sexuality is a whim and not a way of giving.

The loss of virginity is also central to The 40-Year-Old Virgin (2005), directed by Judd Apatow. The main character, played by Steve Carell, is immature and childish, a bumbling simpleton. His friends believe his biggest problem is that he’s still a virgin and try in every way to “liberate” him.

“Sexual activity” and “emotional maturity” are linked: virginity at an “advanced age” is viewed as a problem. “Getting experience” counts more than finding a woman to love and care for.

These are just two examples of the denigration of sexuality in film and the idea that losing one’s virginity is more important than finding love – in particular to young people.

Sexual relationships experienced “immediately” and out of marriage

It is also standard for movies to portray intimacy between unmarried people. Far from being preserved with marriage in view, a relationship is consummated by the protagonists, often after a few weeks or even a few days of dating, but without any real commitment having been made. The final decision to spend the rest of life together is in most cases taken after the physical connection has occurred and, in particular, following a series of events that have divided the lovers for a period.

There is no shortage of examples of films where this dynamic occurs, but a few diverse examples will illustrate the point.

Autumn in New York, a dramatic film of 2000 directed by Joan Chen, is the classic example of a relationship that started as just a bit of fun but then becomes “the love of a lifetime”. Will, played by Richard Gere, is an incorrigible womanizer: he enjoys the passion while it lasts and then leaves when the relationship starts to get serious. Charlotte, played by Winona Ryder, is young, spontaneous and luminous, but seriously ill. Before dying, she is able to mature Will and teach him what it means to truly love someone.

Bridget Jones: The Edge of Reason, a 2004 comedy directed by Beeban Kidron, shows two lovers who unite despite barely knowing each other. Bridget and Mark, played by Renée Zellweger and Colin Firth, remain victims of misunderstandings and misconceptions that force them apart. Eventually, once they have developed feelings for the other, they decide to get married.

In The Longest Ride (2015), directed by George Tillman, a pair of young adults, portrayed by Scott Eastwood and Britt Robertson, fall in love despite extremely different backgrounds. But before they do, they must accept and adapt each of their lives to meet the needs of the other.

Although these stories have happy endings (in all three cases, the lovers are united more after overcoming the difficulties), sexual intercourse chronologically precedes mature and conscious choice.

The message is that sexuality can occur in a relationship at any time — even before any decision to permanently unite is made.

Although there are exceptions, such as A Walk to Remember (2002), directed by Adam Shankman, the trends are not in favour of chastity, understood as virtue that allows men and women to give themselves body and soul only to persons already chosen for life.

The word “chastity” itself is virtually taboo, associated with deprivation and believed to cause unnecessary suffering, because sexuality is viewed as something that should be lived without constraints and restrictions. Nevertheless, many young people are rediscovering the value of it, seeing it as “the salt that prevents the corruption of love,” and recognizing that love as a trend or passion may be corrupted by selfish possessiveness (which generates jealousy) or cold indifference.

Cinema can educate about chastity

The cinema has the power to educate, to transmit values and make them attractive through the stories it tells. Why not put this potential at the service of chastity? Why not tell stories in which tenderness is given space and in which the protagonists decide to experience the sexual dimension only after they have committed to each other for life?

Using sex scenes to make a film more interesting seems to indicate a lack of skill; it is the story, the script, the plot, the location and the skill of the actors that make a film interesting. What truly makes a difference, however, is the originality of the story. And today, a celibate love story would undoubtedly be very original.

Dear filmmakers, why not try it?

Cecilia Galatolo writes for Family and Media, where this article was first published. Republished with permisison.