Andrzej Sapkowski is a fantasy writer some have called the Polish Tolkien. Normally, to be called the Tolkien of any particularly country is simply to be the most successful fantasy writer there, and not to resemble Tolkien much beyond that. After all, George R.R. Martin was named the American Tolkien by Time Magazine, and a lot of moral ground separates Middle-earth from Westeros.

In the case of Sapkowski, however, the writer, like Tolkien, is Catholic. His stories about the Witcher (Polish Wiedźmin)—one of the last members of a moribund and persecuted caste of monsterslayers—showcase an ethical man in a brutal, morally ambiguous world.

While Sapkowski’s fantasy lacks the cohesiveness, craftsmanship, and overarching vision of Tolkien’s own, it retains a spirit of decency that modern ‘grimdark’ fantasy is becoming ever prouder to lack. Whether such a spirit can or ought to be called Christian simply for being decent, however, is a debate worth considering, especially when it comes to the secondary worlds involved.

One wonders to what degree Christian writers are able or obliged to reflect or recommend the Christian faith in their fiction, or even to make their protagonists good people. This question can become especially pressing when that fiction has become popular, and an author’s beliefs gain prominence.

The Witcher 3 – a game changer

While most of the five Witcher novels and two collections of short stories were first published in Poland in the 1990s, it is in the last few years, through a video game,  that the character has taken the English-speaking world by storm. The Witcher 3: Wild Hunt (2015) was a huge critical and financial success for Polish developer CD Projekt Red, selling over ten million copies and setting new industry standards for narrative, graphics, and sheer size (all told, the game can take up to 200 hours to complete).

For those whose tastes have kept them skeptical of video games as an art form—and Sapkowski himself is most vehemently one of them—The Witcher 3 is a gamechanger, with an immersive story, an enormous cultural world, and, perhaps most importantly, a functioning moral compass. As in the books, not all of which have yet been published in English translation, audiences are given a hardboiled protagonist—Geralt of Rivia—whose nobility is shrouded by the fact that he charges a fee for it. Geralt wanders the wartorn countryside, undoing the curses and slaughtering the man-eaters that make the lives of fantasy peasants unbearable.

A major film is in the works for 2018—based on the game based on the books—and CD Projekt Red faces calls for a sequel, having already harvested most of Sapkowski’s literary material.

The role of faith

While not as bleak as Martin’s Song of Ice and Fire series, the fantasy world of the Witcher is no Narnia either. It is brutal, grim, and treacherous. Its fictional cultures are polytheistic, and full of occult practices and symbolism. The fairytales and Slavic lore at the root of its fantasy are given a reality even darker than the uncensored Grimm and Perrault, with child-eating crones, the wraiths of murdered lovers, and elves bent on human genocide.

At a glance, much of it seems like stock fantasy, and it is, but one of the things that most sets the Witcher apart is that Sapkowski openly identifies as Polish Catholic. He does not seem to have said much about his faith vis-à-vis his fantasy works—his best-known quote on the matter involves his reaction to the Polish film adaptation of his work, where he says he could not utter swearwords because it was Lent. Perhaps his most remarkable words on faith come from one of his characters, a priestess of a maternal cult, who in the Last Wish tells Geralt

“I’m not a fanatic. You’ve a right to believe that we’re governed by Nature and the Force hidden within her. You can think that the gods, including my Melitele, are merely personifications of this power invented for simpletons so they can understand it better, accept its existence. According to you, that power is blind. But for me, Geralt, faith allows you to expect what my goddess personifies from nature: order, law, goodness. And hope.”

An agnostic, Geralt is respectful, but skeptical. He reiterates his position that the healing trance the priestess wants to put him under will lack efficacy without belief. She tells him it is not pointless, and for a simple reason: “It would be the first proof I’ve ever heard of that a lack of faith has any kind of power at all.” It is a memorable exchange, but the fictional world of the Witcher, like Middle-earth, has no Christianity. Even if they did, it would constitute a Christianity redefined by fictive osmosis.

The Witcher franchise has nonetheless been given extraordinary attention along the lines of faith and moral propriety. Reviewers have discussed the books’ portrayal of organized religion, and online forums are full of Christians discussing whether the game is ‘okay’ to play. Positions have come down on all sides.

Dominic Cuthbert’s review of the Witcher novel Baptism of Fire in Starburst argues that it takes a cynical stance, calling it “unsurprising…especially given the strong presence of the Catholic Church in Poland.” Cuthbert’s  assessment conflates religion and ideology, and shows how readily— even in the homeland of St. John Paul II—an outsider might overlook the Soviet and Nazi regimes. Even Tolkien wrote of death-cults—those practiced by the Numenóreans, for example—and no one would accuse Tolkien of using them to portray the Church.

As for the role-playing game, some Christian players are torn. Is it sinful, they debate, to kill fictional people, or to visit an electronic brothel? These questions are moot, since the sins are decision-based. In Witcher, you don’t have to kill innocent people, or seek the companionship of a prostitute, if you don’t want to. Temptation, as in life, answers to choice. 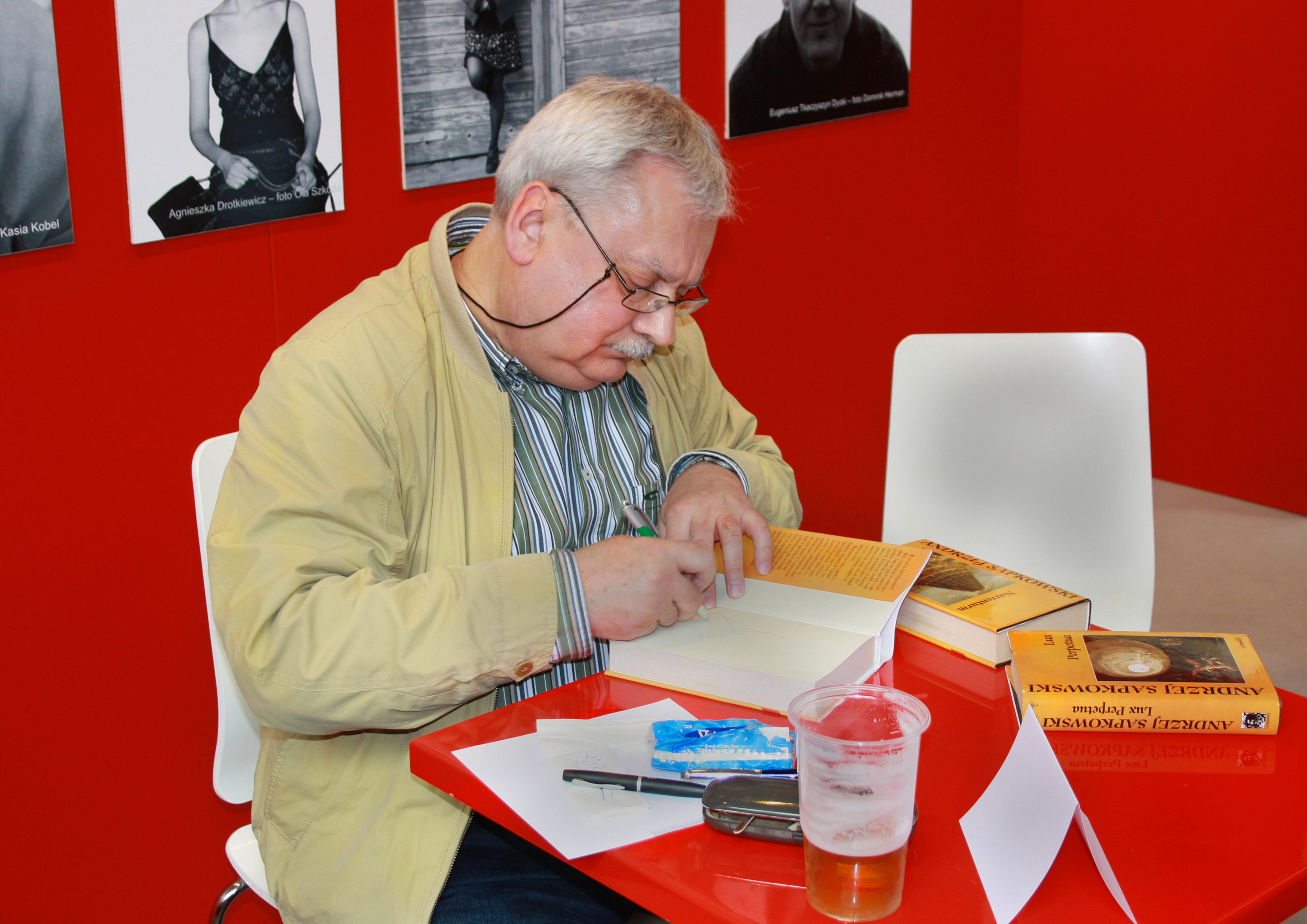 Elements of a Christian moral vision?

I have always believed that looking for Christianity in the fictional worlds of Christian authors is a lot like trying to taste wine by looking at pictures of grapes. Whatever tastes we may have, and however entitled we feel to them, they are all part of what Northrop Frye calls “the private and secret presence of literature.” This experience he likens to prayer in the Gospels, which cannot be subjected to formal interpretation.

I’ve also felt that anyone assessing a video game as an aid to or distraction from one’s faith has bigger problems than whether the game works as either. There’s no confusing the Apostles’ Creed with Assassin’s Creed. Nonetheless, there was an episode in the Witcher game which stuck out for me, as it has for many other players.

Called ‘Family Matters,’ it sees a baron and his countryside terrorized by an undead monster, which Geralt learns is that of the baron’s stillborn daughter, who was buried nameless outside the walls of his keep. Under Geralt’s guidance, the baron picks up the creature—a hideous, writhing thing called a botchling—and holds her to him. At first, the baron is full of revulsion, but as he carries the child towards her proper burial site inside the walls, and Geralt holds off the jealous wraiths who try to stop him, the man’s guilt becomes heavier. By the time he names and properly buries his daughter, the baron is a tear-choked wreck of remorse, and vows to find and care for the wife who left him. Not only is the curse lifted, but the spirit of the child helps Geralt move on with his greater quest.

Whether or not this can be called a Christian element, it is remarkably unlike other gray-world fantasy, and demonstrates a dignity for life the game shares with the literature, however muted and impotent it may seem at times. Other players, predictably, have referred to the episode as Catholic sermonizing, though I see a much more clear-cut and contrary analogue in the world’s cult of the Eternal Fire, which oversees the burning of magic users and, when those run out, nonhumans. To assume that either one represents the  author’s final word on morality or religion, however, is to succumb to the Rohrshachian impulse, and to indulge a single knee-jerk over the intellectual workout of argumentation.

The debate over ‘Christian fantasy’

Debates surrounding faith and fiction are as acrimonious as tribalism can make them, particularly where fantasy is concerned. A few years ago, I opted to review The Ring and the Cross, a scholarly collection of papers debating the presence of faith in Tolkien’s writings, for the Mythopoeic Society’s scholarly journal Mythlore. Altogether, the debate had little to do with Tolkien and The Lord of the Rings specifically, and instead begged the place of real-world faith and religious orthodoxy in both reading and literary criticism.

Most importantly, writes editor Paul E. Kerry, “readers are informed by who they are,” and there is nothing more formative than belief. As such, the label of ‘Christian fantasy’ is likely more restrictive than constructive when it comes to classifying a subgenre. For one, fantasy is almost invariably set in secondary worlds, with interior histories, characters, and circumstances beyond the Biblical purview. Second, the major ‘Christian fantasists’ such as Tolkien, Lewis, and Williams were known simply as fantasy writers in their time; their works have only recently been given the designation of Christian fantasy. Third, many people now call Christianity its own fantasy, just as angels and demons are often included alongside nymphs and norns in world mythology textbooks.

Some books speak to Christians more than others. But the same books speak to non-Christians as well, as individual imaginations and experiences are animated by the act of reading. What of those private constructs we might all point to and call anything exemplifies the slippery slope of which relativism has taken full advantage, and which has made literary studies a casualty of identity politics. We cannot find truth in fiction, but in the world of truth. Is Geralt of Rivia a good person? Sure. Is he a Christian? No. His world may offer analogues and resonance, all subject to argumentation, but shadows and shibboleths do not the Messiah remake. What deeper truths may be found in fiction must have an established touchstone beyond it, or else rhetoric—as Socrates warned in Gorgias—would be a good unto itself.

Harley J. Sims is a writer and independent scholar living near Halifax, Nova Scotia. He can be reached on his website at http://www.harleyjsims.webs.com/