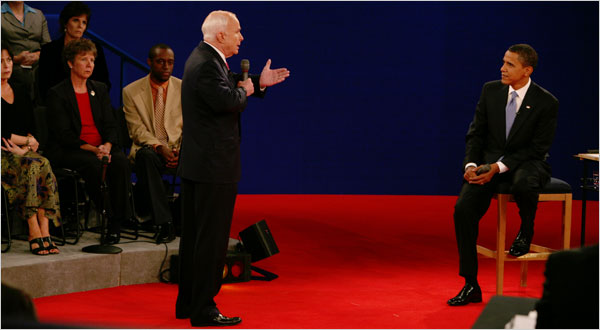 One interesting snapshot of the fundamental difference in the way
the two presidential candidates approach issues came at the point of the debate when they had already been discussing health care, and moderator Tom Brokaw asked them a swift and pointed question.

Brokaw: Quick discussion. Is health care in America a privilege, a right, or a responsibility?

McCain: I think it’s a responsibility, in this respect, in that we
should have available and affordable health care to every American
citizen, to every family member. And with the plan that — that I have,
that will do that.

But they certainly are a little nervous when Sen. Obama says, if you
don’t get the health care policy that I think you should have, then
you’re going to get fined…

Obama: Well, why don’t — why don’t — let’s talk about this, Tom, because there was just a lot of stuff out there.

Brokaw: Privilege, right or responsibility. Let’s start with that.

Obama: Well, I think it should be a right for every American…

Now, it’s true that I say that you are going to have to make sure
that your child has health care, because children are relatively cheap
to insure and we don’t want them going to the emergency room for
treatable illnesses like asthma…

Now, the final point I’ll make on this whole issue of government
intrusion and mandates — it is absolutely true that I think it is
important for government to crack down on insurance companies that are
cheating their customers, that don’t give you the fine print, so you
end up thinking that you’re paying for something and, when you finally
get sick and you need it, you’re not getting it.

I haven’t heard anyone analyze this portion of their reponses, but
their answers are revealing. In short, both candidates believe all
Americans should be covered by health care and both have policies in
mind to accomplish that. But the language tells us something more about
their (and their parties’) approach to issues, beyond this one.

Obama sees things in terms of rights, McCain in terms of
responsibilities. The Democrats and Republicans represent the attitude
of their candidates. Which reflects their view of America and
Americans. (Their difference being the role of government and
legislation in providing for the people justly and equitably.)

Language of ‘rights’ and ‘responsibilities’ can be in line with,
say, Catholic social teaching when (in the teaching of subsidiarity)
we take the responsibility to provide for people’s basic needs. I hope
that’s what both candidates are saying. When the language can be out of
line with that teaching is in the push for ’rights’ like same-sex
marriage or physician-assisted suicide, or what’s euphemistically
called ‘reproductive rights’, which really means abortion on demand.

Which brings up another point…

One thing about the debate that was obvious in its omission was
covered by different observers, one in the post-debate panel discussion
on Fox News by one of the analysts, and at NRO by Fr. Thomas Berg.

He’s disappointed in the debate.

And more than disappointed, I find myself simply amazed
that not one of the moderators thus far — Jim Lehrer, Gwen Ifill, or
Tom Brokaw — solicited the candidates’ views on abortion.

Right. It was one of the glaring omissions.

Maybe I just don’t get it. As many otherwise pro-life
Catholics voting for Obama this time around might want to remind me,
“it’s the economy, stupid” — now more than ever, right?

Indeed, the common wisdom appears to be that in election 2008, the
economy trumps every other issue in urgency and magnitude — even
abortion. If pro-lifers think the pro-choice, pro-Freedom of Choice
Act, pro-partial-birth-abortion candidate is more qualified to handle
America’s looming economic disaster, why should they hesitate to vote
for him?

Here’s a snip from that letter:

This reasoning is sound only if other issues carry the
same moral weight as abortion does, such as in the case of euthanasia
and destruction of embryos for research purposes. Health care,
education, economic security, immigration, and taxes are very important
concerns. Neglect of any one of them has dire consequences as the
recent financial crisis demonstrates. However, the solutions to
problems in these areas do not usually involve a rejection of the
sanctity of human life in the way that abortion does.

Now Berg asks what a tougher moderator should:

Do the two issues — economy and abortion — bear the same
moral weight? The bishop, standing on the consistent teaching of the
Catholic Church, says no.

As many bishops have come out in recent times and repeated…..this
unchaged teaching on the consistent ethic of life, and its primacy over
all other issues.

This episode in our country’s history will involve real
hardship for many Americans. But comparing its effects to the true
humanitarian travesty of abortion-on-demand, can we possibly believe
they hold comparable moral magnitude?

Pastor Rick Warren came the closest so far to asking the candidates
the overarching moral questions of this election, at the Saddleback
Civil Forum. Right now, it’s the moral conservatives asking them in
their blogs, columns, TV appearances and radio talk shows.

And could we talk about judges and judicial philosophy next time around?