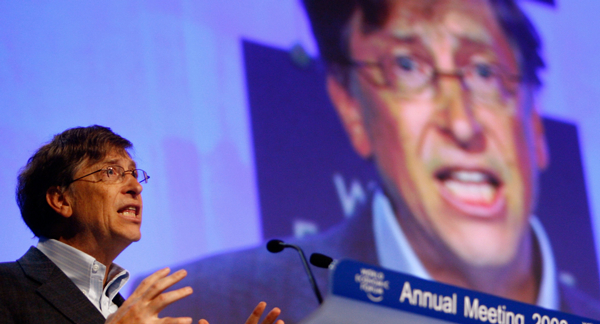 Microsoft chairman Bill Gates has been held
in awe for many years for his business acumen. But since the world’s richest
man embarked upon a career change as a global philanthropist his
self-importance has blossomed.

On the occasion of the latest global mega
gabfest known as the World Economic Forum in Davos, Switzerland, Mr Gates
granted interviews to two German newspapers to vaunt his foundation’s work, and
then to criticize and shame the Prime Minister of another European country –
Italy – for not conforming to Gates’ definition of generosity. Such effrontery
is almost unheard of. Is Bill Gates so involved in his own version of the
finest in philanthropy that he never had time to learn diplomacy, manners or
humility?

Mr Berlusconi, who has provided fodder for
the prurient international press with his peccadilloes (which occurred on his
Sardinian property and not in the government seat of power as with Bill Clinton
in the Oval Office), has become the whipping boy of Bill Gates: his is the sole
name on Gates’ “List of Shame.”
What for? For allegedly reducing foreign aid as part of the Italian
government’s budgetary measures to attempt to reduce a government deficit of
5.3 percent of GDP and an official debt of 115 percent of GDP.

Mr Gates chastised Mr Berlusconi because
Italy’s foreign aid was 0.21 percent of its GDP in 2008 compared with
top-of-the-heap Sweden with a ratio of 0.99 percent. However, Mr Gates gave a
pass to the United States which was dead last on the list of 30 OECD countries
with 0.19 percent because President Obama “proposed to double giving.”

Bill Gates is a firm believer that official
aid is a force for good, ignoring many experts’ claim that foreign aid is
significantly wasted and promotes corruption in the poorest of poor countries.
Perhaps the decision by the Italian government actually makes more sense.

Regarding the newspaper interviews, the New York Post picked up the two messages
and reported that “In a rare public jab” the Microsoft founder “ripped
Berlusconi’s ‘stinginess’ with foreign aid and put him at the top of his ‘list
of shame.’” Gates went on to further personalize his attack by stating to the Frankfurter Rundschau “Dear Silvio, I am
sorry to make things difficult for you, but you are ignoring the poor people of
the world.” Gates gave another interview with the Süddeutsche Zeitung on the same theme, embellishing his remarks with
additional shamelessness: “Rich people spend a lot more money on their own
problems – like baldness – than they do to fight malaria” – an apparent
reference to Mr Berlusconi’s meticulous attention to personal appearance.

Does being the richest man in the world
entitle Bill Gates to humiliate heads of government, duly elected in a
democracy?

The verbal assault on Mr Berlusconi was
truly inopportune, coming only a few weeks after he was physically attacked by
a deranged, hate-filled leftist at a political rally in Milan. While still in
the hospital, Mr Berlusconi sent a message expressing gratitude to Pope
Benedict XVI and others for their get well wishes, publicly forgave his
attacker and stated that “love always triumphs over envy and hatred.” Bill Gates
should take note.

In castigating the Prime Minister, Bill
Gates cast his aspersion on all of Italy too. But Italians need no lessons in
generosity from Bill Gates. One example will illustrate the point. Thousands of
Italians have dedicated their lives to alleviating poverty as missionaries who
“live where they work” in distant lands helping the poor 24/7 without media
attention. Their contribution goes beyond money and is nurtured by Caritas.

Too often Italians at all levels find
themselves being humiliated by the “holier than thou” crowd. But there has to
be some sense of awe at the contributions of Italians over the centuries. Even
on the part of Bill Gates….

In the mid 1990s, Mr Gates made an
historical purchase: Leonardo da Vinci’s Codex Leicester – the only manuscript
of the renowned Italian genius in the United States.

The Italian government museum authorities
had bid for the same document, wanting repatriation as a matter of recognition
and pride of ownership, but their budget could not match the bottomless money
pit of a determined Bill Gates who reportedly paid $31 million. Should Gates
look at the complexity of the Codex from time to time, it should give him food
for thought: this is only one of the countless works of genius produced by Italians,
something he could only buy with money – but never create!

Besides missionaries, who is helping the
poor? Surely the Bill and Melinda Gates Foundation provides plenty of
assistance through grants. Bill Gates can show lots of personal pictures, balance
sheets and even an “Annual Letter” to toot his own horn and chastise those who
do not do as he does. His
recently released 2010 letter explains how the Gateses have given away
millions of dollars for worthy causes especially for disease control and
prevention such as malaria.

But the Gates Foundation also provides
plenty of financial assistance so that certain nonprofit organizations have all
the abortifacients they need, especially in Africa. William H. Gates Sr.,
Bill’s father, who also is part of the Foundation, was once head of Planned
Parenthood. Bill Gates is in bed with the culture of death. He fully embraces
the “fewer people, better environment” ideology.

Mr Gates’ 2010 letter includes this line:
“… not spending on health is a bad deal for the environment because
improvements in health, including voluntary family planning, lead people to
have smaller families, which in turn reduces the strain on the environment.”

This is the arrogance of his kind of
philanthropy – a direct contradiction of the word’s true meaning!

On its web site, the Gates Foundation shows
a set of 15 “Guiding Principles.” Number 12 on the list states: “We demand
ethical behavior of ourselves.” Perhaps Mr Gates should reconsider the order,
making this number one – and abiding by it in dealing with others. Even with
Prime Ministers.

Vincenzina
Santoro is an international economist in New York. She represents the American Family
Association of New York at the United Nations.