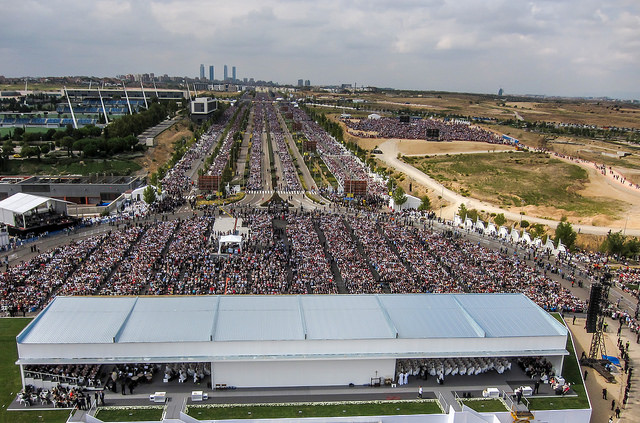 Recently the Pew Research Centre reported that nearly three-quarters of the American public sees the influence of religion waning. The headline, which I saw on my phone a couple of weeks later, made me smile because I was on my way home from a religious evenT celebrated in Madrid and Rome that drew around 200,000 people to the Spanish capital and 15,000 to the Eternal City.

After nearly two weeks of being jostled by crowds assembled from all over the world surging into churches and other venues for religious services and sightseeing, the idea that religion was losing its influence struck me as slightly ridiculous.

The events I attended concerned the beatification of Bishop Alvaro del Portillo, the second Prelate of Opus Dei, about whom Michael Cook has recently written on this site. As it is only 20 years since he died, many of those gathered to mark his elevation to the rank of “Blessed” had met him, and all were familiar with the serene, good humoured face that smiled at them from the image placed beside the altar at the various liturgical celebrations.

That smile, incidentally, was a reminder not to get upset with the over-enthusiastic fellow pilgrim jostling for a good position or standing up so as to obscure the screen relaying the main action which was out of sight for many at the different events. Of such ordinary things did the holiness of Bishop Alvaro consist.

And of his extraordinary spiritual power we were movingly reminded when, during the beatification ceremony, a Chilean boy who, as the Church affirms, owes his life and good health to the intercession of Bishop Alvaro, together with his parents, brought a relic of the new Blessed to the altar. (A video of the story of this miracle is here.)

For the beatification Mass and another of thanksgiving the following day the vast, partly developed Parque de Valdebebas on the outskirts of Madrid was meticulously prepared, with pilgrims grouped by their thousands in different areas. From this space rose the convivial chatter, the prayers, the songs and the dramatic silences of the 200,000 in a great and joyful expression of unity – aided by a common liturgical language, Latin.

This was one occasion on which “singing from the same hymn book” had absolutely no connotation of mindless conformity but manifested the – surely unique — capacity of the Catholic Church for uniting people from all points of the globe. Some 80 countries were represented, African women particularly noticeable in their trademark bright print dresses and head wraps. I even ran into a MercatorNet fan among them. 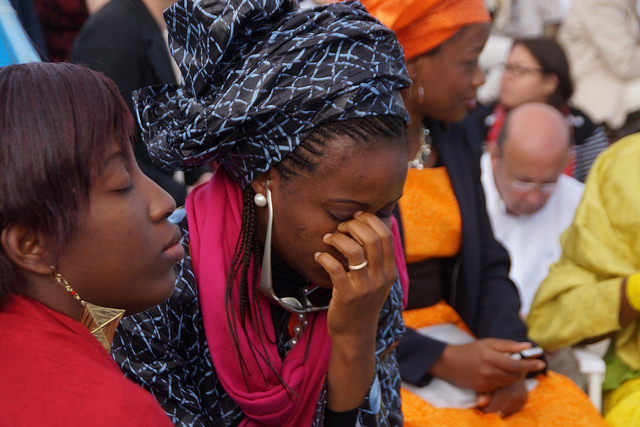 Of the 15,000 from this crowd who went on to Rome, I am sure that about 14,900 of us turned up at one or the other of thanksgiving Masses held in the great basilicas of St John Lateran and St Mary Major, while an unknown but certainly huge number overflowed the Church of St Eugene, where the remains of Blessed Alvaro were brought for veneration and a solemn Benediction. Despite the crush – or because of it — there was a wonderful sense of fraternity in the gathering.

One would have thought that the Pope’s Wednesday audience with the faithful in the expansive St Peter’s Square would have been an easy fit but, again, there was an overflow crowd, and arriving at 7 a.m. for the 9.30 fixture with Papa Francisco was not a miscalculation. We were told that Francis draws similar throngs week by week. Just two days ago he greeted them thus:

I greet the English-speaking pilgrims and visitors taking part in today’s Audience, including the various groups from England, Wales, Scotland, Ireland, Australia, Slovenia, Norway, Finland, Nigeria, Saudi Arabia, Taiwan, the Philippines, Malaysia and the United States of America.  In a particular way, my greeting goes to the ecumenical and interreligious delegation from Taiwan and the group from the Institutum Romanum Finlandiae.  Upon you and your families, I invoke joy and peace in the Lord Jesus.  God bless you all!”

Our beatification contingent was not, therefore, the only one filling the famous piazza embraced by Bernini’s colonnades, and spilling into the streets leading from it on October 1st. There were tens of thousands of other pilgrims and tourists as well. For the rest of that day, and the next, visitors queued for an hour to an hour and a half to get into St Peter’s Basilica. It was the same story at other famous pilgrimage — and tourist — sites.

Evidently, religion’s influence remains strong in some quarters – quite apart from the Muslim world – and even people who do not seem to want it for themselves often remain intrigued by it. Two days after we left Rome the Synod on the Family opened at the Vatican, drawing the eyes of the world to this effort to strengthen the Christian family and nurse the wounded. What Rome teaches still matters to the world at large.

And so it turns out that most of those in the Pew survey who agreed that its influence in American life is waning are not happy about the trend. There is increased support since 2010 for churches and other houses of worship to express their views on social and political issues and to endorse candidates for political office. While this is more marked among religiously affiliated Republicans, even the non-affiliated (“nones”, who include atheists) are not all satisfied that religion’s voice is muffled: 34 percent of nones thought that was good, but 30 percent thought it was a bad thing. Pew notes:

While it’s difficult to pin down the reasons behind these opinions, they reaffirm the notion that not all religiously unaffiliated people are hostile toward or opposed to religion. In fact,we found in 2012 that 14% of “nones” said religion is very important in their lives, and another 19% said it is somewhat important. About two-thirds of the unaffiliated (68%) believe in God – 30% said they’re “absolutely certain” about God’s existence – and 21% reported praying daily.

All of which suggests an openness to religion among people that is not being tapped by the churches and other religious organisations, but which is resistant to the aggressive secularism of the cultural elites and the media they influence.

If only those people could encounter the Christian faith, for example, with all its dignity and depth as well as fraternity and joy, as we experienced it in Madrid and Rome for two marvellous weeks; if only they could begin to understand the sources of Blessed Alvaro’s cheerful serenity – how much richer their lives could be. There is a task in this for all committed believers.