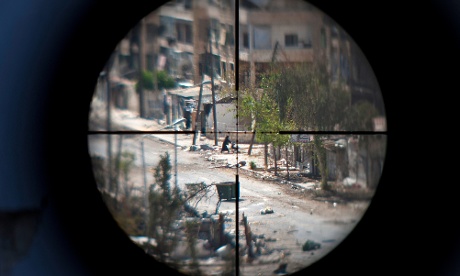 Over the past weekend, rumors began to emerge that the Syrian opposition would allow elements of the al Assad regime to remain in Syria and participate in the new government. Rumors have become Syria’s prime export, and as such they should not be taken too seriously. Nevertheless, what is happening in Syria is significant for a new foreign doctrine emerging in the United States — a doctrine in which the United States does not take primary responsibility for events, but which allows regional crises to play out until a new regional balance is reached. Whether a good or bad policy — and that is partly what the U.S. presidential race is about — it is real, and it flows from lessons learned.

Threats against the United States are many and complex, but Washington’s main priority is ensuring that none of those threats challenge its fundamental interests. Somewhat simplistically, this boils down to mitigating threats against U.S. control of the seas by preventing the emergence of a Eurasian power able to marshal resources toward that end. It also includes preventing the development of a substantial intercontinental nuclear capability that could threaten the United States if a country is undeterred by U.S. military power for whatever reason. There are obviously other interests, but certainly these interests are fundamental.

Therefore, U.S. interest in what is happening in the Western Pacific is understandable. But even there, the United States is, at least for now, allowing regional forces to engage each other in a struggle that has not yet affected the area’s balance of power. U.S. allies and proxies, including the Philippines, Vietnam and Japan, have been playing chess in the region’s seas without a direct imposition of U.S. naval power — even though such a prospect appears possible.

The roots of this policy lie in Iraq. Iran and Iraq are historical rivals; they fought an extended war in the 1980s with massive casualties. A balance of power existed between the two that neither was comfortable with but that neither could overcome. They contained each other with minimal external involvement.

The U.S. intervention in Iraq had many causes but one overwhelming consequence: In destroying Saddam Hussein’s regime, a regime that was at least as monstrous as Moammar Gadhafi’s or Bashar al Assad’s, the United States destroyed the regional balance of power with Iran. The United States also miscalculated the consequences of the invasion and faced substantial resistance. When the United States calculated that withdrawal was the most prudent course — a decision made during the Bush administration and continued by the Obama administration — Iran consequently gained power and a greater sense of security. Perhaps such outcomes should have been expected, but since a forced withdrawal was unexpected, the consequences didn’t clearly follow and warnings went unheeded.

If Iraq was the major and critical lesson on the consequences of intervention, Libya was the smaller and less significant lesson that drove it home. The United States did not want to get involved in Libya. Following the logic of the new policy, Libya did not represent a threat to U.S. interests. It was the Europeans, particularly the French, who argued that the human rights threats posed by the Gadhafi regime had to be countered and that those threats could quickly and efficiently be countered from the air. Initially, the U.S. position was that France and its allies were free to involve themselves, but the United States did not wish to intervene.

This rapidly shifted as the Europeans mounted an air campaign. They found that the Gadhafi regime did not collapse merely because French aircraft entered Libyan airspace. They also found that the campaign was going to be longer and more difficult than they anticipated. At this point committed to maintaining its coalition with the Europeans, the United States found itself in the position of either breaking with its coalition or participating in the air campaign. It chose the latter, seeing the commitment as minimal and supporting the alliance as a prior consideration.

Libya and Iraq taught us two lessons. The first was that campaigns designed to topple brutal dictators do not necessarily yield better regimes. Instead of the brutality of tyrants, the brutality of chaos and smaller tyrants emerged. The second lesson, well learned in Iraq, is that the world does not necessarily admire interventions for the sake of human rights. The United States also learned that the world’s position can shift with startling rapidity from demanding U.S. action to condemning U.S. action. Moreover, Washington discovered that intervention can unleash virulently anti-American forces that will kill U.S. diplomats. Once the United States enters the campaign, however reluctantly and in however marginal a role, it will be the United States that will be held accountable by much of the world — certainly by the inhabitants of the country experiencing the intervention. As in Iraq, on a vastly smaller scale, intervention carries with it unexpected consequences.

These lessons have informed U.S. policy toward Syria, which affects only some U.S. interests. However, any U.S. intervention in Syria would constitute both an effort and a risk disproportionate to those interests. Particularly after Libya, the French and other Europeans realized that their own ability to intervene in Syria was insufficient without the Americans, so they declined to intervene. Of course, this predated the killing of U.S. diplomats in Benghazi, Libya, but it did not predate the fact that the intervention in Libya surprised planners by its length and by the difficulty of creating a successor regime less brutal than the one it replaced. The United States was not prepared to intervene with conventional military force.

That is not to say the United States did not have an interest in Syria. Specifically, Washington did not want Syria to become an Iranian puppet that would allow Tehran’s influence to stretch through Iraq to the Mediterranean. The United States had been content with the Syrian regime while it was simply a partner of Iran rather than Iran’s subordinate. However, the United States foresaw Syria as a subordinate of Iran if the al Assad regime survived. The United States wanted Iran blocked, and that meant the displacement of the al Assad regime. It did not mean Washington wanted to intervene militarily, except possibly through aid and training potentially delivered by U.S. special operations forces — a lighter intervention than others advocated.

The U.S. solution is instructive of the emerging doctrine. First, the United States accepted that al Assad, like Saddam Hussein and Gadhafi, was a tyrant. But it did not accept the idea that al Assad’s fall would create a morally superior regime. In any event, it expected the internal forces in Syria to deal with al Assad and was prepared to allow this to play out. Second, the United States expected regional powers to address the Syrian question if they wished. This meant primarily Turkey and to a lesser degree Saudi Arabia. From the American point of view, the Turks and Saudis had an even greater interest in circumscribing an Iranian sphere of influence, and they had far greater levers to determine the outcome in Syria. Israel is, of course, a regional power, but it was in no position to intervene: The Israelis lacked the power to impose a solution, they could not occupy Syria, and Israeli support for any Syrian faction would delegitimize that faction immediately. Any intervention would have to be regional and driven by each participant’s national interests.

The Turks realized that their own national interest, while certainly affected by Syria, did not require a major military intervention, which would have been difficult to execute and which would have had an unknown outcome. The Saudis and Qataris, never prepared to intervene directly, did what they could covertly, using money, arms and religiously motivated fighters to influence events. But no country was prepared to risk too much to shape events in Syria. They were prepared to use indirect power rather than conventional military force. As a result, the conflict remains unresolved.

We see this doctrine at work in Iran as well. Tehran is developing nuclear weapons, which may threaten Israel. At the same time, the United States is not prepared to engage in a war with Iran, nor is it prepared to underwrite the Israeli attack with added military support. It is using an inefficient means of pressure — sanctions — which appears to have had some effect with the rapid depreciation of the Iranian currency. But the United States is not looking to resolve the Iranian issue, nor is it prepared to take primary responsibility for it unless Iran becomes a threat to fundamental U.S. interests. It is content to let events unfold and act only when there is no other choice.

Under the emerging doctrine, the absence of an overwhelming American interest means that the fate of a country like Syria is in the hands of the Syrian people or neighboring countries. The United States is unwilling to take on the cost and calumny of trying to solve the problem. It is less a form of isolationism than a recognition of the limits of power and interest. Not everything that happens in the world requires or justifies American intervention.

If maintained, this doctrine will force the world to reconsider many things. On a recent trip in Europe and the Caucasus, I was constantly asked what the United States would do on various issues. I responded by saying it would do remarkably little and that it was up to them to act. This caused interesting consternation. Many who condemn U.S. hegemony also seem to demand it. There is a shift under way that they have not yet noticed — except for an absence that they regard as an American failure. My attempt to explain it as the new normal did not always work.

Given that there is a U.S. presidential election under way, this doctrine, which has quietly emerged under Obama, appears to conflict with the views of Mitt Romney, a point I made in a previous article. My core argument on foreign policy is that reality, not presidents or policy papers, makes foreign policy. The United States has entered a period in which it must move from military domination to more subtle manipulation, and more important, allow events to take their course. This is a maturation of U.S. foreign policy, not a degradation. Most important, it is happening out of impersonal forces that will shape whoever wins the U.S. presidential election and whatever he might want. Whether he wishes to increase U.S. assertiveness out of national interest, or to protect human rights, the United States is changing the model by which it operates. Overextended, it is redesigning its operating system to focus on the essentials and accept that much of the world, unessential to the United States, will be free to evolve as it will.

This does not mean that the United States will disengage from world affairs. It controls the world’s oceans and generates almost a quarter of the world’s gross domestic product. While disengagement is impossible, controlled engagement, based on a realistic understanding of the national interest, is possible.

This will upset the international system, especially U.S. allies. It will also create stress in the United States both from the political left, which wants a humanitarian foreign policy, and the political right, which defines the national interest broadly. But the constraints of the past decade weigh heavily on the United States and therefore will change the way the world works.

The important point is that no one decided this new doctrine. It is emerging from the reality the United States faces. That is how powerful doctrines emerge. They manifest themselves first and are announced when everyone realizes that that is how things work.

George Friedman is chief executive officer of Stratfor, the world’s leading online publisher of geopolitical intelligence.  This article has been republished with permission of Stratfor.