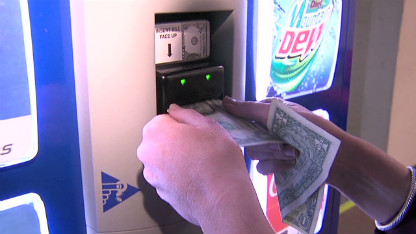 At Shippensburg University, female students who hook-up for drunken sex on Saturday will find it easy to dispose of just-conceived babies on Monday or Tuesday. A quick trip to the vending machine is all it takes.

Easy. Kind of like buying a bag of Doritos.

Women who wake up in unfamiliar beds or sober up and wonder, “What were you thinking, girl?” needn’t worry much. Stride across campus, past the dining hall (grab a doughnut for later), and into the University Health Center. Flash a student ID and head to the vending machine in the “self-help” area. There, next to the cough drops and Mucinex, in discreet, feminine packaging, is Plan B One Step. No questions asked. Feed the bills into the slot, grab and go. Empowered with “choices,” these women pop the package blister, swallow the pill, and breathe easy.

Only it’s really not.

Billed as “emergency contraception,” according to the package insert, Plan B inhibits ovulation and thus prevents conception. But it also alters the lining of the uterus, preventing a newly conceived child from implanting in its mother’s womb.  Without implantation, that tiny human being cannot draw nourishment and will die. (Occasionally, Plan B fails and the pregnancy continues.)

In most cases, however, Plan B succeeds.

But “success” is not pretty. Our Shippensburg student will have a one-in-three chance of heavy bleeding. And 13% of women who take Plan B One Step end up curled up in bed with nausea, abdominal pain, and fatigue. Worse, nearly one in ten women who use emergency contraception (compared to 2% of pregnancies in the general population) develop severe abdominal pain and require emergency treatment for an ectopic pregnancy.

But no worries, this is a private decision between a woman and her vending machine.

(Maybe the Supreme Court should update that hallowed language about abortion being a private medical decision between a woman and her doctor, eh?)

Back in Shippensburg, it’s been a bad few days for the University’s PR team–one negative link on Drudge would keep anybody hopping—and they’re feeling a bit defensive. “We’re not the first” to make Plan B available on a college campus, they say.

But from a vending machine?

Has our culture so trivialized sex and baby-making that the ‘solution’ to an unintended pregnancy comes out of a vending machine? And the grown-ups in the room don’t even blink?

Shippensburg’s decision seems destined to create a campus norm of casual sex. But in its February 7 statement, the University asserted that it’s “not encouraging anyone to be sexually active. That is a decision each student makes on his or her own.”

In a phone interview February 7, Dr. Peter M. Gigliotti, Executive Director for University Communications & Marketing, said the university installed the vending machine “several years” ago after a student survey showed that 85% of students favored on-campus access to emergency contraception. He defended the decision, expressed surprise at the media coverage, and insisted that no one under the age of 17 has access to the vending machine. (By law, Plan B cannot be dispensed to anyone under 17 without a prescription.)

In Shippensburg’s public statement, Dr. Robert Serr, Vice-President for Student Affairs, also downplayed the disclosure and framed the issue as support for reproductive choice: “Reproductive services are a personal decision to be made by every man and woman. As such, the university is providing students with a medication that they can obtain legally elsewhere as part of their ability to make their own choices.”

That attitude is precisely the problem.

“Emergency contraception” dispensed from a vending machine is the perfect icon of our culture’s impersonal–and utilitarian–view of sex and reproduction.

To the women of Shippensburg University: wake up! What could be more lonely than heading across a cold Pennsylvania campus “the morning after”, alone, to rendezvous with a vending machine? It’s an automated “problem-solver”, stoically dispensing drugs that not only kill your baby but also numb your heart. All so you can go back and do it again.

That’s not “choice”. It’s exploitation. And people who really care about you won’t exploit you.

Because you deserve better.