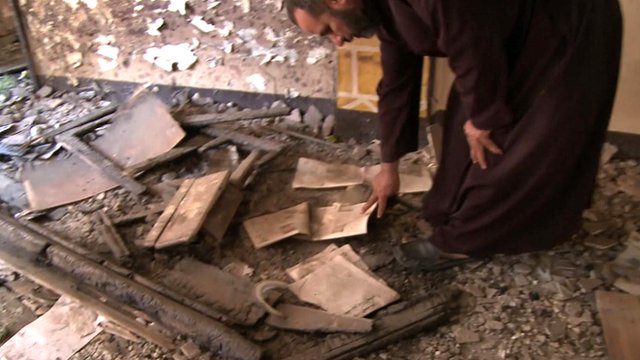 It’s about Islamic purification, and it’s about time for world leaders and media to address it.

Led by the Muslim Brotherhood, and joined by various other Islamist groups, some hoisting al-Qaeda flags, a ruthless campaign of religious cleansing, of Islamic “purification,” is well underway in Egypt. As jihad has come to the Arab world’s largest country, our foreign-policy leaders and press ignore this turn of events at our peril.

But as she noted in an earlier piece, the US has been indifferent. And Coptic Church leaders have called out media that are either indifferent to the devolving reality in Egypt or worse.

Egypt’s Orthodox Coptic Church lashed out at Western media coverage of the recent violence in its country, saying “read objectively the facts of events and [don’t] give international and political cover to these terrorist and bloody groups.”

But they are, and the violence has grown to historic proportions.

For 67 years, the Virgin Mary Church has been a peaceful refuge for Shenouda El Sayeh, much like the Giza province village of Kafr Hakim where it rests and where he has lived all those years.

But, as he swept its floors on Thursday, it was painfully obvious things had changed.

The night before, a mob — chanting against Coptic Christians such as El Sayeh and calling for Egypt to become an “Islamic state” — had torched and looted the Virgin Mary Church.

“I didn’t expect this to happen,” El Sayeh said.

He’s not alone. Christians all around Egypt are cleaning up in the aftermath of a spate of attacks, which came on the country’s deadliest day since the 2011 revolution that overthrew longtime President Hosni Mubarak.

Or longer. The AP:

Egyptian scholar Samuel Tadros says Islamists enraged by the overthrow of President Mohammed Morsi have attacked more than 50 churches, destroying at least 20 and setting many of them on fire.

Tadros, a Research Fellow at the Hudson Institute’s Center for Religious Freedom, says Wednesday appears to have been the worst single day of violence against Egypt’s Coptic church since the 14th century.

For the first time in 1,600 years, Sunday prayers were canceled at the Orthodox Monastery of the Virgin Mary and Priest Ibram in Degla, south of Minya, because the three churches there were destroyed by the mob. In Cairo, Franciscan nuns watched as the cross over the gate to their school was torn down and replaced by an al-Qaeda flag and the school itself torched; Sister Manal, the principal, reported that three nuns were then marched through the streets as prisoners of war, as neighborhood mobs “hurled abuse” at them along the way.

Christians became the target of violence and vandalism in Egypt this last week, with dozens of churches being sacked and torched by Islamist supporters of ousted president Mohammed Morsi. Today the Associated Press carried this report from Hamza Hendawi:

After torching a Franciscan school, Islamists paraded three nuns on the streets like “prisoners of war” before a Muslim woman offered them refuge. Two other women working at the school were sexually harassed and abused as they fought their way through a mob. …

Sister Manal [the principal of the Franciscan school in Bani Suef] recalled being told a week earlier by the policeman father of one pupil that her school was targeted by hard-line Islamists convinced that it was giving an inappropriate education to Muslim children. She paid no attention, comfortable in the belief that a school that had an equal number of Muslim and Christian pupils could not be targeted by Muslim extremists. She was wrong…

“We are nuns. We rely on God and the angels to protect us,” she said. “At the end, they paraded us like prisoners of war and hurled abuse at us as they led us from one alley to another without telling us where they were taking us,” she said. A Muslim woman who once taught at the school spotted Manal and the two other nuns as they walked past her home, attracting a crowd of curious onlookers.

“I remembered her, her name is Saadiyah. She offered to take us in and said she can protect us since her son-in-law was a policeman. We accepted her offer,” she said. Two Christian women employed by the school, siblings Wardah and Bedour, had to fight their way out of the mob, while groped, hit and insulted by the extremists. “I looked at that and it was very nasty,” said Manal.

The incident at the Franciscan school was repeated at Minya where a Catholic school was razed to the ground by an arson attack and a Christian orphanage was also torched.

This toll is already a few days old, and growing.

Nina Shea updates as of Monday.

As of Sunday night, some 58 churches, as well as several convents, monasteries, and schools, dozens of Christian homes and businesses, even the YMCA, have been documented as looted and burned or subject to other destruction by Islamist rioters. The Coptic Pope remains in hiding and many Sunday services did not take place as Christian worshipers stayed home, fearing for their lives. A dozen or so Christians have been attacked and killed for being Christian so far.

For the first time in 1,600 years, Sunday prayers were canceled at the Orthodox Monastery of the Virgin Mary and Priest Ibram in Degla, south of Minya, because the three churches there were destroyed by the mob. In Cairo, Franciscan nuns watched as the cross over the gate to their school was torn down and replaced by an al-Qaeda flag and the school itself torched; Sister Manal, the principal, reported that three nuns were then marched through the streets as prisoners of war, as neighborhood mobs “hurled abuse” at them along the way.

Fr. Rafic Greiche, spokesman of Egypt’s Catholic Bishops reported to the Vatican news agency Fides that of the destroyed churches, 14 are Catholic, while the rest belong to the Coptic Orthodox, Greek Orthodox, Anglican, and Protestant communities. While the anti-Christian attacks are occurring throughout Egypt, they are concentrated especially in the areas of Al Minya and Assiut, “because it is there that we find the headquarters of the jihadists,” according to Fr. Greiche.

Groups of the Left, of women, of students, of intellectuals, of businesspersons, of secularists, not to mention the military, all participated in the Tamarrud movement that supported the military’s ouster of the Muslim Brotherhood–affiliated President Morsi. But it is Egypt’s Christian community, who number 10 percent of the population, that is bearing the brunt of the Islamist anger.

Pope Francis is speaking out, frankly and clearly. “Faith and violence are incompatible,” he said. That should be stating the obvious. But it no longer is.

What are world leaders doing about this? What are the world’s media doing to call attention to it? What is our responsibility in this, and the violence in Syria, North Korea, the Central African Republic? First, be informed.