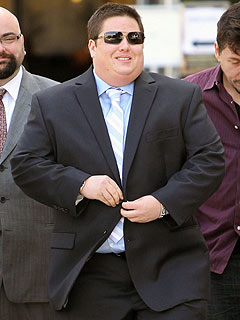 A year after undergoing a sex change, Chaz Bono is now legally a man, reports People.com.

A Santa Monica, Calif., judge granted the political and social activist’s petition for a gender and name change Thursday, according to a spokesperson for the Transgender Law Center, which represented Bono.

“Chaz couldn’t be happier,” says Kristina Wertz, legal director for the Transgender Law Center. “This is an important step in his transition and will allow him to change a variety of his identity documents to show who he truly is.”

Who he truly is? Couldn’t be happier?

Well, it’s hard to tell from the photo. What we see is actually very sad: a morbidly obese woman dressed as a man, whose effort at a smile is not very convincing and whose eyes are hidden behind dark glasses.

Chaz, 41, told People last December that the sex change process meant, “I finally get to live my life the way I’ve always wanted to.” But doing what you want with your body is no guarantee of happiness, as other people who have had sex changes have discovered.

And if it doesn’t work out for you, that will be just another story for the entertainment pages, which is where CNN filed this one — perhaps because his parents Cher and Sonny Bono were pop singers. It seems pretty heartless all the same.

But, as the saying goes, “That’s entertainment.”

Thanks to Matthew Mehan for this tip.