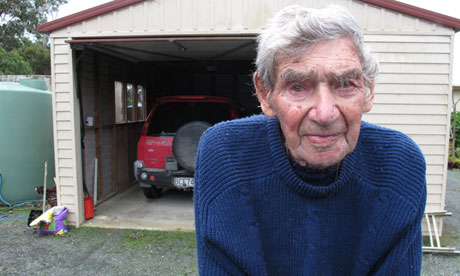 We saw this very sweet story a couple of weeks ago on television about one of the oldest drivers in the world. 105 year old Bob Edwards has been a licensed driver since 1925 – 88 years ago! And what made it nearly front page news here is that he’s a New Zealander! Woohoo! And he’s making the British papers – someone has noticed us! Our inferiority complex is slightly lessened…(but he was originally from Britain – shhhhh, don’t mention that!)

But I digress. When Bob first learnt to drive it was in a French car that used a lever instead of a steering wheel! Shortly after receiving his license, he saw an advertisement for young men to go live and work farms in Britain’s colonies. After turning down Canada and Australia, the seventeen year old decided on New Zealand (smart boy).  Since then, he has driven constantly, and was involved in just one crash and has been issued only one speeding ticket – although he rankles at the injustice of the latter. He is still driving now, mainly to do the shopping:

“These days, Edwards drives about three times a week to the store which is 9 miles (15km) down the road. He picks up groceries on Sundays and the newspapers on other days.”

According to the BBC, he cooks all the meals for his wife who is 91. So he is active, healthy and a cook – his wife is very lucky! And if you take a look at the videos in the links provided, you will see what an extraordinarily active and young looking 105 year old Bob is. I wonder if Bob is a sign of things to come – more and more elderly drivers as the population in the West ages. If that is the case, then we may have to adapt to a world where rush hour occurs around lunchtime and the fast lane is filled with cars going 65km/hour. We’ll probably be all the safer because of it.