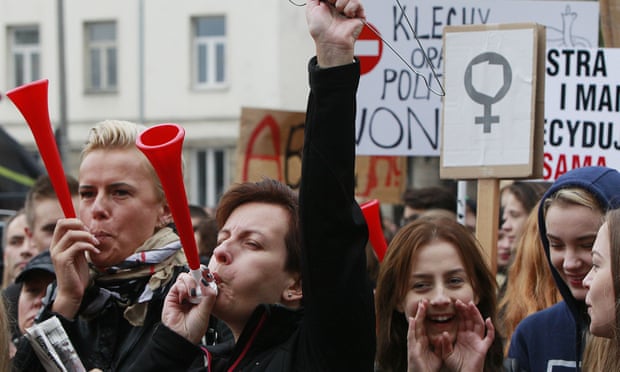 Photo: Czarek Sokolowski/AP via The Guardian

There have been extraordinary scenes in Poland this week as first, tens of thousands of people dressed in black took to the streets on Monday protesting against legislation proposing a total ban on abortion; and second, in the Polish parliament last night as members of the governing Law and Justice Party (PiS) who had backed the bill just two weeks ago withdrew their support.

The law changes, initiated by the legal institute Ordo Iuris and the Stop Abortion coalition, and supported by 100,000 signatures, would remove the three exceptions for abortion in an already very restrictive law by European standards. These are: when the woman’s life or health is endangered; when the pregnancy is the result of a criminal act; when the baby appears to be severely and irreversibly disabled, or has an incurable or life-threatening disease.

When the bill was presented in the Sejm, every member of the national-conservative PiS voted for it to progress to the committee stage. But Monday’s “black protests” seem to have unnerved some of them and the health committee yesterday recommended that the bill be rejected. Parliament will now have the opportunity to throw out the legislation altogether, or to refer it back to committee.

For anyone who still thinks of Poland as the Catholic country that broke through the Iron Curtain under the leadership of its charismatic son, Karol Wojtyla, or Pope John Paul II, Monday’s young women in black raging about abortion rights is indeed a shocking phenomenon. It was as though they hankered after the Communist era.

Oddly enough, a higher proportion of women (40 percent) voted last year for the PiS — with its resistance to European secularism and embrace of family values — boosting the party’s majority in parliament.

Poland, a safe place to give birth

Regarding the abortion issue, here’s something else that’s ironic.

If a woman in Europe could choose the safest country in which to give birth to a child, she could take her pick of Finland, Greece or Poland. All three countries had maternal mortality rates of 3 deaths per 100,000 live births in 2015, according to the World Bank. In the UK the figure was 8 — the average for the European Union – and in France it was 9 deaths.

Compared with 1990, those figures represent small changes, except for France, where 15 mothers per 100,000 had died in childbirth, and Poland, where the figure had been 17. This represents an increase in safety for mothers in Poland of over 500 percent in the last 25 years.

Interestingly, this dramatic reduction in the risks of childbirth has taken place during a period when abortion was severely restricted by law. This has also been documented in Chile where, as in Poland, abortion was banned after a period when it was legal and widespread.

The 1993 law with its three exceptions, was regarded as a compromise and a section of the population has never been happy with it. The bill now before the Sejm, and looking doomed, would remove the concessions made more than two decades ago, not to discriminate against women but to stop discrimination against children before they are born.

Still it is not as draconian as some have made out. According to the bill drafted by Ordo Uris earlier this year, the proposed changes do not mean:

* That any pregnant woman must give up her life to save her baby. Doctors would be permitted to undertake any medical treatment to save the life of the mother, even if it may result in fatal consequences for the child – as, for example, in the case of an ectopic pregnancy.

(Since the intention in such cases is to save the mother, not to kill the child, it is in a different moral category from abortions “for the health of the mother” – an exception that has become a very wide rule in many countries, wide enough to include anxiety about an unplanned pregnancy.)

* That a woman will automatically go to jail for having an abortion. The drafters say that “even if a mother deliberately deprives her conceived child of life, judges have the discretion to waive punishment in the case of extenuating circumstances. The penalty [between three months and five years] is first and foremost directed at those who conduct the abortion, provide the woman with abortive resources, or those who force her to abort.”

* That pre-natal testing would be precluded, as some rumours have alleged.

However, the draft does mean that rape and incest are not accepted as a reason for taking the life of a child.

A positive vision: protection of the child and family culture

To understand the positive intent of the proposed law one only has to read the title: “An Act on comprehensive protection of human life and on family education”. It takes its cue from two sources of principles regarding the right to life.

The first is the Polish Constitution, which mandates legal protection for the life of every human being. The Polish Constitutional Tribunal has ruled that this applies to life from the moment of conception, and that any doubt should be resolved in favour of that principle.

The second source is United Nations instruments: the Declaration of the Rights of the Child and the Convention on the Rights of the Child. These stipulate that children, by reason of their physical and mental immaturity, need special safeguards and care, including appropriate legal protection before and after birth.

Though it removes the exceptions for rape and fetal anomaly, the bill requires the state to support families raising children with disabilities or who are conceived by rape.

“School curricula shall include family life education including knowledge of the principles of responsible parenthood as well as family values and the value of human life since conception until natural death. The education in this field shall respect moral norms of parents and students’ sensitivity. Participation in classes requires the written consent of parents or adult students.”

All this is perfectly logical for anyone who regards themselves as pro-life or against abortion. How that aim is pursued will vary according to the prevailing culture. In Poland, a 2013 poll showed that 75 percent of Poles believe that abortion is “wrong” and “not justifiable under any circumstances.” In May this year the same percentage supported the legal status quo. And yet in three months this year the PRO Foundation gathered 100,000 signatures for its Stop Abortion petition.

If Poles are ambivalent about what kind of law they want, that is not the case among the European sexual liberals (and their inter-continental supporters) who are adding their weight against a law that protects not only the unborn child but the health of mothers – and promotes a family culture that would reduce unwanted (out-of-wedlock) pregnancies.

The European Parliament was due on Wednesday to debate “women’s rights/equal opportunities” in Poland, even though there is no right to abortion in EU treaties. As Poland’s prime minister Beata Szydlo said earlier in the week, the EU had not drawn lessons from Brexit and kept on “dealing with made-up problems”.

The real problems of Poland and Europe at large include the decline of marriage and a critically low birth rate combined with an ageing population in most countries. Polish women will have on average only 1.33 children. This is not only below what can sustain the nation – without a flood of immigrants, something that most Poles do not want – but it is also likely to be less than most Polish couples want.

How long will it take the young women who were hollering for abortion rights on the streets of Poland on Monday to realise where their real interests lie?