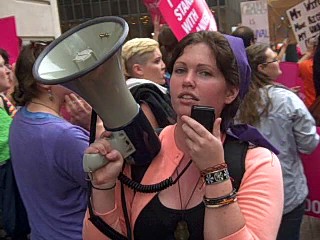 A majority of Americans are opposed to abortion, and recognizing it is legal, the majority have expressed that they don’t want their tax dollars to be spent on assisting the abortion industry. The effort in Congress to de-fund Planned Parenthood has grown emotional and tense at times, with dramatic claims made by abortion supporters in defense of federal funding for Planned Parenthood. This issue needs clarity.

CatholicVote.org has been monitoring it all closely, working with members of the bi-partisan congressional effort to de-fund Planned Parenthood. Brian Burch issued a press release revealing their latest video message. He said:

This is one of the most agonizing videos we have ever produced.

Two weeks ago we sent our media team into the middle of a rally organized to defend taxpayer funding for Planned Parenthood.

They wanted abortion supporters to be heard, speaking for themselves and their beliefs.

What we witnessed left us speechless.

The abortion industry is often portrayed as a big-hearted caring industry that simply wants to serve low-income women. Their supporters claim that stripping Planned Parenthood and abortion providers of taxpayer funds will hurt everyone.

Of course this is a lie. Planned Parenthood is billion-dollar organization that is chiefly concerned with one thing — the destruction of innocent human life.

Some of the footage we captured will shock you. Some of it will make you sad…

The fight over taxpayer support for Planned Parenthood is about much more than budgets and deficits. The fight is ultimately about our vision for America — a vision that cherishes mothers, families and the gift of human life.

Our vision is one of hope. Theirs is filled with anger and hopelessness.

And they’re speaking for themselves.