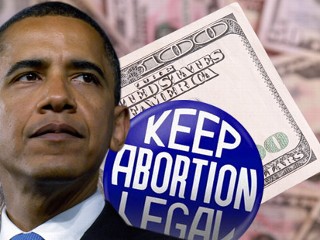 Barack Obama has long said he wants to reduce the number of
abortions. Only in office a few days, he quickly acted in direct
opposition to that end.

The new civil rights movement is about life and human dignity
according to the truth about the human person. Many prominent people in
that movement have extended to Obama a measure of hopeful and
charitable goodwill since election day and through the transition
period that he would moderate his known abortion extremism and see how
radically it violates human rights. MercatorNet’s Deputy Editor Carolyn Moynihan wrote in a newsletter on Friday:

In spite of everything Mr Obama has said in the past in
favour of liberal abortion policies, we had hoped his desire for
inclusiveness and national unity would prevent such a step. He has
immediately dashed hopes and made it more difficult to trust his
judgement on other issues.

Fr. Frank Pavone, hopeful but realistic before, was quick to respond.

“When President Obama takes money out of taxpayers’
pockets to abort children, he can no longer claim with any legitimacy
that he wants to reduce the number of abortions performed here or
abroad,” said Fr. Pavone. “Forcing Americans to pay for the killing of
innocents will not ‘bring us together;’ there can be no common ground
when the ground is soaked with innocent blood.”

The Vatican said even more.

Monsignor Rino Fisichella, who heads the Vatican’s
Pontifical Academy for Life, urged Obama to listen to all voices in
America without “the arrogance of those who, being in power, believe
they can decide of life and death.”

Fisichella said in an interview published Saturday in Corriere della
Sera that “if this is one of President Obama’s first acts, I have to
say, in all due respect, that we’re heading quickly toward
disappointment.”

This was three days after taking office. It’s drew a line.

“This deals a harsh blow not only to us Catholics but to
all the people across the world who fight against the slaughter of
innocents that is carried out with the abortion,” another top official
with the Academy for Life, Monsignor Elio Sgreccia, told the ANSA news
agency.

“Among the many good things that he could have done, Barack Obama instead chose the worst,”…

He has made sure countless human beings will have no hope for even
the chance at life. And he has committed taxpayer funds to ensure it.