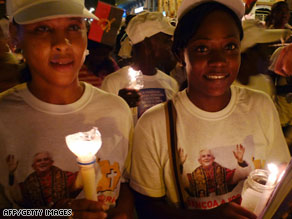 As he flew from Rome
to Cameroon for his first African trip, Benedict XVI held a press
conference. He spoke of many things relevant to Africa: the credit
crisis, its ethical dimension, its social welfare dimension;
solidarity between the developed and developing world; corruption;
the vibrancy of the faith and energy of the people; how he hopes to
implement Catholic social teaching; and a forthcoming Synod of
African Bishops. He even rebutted suggestions that he was “lonely”
in the Vatican.

Yet what did the
media pick up? That the Pope is opposed to condoms as a solution to
Africa’s supposedly overwhelming problem: AIDS. And, in fact, he
was right to say that condoms are only making the problem worse.

The media slant is
that the Catholic Church is run by elderly celibate men who are out
of touch with the needs of married couples, “sexually-active”
adolescents, and the sick and suffering. Out of touch? Really?

Go to any remote
corner of sub-Saharan Africa and, if you find anyone there caring for
these people, it will be missionaries, religious brothers and sisters
and dedicated lay people. They will be building and running schools,
condom-less dispensaries, and orphanages, giving pastoral attention
in displacement camps to traumatized war victims and raped women,
sinking boreholes and constructing cattle-dips.

It is not easy to
say what the “main problem” of Africa is, but it’s not AIDS,
any more than the main problem of the developed world is heart
disease, cancer, obesity or STDs. These are signs of the deeper
problems of self-indulgence and an unhealthy lifestyle. AIDS, too, is
a symptom, but of different problems: war, famine, drought, chaotic
urban migration and the resulting poverty, lack of medicines and
properly equipped medical centres and trained personnel, traditional
practices such as wife-inheritance, witchcraft and superstition, and
rape as a weapon of war.

Certainly material
poverty is ubiquitous in Africa. But the cause is not just AIDS.
Poverty is caused by erratic climate patterns; by greedy, corrupt
leaders; by conflict over resources; by slow and corrupt
bureaucracies; by apathy and a “hand-out” mentality; by land
disputes; by ethnic differences exploited by politicians; by
illiteracy; by an ever-widening gap between rich and poor, by being
pushed around at North-South trade meetings.

These are some of
Africa’s “main problems”, but they are seldom mentioned in the
international media. Hence, in New York and London, Africa is just
AIDS, war and savagery.

What a pity. The
media could do so much to portray the real Africa. Every African
country has its generation of old men and women. When each of them
dies a library will be destroyed. Even if they are illiterate, they
have a phenomenal knowledge of the rich local fauna and flora,
customs and history, and a sharp understanding of human psychology,
unspoilt by television and advertising.

Imagine a Ugandan
who has lived through the attack on the Kabaka (the King) and his
flight to Britain, the hazardous years of Idi Amin, the bush war of
1980 to 1986, the 20-year insurgency of Joseph Kony and his LRA rebel
army. Or a Kenyan who ran errands for the Mau Mau rebels in the
1950s, saw independence granted and 45 shaky years later, lost his
land and property in the incredible (to Kenyans) violence of one year
ago which pitted tribe against tribe.

Imagine what
fascinating stories these people have to tell of courage, sacrifice,
adventure, family pride, heroism, political intrigue and personal
disillusionment. Is all this to be left only to novelists and as a
backdrop to Hollywood films?

Where were the
Western media, anyway, except for a handful of hardy journalists,
when Rwanda blew up in 1994? Did journalists ever visit neighbouring
Burundi which, over the years, has had similar genocidal killings on
a slightly less grand scale? How many are chronicling the chaos in
eastern Congo where between 4.5 and 6 million people are estimated to
have died since the ousting of Mobutu, mainly from starvation and
disease, and where thousands of women have been raped and the towns
are still crowded with street children and orphans?

And why aren’t the
media covering the multinationals which dig out precious minerals
for the developed world — like coltan for mobile phones? At the end
of the 19th century Africa was plundered for its ivory; now it is
tantalum, tungsten, platinum, mahogany and oil. Where do you read
about this?

From his regular
meetings with bishops and briefings from his nuncios, the Pope knows
the joys and the wretchedness of Africa far better than the media, as
his addresses in Cameroon and Angola showed during his trip. If
anyone is qualified to pontificate about Africa, it is Benedict XVI,
not the New York Times and the Guardian.