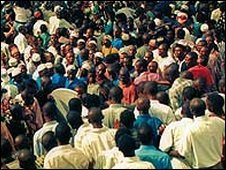 A few interesting figures from the United Nations Population Fund report stand out.

First, Africa has passed the billion mark and is on course for 1.5 billion by 2050. Nigeria and Uganda are growing the fastest. Great work, you might say. At long last, the weight of population will begin to tip the scales of world politics in favour of a continent which has suffered so much. Of course the UNFPA doesn’t see it that way.

“Africa countries are all growing fast… because there is large number of women who have no access to planning their families,” UNPF’s Executive Director Thoraya Obeid told the BBC.

And South Koreans cannot be happy at all with their scorecard. In a race to the bottom, they have the second-lowest birth-rate in the world – 1.22. The lowest is Bosnia and Herzegovina, at 1.21. The world average is 2.54. As we reported earlier this year in MercatorNet, the head of the Korean affiliate of the International Planned Parenthood Federation has pleaded with his countrymen and women to have more children. Korea, said Choi Seon-jeong, has a “national crisis of super-low fertility”.