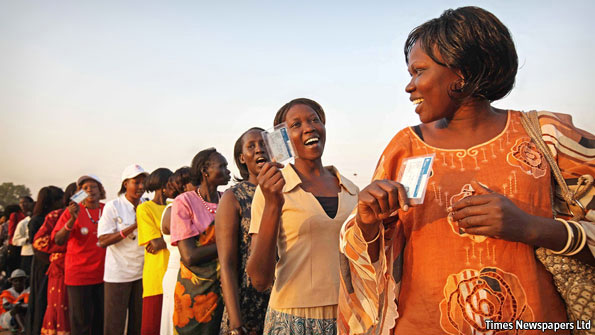 The Economist finally seems to be learning some manners; they have now labeled Africa a hopeful continent. This is elating because only three years ago, they described the entire continent as a hopeless case.  This is the focus of the current edition of the news magazine in a feature story by Oliver August.

This time they took the right first step, because their correspondent took a trip through different cities across Africa. Nothing validates statistics better than the humanity of the people behind the numbers. I suppose not doing so was why they got it wrong the first time, and why many others are still getting it wrong.

For the condescending ‘outsiders’ that often consider Africa (a continent) a country, I could not suppress a chuckle reading the first paragraph:

Three students are hunched over an iPad at a beach café on Senegal’s Cap-Vert peninsula, the westernmost tip of the world’s poorest continent. They are reading online news stories about Moldova, one of Europe’s most miserable countries. One headline reads: “Four drunken soldiers rape woman”. Another says Moldovan men have a 19% chance of dying from excessive drinking and 58% will die from smoking-related diseases. Others deal with sex-trafficking.

The report which says that the next ten years for Africa will be even better adds:

This special report will paint a picture at odds with Western images of Africa. War, famine and dictators have become rarer. People still struggle to make ends meet, just as they do in China and India. They don’t always have enough to eat, they may lack education, they despair at daily injustices and some want to emigrate. But most Africans no longer fear a violent or premature end and can hope to see their children do well. That applies across much of the continent, including the sub-Saharan part, the main focus of this report.

Numbers impress and the report reels out quite a few:

African statistics are often unreliable, but broadly the numbers suggest that human development in sub-Saharan Africa has made huge leaps. Secondary-school enrolment grew by 48% between 2000 and 2008 after many states expanded their education programmes and scrapped school fees. Over the past decade malaria deaths in some of the worst-affected countries have declined by 30% and HIV infections by up to 74%. Life expectancy across Africa has increased by about 10% and child mortality rates in most countries have been falling steeply.

A booming economy has made a big difference. Over the past ten years real income per person has increased by more than 30%, whereas in the previous 20 years it shrank by nearly 10%. Africa is the world’s fastest-growing continent just now. Over the next decade its GDP is expected to rise by an average of 6% a year, not least thanks to foreign direct investment. FDI has gone from $15 billion in 2002 to $37 billion in 2006 and $46 billion in 2012 (see chart).

That the real Africa is much brighter and hopeful than the Africa of the media is something we have always believed and known here, that I often wonder why many still do not want to see.  At least we can tell the likes of The Economist, “You saw it on MercatorNet first”!