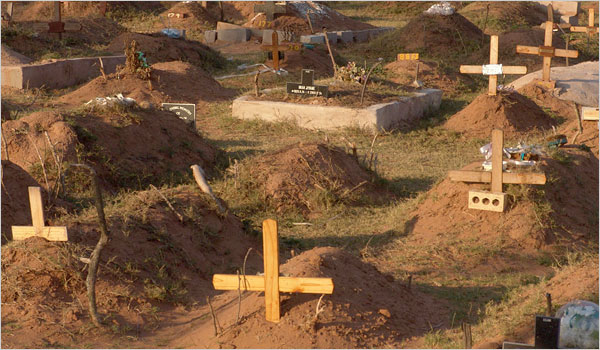 Benedict XVI’s recent comment on the African AIDS crisis — “the scourge cannot be resolved by distributing condoms; quite the contrary, we risk worsening the problem” – provoked an international sensation all out of proportion to its half-sentence length.

“Impeach the Pope!” wrote a Catholic columnist in the Washington Post. This Pope is “a disaster”, a Vatican official told the London Telegraph. These bouquets came from his friends. His foes were sulphurous. “Grievously wrong!” thundered the New York Times. “There is no evidence that condom use is aggravating the epidemic and considerable evidence that condoms, though no panacea, can be helpful in many circumstances.”

No evidence, eh? None at all? Not even just a teensy-weensy bit? Had the Gray Lady and the thousands of other politicians and journalists who rained abuse on the Pope queried any AIDS experts about this? Apparently not. Had they done so, they would have discovered that many African AIDS strategists are having serious misgivings about an obsession with condoms.

In fact, a Harvard expert on AIDS prevention, Dr Edward C. Green, told MercatorNet bluntly: “the Pope is actually correct”. Dr Green is no lightweight in the field of AIDS research. He is the author of five books and over 250 peer-reviewed articles — and, he added, he is an agnostic, not a Catholic.

The not-enough-condoms explanation of the global HIV/AIDS epidemic is driven “not by evidence, but by ideology, stereotypes, and false assumptions,” Dr Green wrote last year in the journal First Things. And myths kill: “they result in efforts that are at best ineffective and at worst harmful, while the AIDS epidemic continues to spread and exact a devastating toll in human lives”.(1)

Dr Green is not a maverick voice. Similar views are being expressed in the world’s leading scientific journals. In an article in The Lancet, for instance, James Shelton, of the US Agency for International Development, stated flatly that one of the ten damaging myths about the fight against AIDS is that condoms are the answer. “Condoms alone have limited impact in generalised epidemics [as in Africa],” Shelton wrote.(2)

As long ago as 2004, an article in the journal Studies in Family Planning conceded that “no clear examples have emerged yet of a country that has turned back a generalized epidemic primarily by means of condom promotion”. In fact, the prevalence of HIV/AIDS can actually rise with increased distribution of condoms. Take Cameroon, for instance, the country to which the Pope was flying when he made his notorious remarks. Between 1992 and 2001 condom sales there increased from 6 million to 15 million — while HIV prevalence tripled, from 3 percent to 9 per cent.(3)

Benedict’s critics blithely assume that the solution is more condoms because AIDS in Soweto is like AIDS in San Francisco. It’s not. In the West, AIDS is confined to high-risk groups, like sex workers, homosexuals, and injecting drug users. Within these groups, studies do show that condoms are effective to some extent. But AIDS in Africa is a generalised, heterosexual epidemic which affects ordinary people.

For years, researchers have desperately sought to understand why AIDS there has been so devastating. Sub-Saharan Africa is most heavily affected region in the world. It accounts for 67 percent of all people living with HIV and for 72 percent of AIDS deaths in 2007.(4) But now the answer is crystal clear. The reason is the widespread practice of “multiple concurrent partnerships”.

What does this mean? In Africa, it is not uncommon for an individual to have more than one long-term partner at a time. In the West, we might use the terms “mistress” or “boyfriend”. Relationships like these are more than just casual hook-ups; to some extent they are based on intimacy, trust and friendship. In these circumstances, it is very difficult to persuade men to use condoms consistently. Concurrency, as the scholars term it, is a deadly recipe.

This is the theme of a highly-praised 2007 book by the medical journalist Helen Epstein, The Invisible Cure: Africa, the West, and the Fight Against AIDS (warmly reviewed by the New York Times, by the way). For a long time she attributed the epidemic to commercial sex, poverty, discrimination against women and low condom use. But after observing that HIV rates were increasing despite higher condom use, she grasped that concurrency is the key to the problem. She describes these multiple long-term partnerships as the “super highway of infections” with casual sex operating as “on ramps”.

“Condoms alone won’t stop the virus, because so much transmission is taking place in longer term relationships in which condoms are seldom used,” she told an interviewer last year. “Therefore, a collective shift in sexual norms, especially partner reduction, is crucial.”(5)

And it turns out that condoms can be worse than just ineffective in a generalised epidemic. Dr Green explained to MercatorNet that they “may even exacerbate HIV infection levels due to a phenomenon called risk compensation, or behavioral disinhibition. People take more sexual risks because they feel safer than is actually justified when using condoms.”

If showering condoms over Africa can’t stop the epidemic, what will? According to a recent article in Science by researchers from the University of California at Berkeley, Harvard, the University of California at San Francisco, and the San Francisco Department of Public Health, only two interventions definitely work: male circumcision and reducing multiple partnerships.(6)

Male circumcision significantly reduces the risk of heterosexual HIV infection and has even been called a “surgical vaccine”. It may explain why HIV rates in West Africa are relatively low. The UN is promoting it vigorously in southern Africa. But the challenge is huge – about 2.5 million circumcisions by the year 2010.

The other effective strategy, say these experts, is “partner reduction”, which — surprise! surprise! — sounds remarkably like what the Pope recommends. In Uganda, HIV prevalence reduced dramatically after an intensive “zero grazing” campaign in the 1990s. A recent decline in Kenya’s HIV rate seems to be due to partner reduction and marital fidelity. Furthermore, despite scepticism by Westerners, it is possible to change sexual behaviour. A 2006 campaign in Swaziland about the danger of having a “secret lover” resulted in fewer partners.

If the standard HIV-prevention toolbox has “failed utterly to reduce HIV transmission”, as Dr Green and other researchers contend in the current issue of Studies in Family Planning (7), how much is being spent on the treatment that works? Very little, complain the authors of the article in Science. The biggest chunk of the US$3.2 billion UNAIDS budget has been allocated to interventions which are “unsupported by rigorous evidence”. Only 20 percent goes to generalised epidemics in Africa and elsewhere, even though these account for two-thirds of all HIV infections. Only 5 percent goes towards male circumcision — and a negligible amount to changing sexual behaviour.

An editorial in the Seattle Times derided Pope Benedict for living in an “alternate universe”.(8) But it isn’t the Pope who has take up residence there. It’s his critics. As Dr Green wrote last year, “Christian churches — indeed, most faith communities — have a comparative advantage in promoting the needed types of behavior change, since these behaviors conform to their moral, ethical, and scriptural teachings. What the churches are inclined to do anyway turns out to be what works best in AIDS prevention.” (9)

(3) Norman Hearts and Sanny Chen. “Condom promotion for AIDS prevention in the developing world: is it working?” Studies in Family Planning. March 2004. pp 39-47.