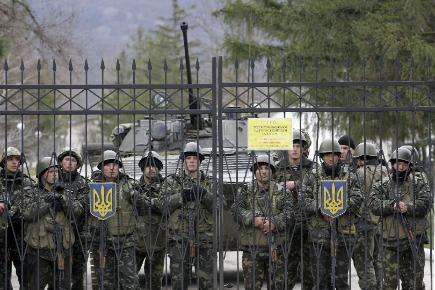 As we watch the unfolding of the Ukraine-Russia standoff, claims of ethnicity are being used as justifications for Russian action. According to Philip Browning, writing in the South China Morning Post, this opens up “a large can of worms with long-term global consequences”.  He argues that the Russian takeover of the Crimea has overturned two pillars of the post-World War Two world order: the permanence of state boundaries protected by the United Nations and “the inadmissibility of ethnicity as the primary identifier of states”.

It is this second pillar that is of interest to us today.  With Russia claiming that it is acting as the defender of Russians, no matter which country they reside in, many countries in Russia’s “near-abroad” will be feeling slightly nervous.  Eastern and Southern Ukraine holds large Russian populations, as do the three small Baltic states (Estonia was warned by Russia in the last few days over its treatment of ethnic Russians), while a quarter of Kazakhstan’s 17 million people are Russian.

However, according to Browning, this is a justification that has a limited shelf life due to demographic trends:

“In the longer run, Russian ambitions are doomed by demography – Russian populations are shrinking while those of Kazakhs, Uzbeks and the like continue to rise. But, meanwhile, Putin has given notice that he can and will use ethnic Russians as levers.”

Does this mean that there will be a sense of urgency in Russia’s moves to protect its fellow Russians abroad?  If there is, the policy is a double-edged sword, as Chechnya’s majority population “would relish freedom from the Russian yoke. The same applies to Dagestan.” In short, if Russia can protect Russians in other sovereign nations, why can’t ethnic groups in parts of the Russian federation break free from Russian control?

What does this all mean for China? As Browning notes, there are large Chinese populations in Southeast Asia that could be used as a pretext for China acting in a similar manner to Russia. He points to the Malaysia Airlines search as an example of China being urged to protect ethnic Chinese, no matter which country they are citizens of:

“The Malaysia Airlines plane saga sparked demands that China take the lead in the search because most of the passengers were Chinese citizens and ethnic Chinese from Malaysia. Judging by some mainland media, Chinese often assume Chinese ethnicity must equate with loyalty to the ‘motherland’, that is, Beijing. Insults hurled at former US ambassador Gary Locke as a ‘banana’ – yellow outside, white inside – show how prevalent racial assumptions are in China.”

If the second pillar of international relations mentioned above has been kicked away, then will China in the future be able to use ethnic Chinese minorities as an excuse to interfere with its neighbours?  Browning warns against any temptation in this direction as China has its own internal ethnic minority areas and problems to deal with: Xinjiang and Tibet.

“…if China is to emphasise ethnic identity as a feature of its identity and diplomacy, it will never solve the problem of its disturbed minority regions, Tibet and Xinjiang. Indeed, as a start, China could stop treating its non-Han inhabitants as, at best, backward tribes.”

There are no “ethnically-pure” countries in the world today. To start interfering with other countries to “protect” your ethnicity is indeed opening a large can of worms. Russia, and to a much lesser extent China, is facing demographic decline in the coming decades. I don’t think an “ethnicity battle” is one that it is destined to win.  However, it does provide a good excuse to extend its zone of influence today.