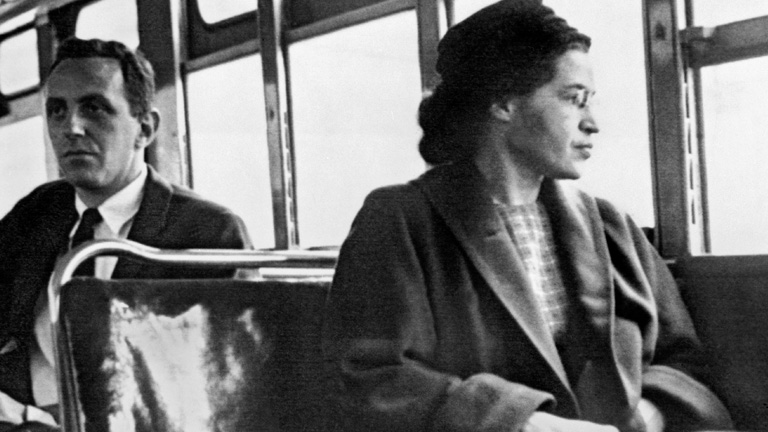 As this is written, it’s still December 1st in the US, the exact date in 1955 ago that Rosa Parks made her quiet but firm stand for justice by refusing to give up her seat on a bus merely because of the color of her skin. And on this date in 2014, racial tensions in the US are inflamed still.

Yes, still, not ‘again.’ I wanted to learn which of the two references applied, so I asked Bishop Lance Davis on radio Monday, a friend and guest of the show who brings depth of experience and insight to conversations about social issues of the day, which it is in the reality of African American communities and individuals. Long story short, it’s ‘still.’ We didn’t get over racism in America, it never went away, it’s been a reality for far too many Americans for far too long, for many reasons. And as terrible as Ferguson has been for months, as exploited as it has been by people and factions for whatever their reasons, it provides an opportunity to face the realities and determine what we will do about them. Together. Because if it’s fractured into actions and reactions by identity groups, we won’t get anywhere to to advance an answer to the problem. We’ll only continue to be part of the problem.

Bishop Davis has been on my radio show to talk about the African American Clergy Coalition working together with Catholic bishops of Illinois to uphold marriage law and “getting our priorities straight”. His main points were outlined simply but clearly: “What really impacts the average black person? Do our priorities line up with that of our elected officials and community leaders?”

He and fellow clergy asked why state leaders were ignoring the most glaring issues their communities faced, most importantly inadequate education, high unemployment, injustices in the penal system, and the politics and political scandals that politicians were so caught up in. They held press conferences last year with the message that “ENOUGH IS ENOUGH!”

They have never let up in their efforts to effect change for inner city schools, state funding to build more schools, allow students books instead of forcing them to leave the book under the desk in each class for the next student, and so on. But they never got the attention they sought from politicians who could make a difference.

Bishop Davis told me about driving his son to college in late summer, crying – not as or why most of us do when driving our child to college, but – because his son made it out of the neighborhood alive, and had that opportunity for a future, which so many young black men did not, for so many reasons.

I venture to say that while we know of gang violence and social breakdown in the inner cities, most whites don’t know this.

As one of the few black male reporters at The [Wall Street] Journal, I’ve had experiences over the years that are unknown among my white colleagues, though anything but unique among other black men. We’ve all had our encounters; we’ve all been in situations where being black becomes synonymous with being suspicious, where demanding rights and respectful treatment can be seen as resisting law enforcement.

How aware are you of the experiences some of your accomplished, talented, intellectual, impressive colleagues or friends in the professional world – who happen to be black – have had to face while growing up and coming of age? Read that whole WSJ article.

As a teenager, I could be a doofus, but I knew even then that my margin for error was nonexistent compared with that of my friends and co-workers. On a perfectly beautiful day, I could be suspicious enough to a police officer that I would end up on the wrong end of a gun barrel.

For many black men in America, that margin of error has not improved. I don’t condone the rioting in Ferguson, but it might help if the rest of the country had some small sense of the frustration and anger that this situation continues to cause.

My friend Tod Worner, who thinks like a brother I didn’t know I had, wrote this. In citing the Rev. Dr. Martin Luther King Jr., and the nature of his protests on behalf of the great Civil Rights Movement, for human dignity and “all God’s children”, a hero truly honest and honorable, who saw justice and injustice through the lens of history and Augustine and Thomas Aquinas, Tod’s post speaks profoundly well to and of the protests still festering in and about Ferguson.

I wrapped up Monday’s show saying there are three options and two are unacceptable. We can’t be complacent, complacency is not an option. We can’t be part of the problem in the many ways that provision is being offered to the American public. So we have to be part of the solution. I pray we each see the way to be that.