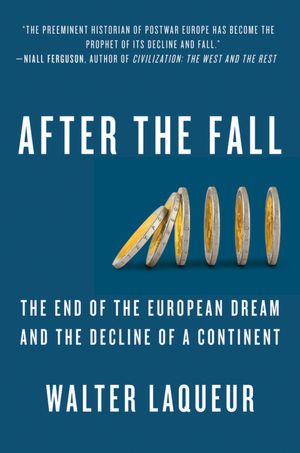 I came across this book review the other day that I thought looked very interesting in the Washington Post. The author, Walter Laqueur, a German-born American historian, has written extensively on modern European history and has now turned his attention to the current European situation in his latest book: After the Fall: The End of the European Dream and the Decline of a Continent. In it, he envisages the imminent decline of Europe into a type of cultural theme park, “a kind of sophisticated Disneyland for well-to-do visitors from China and India.” “The decline of Europe, once the center of the world,” he writes, “can be interpreted above all as a decline of will and dynamism.”

So how has this come about? How did a once world-conquering continent fall from global pre-eminence? After all, as William Drozdi writes in his review:

“Just a few years ago, a spate of books trumpeted the ascendancy of a uniting Europe as the new global superpower that would run the 21st century. Europe’s mastery of soft power seemed destined to eclipse military might in the post-Cold War age. The building of a continent “whole and free” following the collapse of the Soviet empire would finally put an end to ethnic and nationalist conflicts. And the historic creation of the euro, as the coin of the realm in the world’s biggest trading bloc encompassing 500 million prosperous citizens, foreshadowed the demise of the dollar’s supremacy.”

According to Laqueur, the recent success of Europe masked many problems and vulnerabilities in its social, economic and political institutions, which at the crunch proved too fragile to bear the impact of the world’s most severe financial crisis since the Great Depression. Laqueur describes in detail the demographic crisis that lies behind so many of the continent’s problems and that this blog has pointed to over the last year or so. As Drozdi writes:

“He [Laqueur] cites U.N. forecasts showing that, by the year 2050, the whole of Europe, including Russia, will shrink by 130 million people. Decades of low birth rates have resulted in aging populations that have placed a huge strain on pensions and health care largely covered by Europe’s generous social welfare systems. These problems are now affecting many key policies. Indeed, in the current euro crisis, German government officials say their reluctance to bail out Greece, Spain, Italy and Portugal is driven largely by fears among its own taxpayers that the bill will become so onerous as to jeopardize their retirement.”

On the other side of the demographic coin, many parts of Europe have had problems trying to integrate their large immigrant communities, with both radical xenophobes among the native population and radical Islamic and criminal elements among the immigrants causing trouble for European countries. Laqueur cites demographers’ predictions that “major European cities, including Birmingham, Amsterdam, Brussels, Cologne, and Marseilles, will have a non-native majority in the not-too-distant future.” How Europe deals with this changing ethnic, cultural and demographic makeup will be one of the questions that will have to be answered in the Old World over the coming years.

Aside from demography, Laqueur also points to Europe’s inability to compete economically with the cheap-labour super powers of China and India. Aside from a few isolated examples, “Europe has lacked the entrepreneurial spirit to find ways to stay ahead of the rest of the world.”

Are we watching the beginning of the end of a global-influencing Europe? Or did we watch that 70 years ago? Did the golden years of the start of the Euro contain the last, golden, childless hurrah of Europe’s ancien régime? If so, let us hope that the 21st century’s versions of Robespierre, the Directory and the Terror are not around the corner.