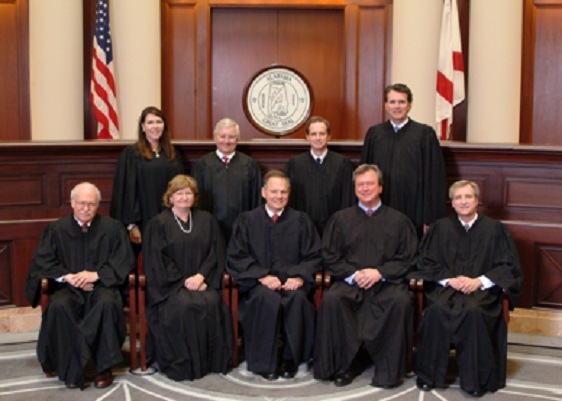 The justices of Alabama’s Supreme Court made a dramatic stand for marriage this week by defying federal court decisions supporting gay marriage in the state. At the same time they delivered a broadside at arguments used by the gay marriage movement and federal courts to overturn state marriage laws.

The decision came after a month of marriage chaos in the state that began with an Alabama district court decision. Judge Callie Granade ruled that the state’s refusal to license and recognise same sex marriages is unconstitutional and ordered Attorney General Luther Strange to stop enforcing the law.

Strange appealed for a stay of the order to a federal district court, which instead argued why it should go ahead, and then to the US Supreme Court, which also allowed the lower court order to proceed. Some counties began issuing the licences, others refused, and some stopped issuing any marriages licenses. On the petition of a probate judge and other parties the Alabama Supreme Court reviewed the federal court’s decision and found that the state had no obligation to comply.

“As it has done for approximately two centuries,” the court said, “Alabama law allows for ‘marriage’ between only one man and one woman.” Alabama judges have a duty “not to issue any marriage license contrary to this law. Nothing in the United States Constitution alters or overrides this duty.”

Like many states, following the federal government’s Defence of Marriage Act in 1996 Alabama amended its constitution to define marriage as “inherently a unique relationship between a man and a woman.” It also states: “As a matter of public policy, this state has a special interest in encouraging, supporting, and protecting this unique relationship in order to promote, among other goals, the stability and welfare of society and its children.” The amendment was approved by 81 percent of voters in a ballot.

Since Section 3 of DOMA, withholding recognition of same-sex married couples as “spouses” for the purposes of federal laws, was struck down by the US Supreme Court in the case US v Windsor in 2013, courts have imposed same-sex marriage on state after state. However, the Alabama justices maintain that the state does not have to accept federal rulings – until the highest court in the land decides the constitutionality of “traditional marriage” laws, as it is expected to do in June.

Here are some excerpts from the decision.

State law is alleged to discriminate against same-sex couples on the basis of gender.

The fact is, however, that traditional-marriage laws do not discriminate based on gender: All men and all women are equally entitled to enter the institution of marriage. Only by redefining the term “marriage” to mean something it is not (and in the process assuming an answer as part of the question), can this statement be challenged. Put in the negative, traditional-marriage laws do not discriminate on the basis of gender because all men and all women are equally restricted to marriage between the opposite sexes.

Marriage as a fundamental right

The US Supreme Court has treated marriage as a fundamental right in several cases, it is true, but:

What the federal district court ignored in these cases, however, is that the Supreme Court plainly was referring to traditional marriage when it proclaimed that marriage is a fundamental right. … This is evident from the fact that in each of those cases the discussion of the right involved children. …

Thus, what the federal district court has done is to declare an entirely new concept of “marriage” a fundamental right under the guise of the previously understood meaning of that institution. …

… Proponents of same-sex marriage repeatedly contend that extending the benefits of marriage to their relationships carries no religious or moral dimension and therefore does not constitute a fundamental shift in the social fabric of America, because marriage, as far as the government is concerned, is simply a civil acknowledgment of a legal bond.

If marriage truly is nothing more than a state-granted legal license, it is difficult to see how it could rise to the status of a fundamental right of such importance that the United States Constitution prohibits states from approving only the historically accepted understanding of the institution.

What is it about marriage that warrants constitutional protection?

Is it age, or consanguinity, or the act of sex itself, or love? The justices find that none of these things measures up to the fundamental characteristic of marriage requiring protection.

Proponents of the new definition of marriage therefore leave us with an untenable contradiction. On the one hand, they insist that expanding the definition of marriage to include relationships between members of the same sex constitutes nothing more than offering marriage licenses to another class of individuals. It is akin to modifying the age of consent for marriage or changing the length of residency required in a state before one can receive a marriage license, changes that are wholly within state government’s power to modify, without altering the nature of marriage.

So it can only be what it has always been

Having discarded other candidates for what aspect of marriage is so fundamental that it warrants constitutional protection, we are left with the characteristic that has remained unchanged throughout history: marriage has always been between members of the opposite sex. The obvious reason for this immutable characteristic is nature. Men and women complement each other biologically and socially. Perhaps even more obvious, the sexual union between men and women (often) produces children. Marriage demonstrably channels the results of sex between members of the opposite sex — procreation — in a socially advantageous manner. It creates the family, the institution that is almost universally acknowledged to be the building block of society at large because it provides the optimum environment for defining the responsibilities of parents and for raising children to become productive members of society. …

In short, government has an obvious interest in offspring and the consequences that flow from the creation of each new generation, which is only naturally possible in the opposite-sex relationship, which is the primary reason marriage between men and women is sanctioned by State law.

On “animus” towards homosexual persons

As we have already seen, the marriage laws undeniably have several purposes that have absolutely nothing to do with attempting to treat a particular group in an unequal fashion. The laws attempt to protect children produced in opposite-sex relationships; they fashion a system for parental legal responsibilities; and they encourage family structure and enable formative education and socialization of children. The limitation of marriage to opposite-sex couples has so long existed in law that ascribing its existence solely to hatred toward homosexuals is simply absurd on its face. … Even Alabama’s marriage amendment, which is of a more recent vintage, “codified a long-existing, widely held social norm already reflected in state law. ‘[M]arriage between a man and a woman,’ as the Court reminded us just last year, ‘had been thought of by most people as essential to the very definition of that term and to its role and function throughout the history of civilization.’ Windsor, 133 S. Ct. at 2689.”

Alabama’s longstanding and continued embrace of traditional marriage is not due to be struck down on an animus rationale.

Several courts that have declared state marriage laws unconstitutional have relied on Windsor’s “equal dignity” language “and yet there is no ‘equal dignity’ provision in the text of the United States Constitution. Instead, what this notion appears to be is a legal proxy for invalidating laws federal judges do not like”. The Alabama justice’s decision finds the basis of this language elusive.

Moreover, because the Windsor Court’s moral judgment is (one must assume) not based on religion, then it must be asked what standard is being used to judge that marriage is better than nonmarriage, that it contains some kind of higher dignity than other relationships? Because the notion is not contained in the Constitution, one may question whether it is nothing more than intuitions. At any rate, it is not a legal basis for striking down a validly enacted law. In the end, however, even if one were to accept that marriage carries with it a “dignity” that compels its availability to all, would we not meet ourselves coming?

Under that construct, such dignity no doubt would be something gained from the very nature of traditional marriage, the foundation for the family unit within which children may be born and have imparted to them by a mother and father the values needed for responsible citizenship and the furtherance of society.

To all of this, proponents of same-sex marriage often retort that there is no reason both the traditional definition and the new definition of marriage cannot coexist. On one level, that argument makes the erroneous assumption that the two definitions are not making different claims as to why marriage exists. On another level, it simply assumes that the definitions are not mutually exclusive.

Redefining marriage by definition implies that the traditional definition is inaccurate. In point of fact, we are concerned here with two different, mutually exclusive definitions. One that marriage is only between a man and a woman, and one that does not include this limitation. Both definitions cannot be true at the same time. Insisting that the law must legitimize one definition necessarily delegitimizes the other.