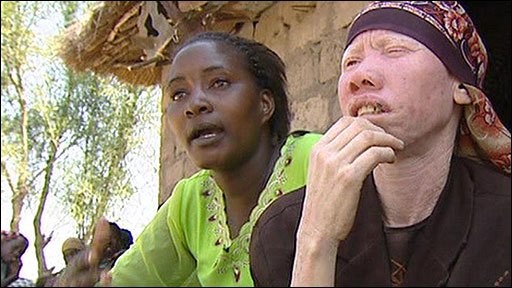 White people no longer stand out, literally, in sub-Saharan Africa, not
even in the villages and urban slums where a NGO Land-cruiser, with its
white crew, is now a familiar sight. For albino Africans it’s a
different story.

The whites are visitors, who are there
usually for a specific purpose and they won’t stay forever. An albino
may not find it easy to move out. He or she was born there and from an
early age is likely to have encountered discrimination and taunts: at
school, at sports and leisure, and later when looking for work.

An
albino child will very likely be rejected by his father. He will accuse
the child’s mother of “infidelity” or tell her that he, the father, is
normal; there must be something wrong with the mother. And so he will
leave her because he doesn’t want “more children like that one”. But
albinos were left to follow their own way, a grim one in a place where
the sun is bright and hot, and shines every day of the year. Despite
popular misconceptions, they are not mentally handicapped. They are
intelligent and smart. They have to be; they are survivors.

That
was until three years ago, when a “trade” in albino body parts started,
especially in the south-west of Lake Victoria, where albinos are about
1 in 4,000 of the population, as opposed to the 1 in 20,000 of Europe
and North America where they are also less noticeable from their
complexion.

An albino’s life is hard. He has little or no
pigmentation in his hair, skin and eyes. Instead of getting a stylish
tan from being out in the sun, he will develop sores on the skin and,
unless very careful and rich enough to use sun block regularly, he will
contract skin cancer at some point in his life and will always have
poor eye-sight.

Now his life is even harder. According to the
International Red Cross/Crescent (ICRC), 10,000 have gone into hiding
since the killings began in Tanzania, which has the highest known
proportion of albinos. In the year to June 2008, 50 were killed in
Tanzania. The authorities reacted. In April 2008, the Tanzanian
president, Jakaya Kikwete, appointed a 48-year old albino, Al-Symaa
Kway-Geer to parliament. Part of her task was to crack down on
witch-doctors who encourage the killing of albinos. In January 2009,
the Prime Minister revoked the licenses of witch-doctors, many of whom
use body parts in black magic.

Why this persecution? The
situation is somewhat like when the first whites entered the African
interior. People believed that they were half-men, half-gods, that they
had some kind of supernatural strength, that they could predict the
future, that they could bring sorrow or wealth and that they had either
good or evil powers. Since they were different, they were kept at a
respectful distance. They were the “pink strangers” carrying sticks
that fired and killed.

The albinos must have “powers” too, but the difference is that they are “us”, born among us.

Their
body parts, particularly those considered the “most powerful”, such as
the head and genitals, are thought to bring good luck and transmit
supernatural powers. Unscrupulous businessmen have smelt money. They
have been known to sell a complete set of body parts for as much as
US$75,000. Illegal miners looking for gems use them; fishermen tie hair
to their nets for good luck in getting a catch. Members of the business
community in Mwanza, on Lake Victoria, have confessed to buying human
body parts from witch-doctors. The word is spreading and traders from
the neighbouring countries of Kenya, Uganda, Burundi and eastern Congo
are cashing in. Some politicians also regularly consult witch-doctors.

In
Tanzania they have been trading in albino organs; in Uganda small
children are used by witch-doctors as human sacrifices. A Witchcraft
Act has been in force in Uganda since 1931, but it has not been
implemented effectively, since some top business people and a few
politicians take part in these practices to get rich and further their
careers.

The law in Tanzania has been slow to act but something
is happening now. As of December 1, seven people had been sentenced to
death — although the death sentence has not been actually implemented
in the country since 1995.

In Burundi, albinos have become
proactive. They are demanding a census, as well as their own Member of
Parliament. In the Ruyigi region of the country, a safe haven has been
set up for them by Nicodeme Gahimbare, in his fortified house. Good as
this initiative is, a more lasting solution is called for.

Mali,
in north-west Africa, and Malawi in the south-east, however, each has
albinos who have become popular musicians — Salif Keita from Mali and
Geoffrey Zigoma from Malawi. Social acceptance has proved to be
possible.

All this fear and loathing is one of the paradoxes of
Africa in transition. On the one hand there are the internet and mobile
phone. On there other there are dark superstitions to conjure success
at any price. Western countries, of course, are no strangers to such
paradoxes. For all their sophistication, they still believe that
killing children in the womb will bring relief to broken lives. The
temptation to dehumanise people who don’t look like us is universal.