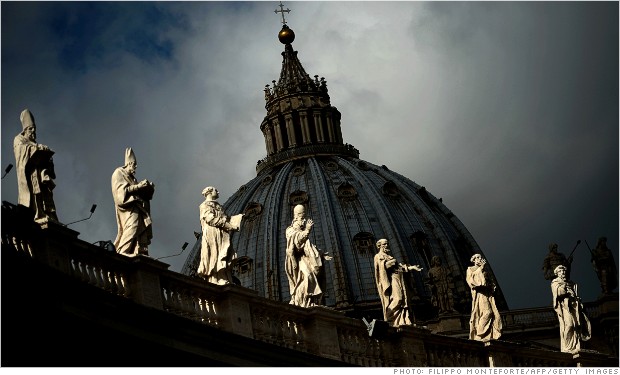 The UN watchdog on children’s rights which recently hauled the Vatican over the coals for its handling of sex abuse has today released its recommendations. The report is not only ignorant and misguided, peddling myths for which there is no foundation, but betrays an extraordinary misunderstanding of the nature of the Church and the Holy See, while seeking to impose an ideology of gender and sexuality in violation of the UN’s own commitment to religious freedom.

Although the Holy See has responded diplomatically to the report (see below), promising to look at the recommendations, the Secretariat of State cannot possibly accept them without doing violation to the nature of the Church. By adopting the mythical framework peddled by victims’ advocacy groups and lawyers, and ignoring the evidence put to it by the Holy See on 16 January (see CV Comment here, and Archbishop Tomasi’s speech here), the Committee has shown itself to be a kangaroo court. The Holy See can only now consider withdrawing its signature to the Convention. The Committee has very seriously undermined both its own credibility and that of the UN as a whole.

The 16-page UN report is so full of crass errors and myths that it is impossible to tackle them all. But the principal faults can be gathered under the three headings of 1) ignorance about the Church’s record on abuse 2) misunderstanding about the Church 3) attempt to impose an ideology of sexuality and gender.

1) Ignorance of the Church’s record of abuse

Nowhere is the Report is there an acknowledgement that the Catholic Church in the western world has led safeguarding, creating guidelines and best practices which are routinely recommended by governments to other institutions to emulate. Nor does it acknowledge that the Holy See at least since 2001 has been the catalyst of those best practices, cajoling bishops’ conferences across the world to put in place measures of the sort pioneered in the US and the UK. Instead, the Report peddles the myth (29) that “the Holy See has consistently placed the preservation of the reputation of the Church and the protection of the perpetrators above children’s best interests”. If there is substance to that claim pre-2000, the opposite is now the case, and nowhere is this acknowledged. This, no doubt, was designed to produce headlines like the BBC’s — ‘UN slams Vatican for protecting priests over child abuse’ — in order to sustain the myth of the Church, and the Vatican in particular, as an unreformed institution, when all the evidence points the other way.

In order to sustain that myth, the Report calls for the Vatican, for example, to inculcate the notion that the best interests of children are paramount, when this has been a central tenet of the Holy See’s efforts for at least the past decade. It claims (43-44) that “well-known child sex abusers have been transferred from parish to parish” when this was true of the 1970s-80s but hardly ever at all from the early 1990s, when the bishops began seriously to tackle the problem.

It claims, too, that the Holy See “has established its full jurisdiction over child sex abuse cases in 1962″ when that was true only of one form of canonical crime (solicitation in a confessional) which did not exist in civil law at the time. It claims that sex abuse cases were placed from 2001 “under the exclusive competence of the Congregation for the Doctrine of the Faith”, implying that local bishops had no role in the matter. In fact, the CDF’s measures were to ensure that action was taken by local bishops in civil law and to speed up canonical measures such as laicization; it in no way usurped the role of bishops.

The Report is in deep confusion about canon and civil law, claiming, for example, that child sex abuse has been dealt with in “confidential proceedings providing for disciplinary measures which have allowed the vast majority of abusers … to escape judicial proceedings in states where abuses were committed.” This is an outrageous untruth. The Holy See’s procedures — bound by confidentiality to enable victims to give evidence — refer to canonical processes such as laicization; they do not contradict, interfere with, or prevent in any way action under the civil law of states, and in general demand that the civil law process of states is completed before canonical processes begin. Back when abuse cases were not dealt with, they were not dealt with in either canon or civil law; and once they were dealt with, they were dealt with in both. There is simply no evidence that canonical trials of sex abusers have ever been used instead of, or to subvert, the actions of police and courts in any country in the world.

The Report then falls into a state of total confusion when it claims that there was a “code of silence imposed on all members of clergy under penalty of excommunication” as a result of which “cases of child sexual abuse have hardly ever been reported to the law enforcement authorities in the countries where such crimes occurred.” This is breathtakingly false. How to explain the dozens of clergy in prison, or the millions and millions paid out in compensation to victims following convictions? A quick glance at a recent safeguarding report in the US blows apart that astonishing affirmation.

In (44d), the Report calls for the Holy See to “amend Canon Law in order for child sexual abuse to be considered as crimes and not as ‘delicts’”. But as anyone with any Latin knows, a delict is a crime. And a canonical crime is as much as crime as a civil crime, even if the types of crime and punishment differ. In (44e) the Report calls for “clear rules, mechanisms and procedures for the mandatory reporting of all suspected cases of abuse” but these have long been in place in the Church guidelines in most countries — unlike institutions such as BBC — and the Holy See has been active in encouraging this to be part of all bishops’ guidelines.

There are countless other examples.

The Report’s authors appear to have grossly misunderstood the peculiar characteristics of the Church, not just as a religious institution but as an juridical entity. Throughout the Report, the Holy See is spoken of as it were the command and control centre of an army, or the HQ of a multinational. In (17.), for example, the Report says the Holy See should track spending on children in Catholic institutions worldwide, and in (20.) says the Vatican should create an international monitoring body to be made accessible to all children in all Catholic schools — which would be a remarkable feat for a Church with over a billion members and hundreds of thousands of educational institutions. Equally absurd is the idea that the Holy See should “provide systematic training on the provisions of the Convention to all members of the clergy”, as if the Vatican were some kind of centralized training body. In (44h) it suggests the Holy See develop “educational preventive programmes” in Catholic schools, as if the Vatican controlled the curricula of Catholic schools.

The Report also treats the Church as a kind of NGO — precisely the opposite of what Pope Francis has insisted it is  – when it calls for it (45a) to combat domestic and gender-based violence. It doesn’t suggest how — through a poster campaign? Tweets? — but any ignores the fact that any such campaigns are led by local bishops, not the Vatican.

And how on earth could the Holy See “properly investigate all allegations of children and adolescents being separated from their families by means of psychological manipulation”?

3) Attempt to impose an ideology of gender and sexuality

With breathtaking arrogance, the UN Report tries to change church teaching to bring it line with gender ideologies. In (25) and (26) it peddles the secularist myth that the Church’s teaching that sex is ordained by God for the possibility of procreation within marriage encourages homophobia, and patronisingly suggests that the Holy See condemn all forms of discrimination against gay people — which it does and has done for decades.

The Committee then criticizes contemporary Catholic teaching on sexuality, regretting how “the Holy See continues to place emphasis on the promotion of complementarity and equality in dignity, two concepts which differ from equality in law and practice provided for in Article 2 of the Convention.” In other words, where the Catechism of the Catholic Church fails to comply with the ideology of gender, it must be amended.

Amazingly, the Report also calls (36.) on the Holy See to provide  – to whom, it does not say; perhaps via a helpline manned by monsignors? — what it calls “family planning, reproductive health and adequate counselling” to prevent “unplanned pregnancies.” Where this is going becomes clear in (55.), where the Holy See is told to change its teaching on abortion and even to amend canon law “with a view to identifying circumstances under which access to abortion services can be permitted.”

Lastly, the Report even lectures the Holy See on how it should interpret Scripture. In (39d) the Holy See is told to “ensure that an interpretation of Scripture as not condoning corporal punishment is reflected in Church teaching”.

Austen Ivereigh is coordinator and co-founder of Catholic Voices in the UK. This article first appeared on its website.

STATEMENT BY THE HOLY SEE

According to the proper procedures forseen for the parties to the Convention, the Holy See takes note of the Concluding Observations on its Reports, which will be submitted to a thorough study and examination, in full respect of the Convention in the different areas presented by the Committee according to international law and practice, as well as taking into consideration the public interactive debate with the Committee, held on 16 January 2014.

The Holy See does, however, regret to see in some points of the Concluding Observations an attempt to interfere with Catholic Church teaching on the dignity of human person and in the exercise of religious freedom.

The Holy See reiterates its commitment to defending and protecting the rights of the child, in line with the principles promoted by the Convention on the Rights of the Child and according to the moral and religious values offered by Catholic doctrine.