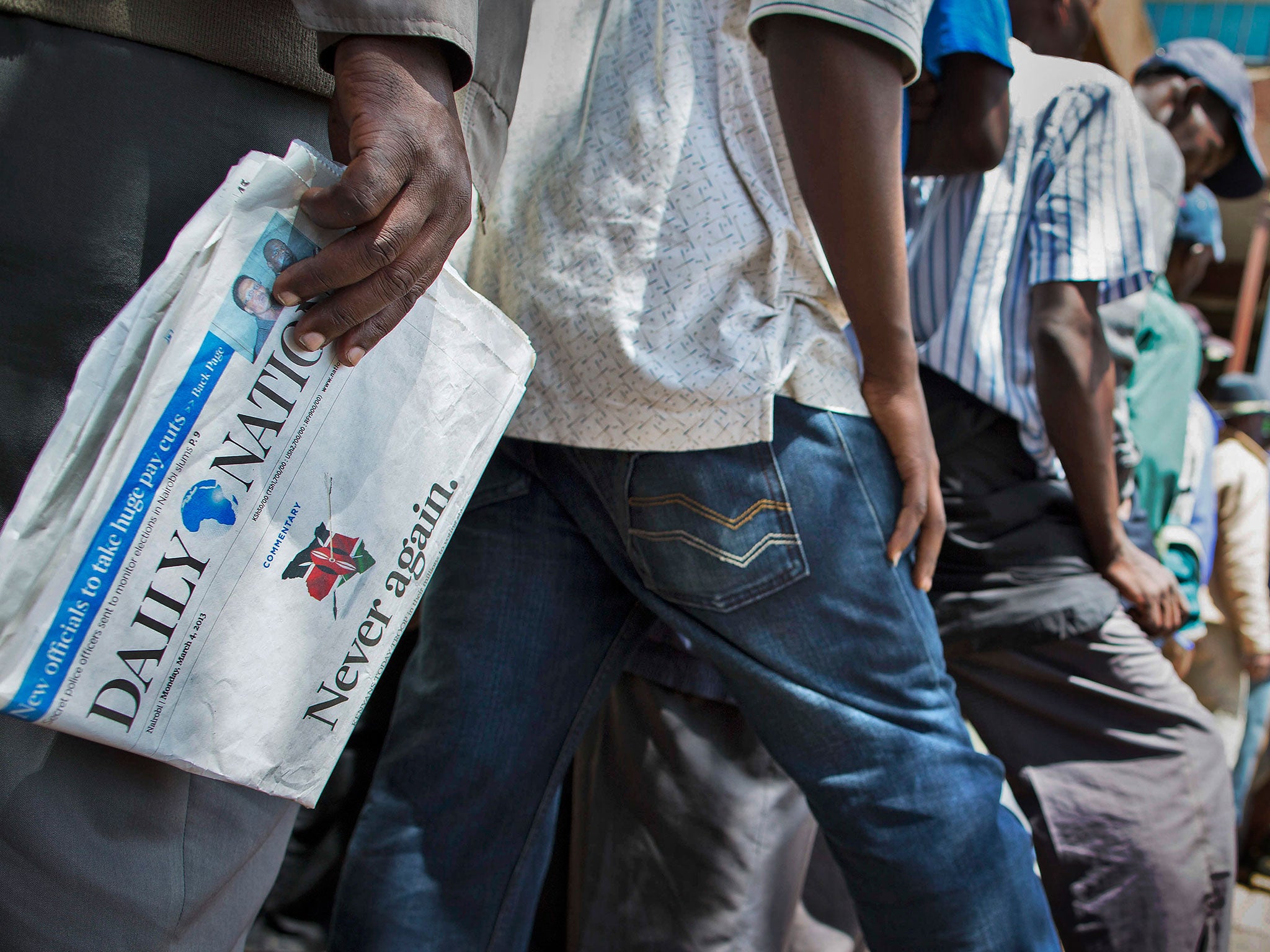 The headline ‘Never again’ refers to violence surrounding the 2013 election in Kenya.
The Daily Nation was credited with helping the movement that returned multiparty
democracy to Kenya. Has it changed its mind about democracy?
Photo: AP via The Independent

Racist. Xenophobic. Intolerant. Bigot. Sexist. Ignorant. Cavalier. Unfit. These choice terms have recently been joined by “President-elect of the United States” in describing Donald Trump, the man at the center of the most shocking electoral victory in the history of the United States. The shock of his election three weeks ago is yet to wear off for most media houses and their pundits, whose coverage of the man is still heavily seasoned with skepticism if not ridicule.

Their biased coverage makes for some very musty reading. And a lot of reading it has been. Entire home-pages of some online news sites still have Trump’s name in literally all headlines. Comedians, likewise, have been on a roll. The US-based South African comedian Trevor Noah even had the cheek to compare Trump to his country’s president, Jacob Zuma, and sound off on the possibilities of an American version of an African dictator. I hope his tongue was very firmly in cheek, for such a comparison is sure to be riddled with inaccuracies.

Noah is not the only African who thinks Americans have jeopardized their democracy by electing a man who was clearly the worst possible choice. Across Africa, the idea that Americans actually are not much better than the rest of us has gained currency. According to many, America now lacks the moral high ground to educate Africans on the merits of democracy. Stated more clearly, if America can elect an obviously flawed candidate, what business has it in trying to build “leadership and democracy in Africa?”

But this is a hard argument to substantiate, and it is not helped by the sanctimonious manner in which it has been made. First, even African media houses have been biased about this election from the beginning. For instance, Kenya’s Daily Nation, the country’s largest newspaper, at the tail end of a period of overwhelmingly positive coverage of Clinton, announced Trump’s election with the headline “America does the unthinkable!” The subtitle was even more dramatic. Waxing lyrical about Hillary’s experience and implicitly (and ignorantly) blaming her loss on her gender, the Nation roundly insulted Trump as an “showman with the morals of an alley cat.”

Having been fed on this kind of vitriol, it is not surprising that the opinions of ordinary Africans should be so extreme. But that does not make this opinion correct. What many do not realise is that nowhere is it mentioned that the merits of a democracy are not to be found in the quality of candidates electors have to choose from – although this would be a really welcome bonus – but rather in the free exercise of that choice. And on this count the Americans are aeons ahead of most Africans.

While the naysayers were busy criticising America’s democratic credentials, they forgot that Trump was actually elected by the American people, without a single contravention of the rules of their democracy. Unlike in most of Africa, the system worked, from the first ballot to the last one. Unlike in most of Africa, Americans could follow the process as it went along, without any grounds to fear that the vote would be manipulated beyond the ballot box. And, unlike in most of Africa, the exercise was unhindered by the attempts of the incumbent to overstay his term. This is something very few Africans can hope for, let alone boast of. And that is without saying that African countries do not exactly field the most virtuous presidential candidates.

Despite some vociferous street protests, a peaceful transition is now underway in America. Few African countries have a tradition of peaceful transitions. However radical the result may have been, Americans exercised their rights. The implications of this may be mind-boggling for those convinced that Trump was a terrible choice. But it is precisely for this reason that this election does not herald the fall of American democracy; rather, it is one of the clearest manifestations of its effectiveness. The will of the people, from whom the sovereignty of a state ultimately derives, won out in the end. If this indicates a loss of moral high ground, Africa never had the high ground to call it in the first place.

The choice a country makes as to who will be its leader and primary representative certainly reflects the undercurrents at play in that country, but condemning the system that enables the making of this choice is at best naive and, at worst, stupid. Subsequently using this erroneous conclusion to dismiss the example the system provides is infantile and ill-informed. In the last analysis, American democracy remains robust and healthy. The example it provides for African states could not be plainer.