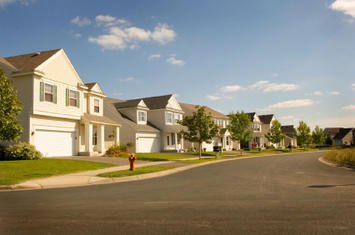 There is a tension between those who would like to see greater population density in cities (largely for environmental, transport and economic reasons), and those who defend the right to a backyard and a plot of land well separate from the neighbours.  In big cities such as Auckland, the Council is forging ahead with controversial plans to increase the population density of the traditionally spacious suburbs and putting limits on how far the city can sprawl outside it’s current boundaries.  New Zealand is a country where families have been lucky enough to traditionally enjoy a backyard and most still cling to this ideal – some even refusing to consider children before they are financially able to obtain it.  Rising land prices are likely contributing to decreasing fertility rates.

Apparently Americans feel the same. Recent data shows that metropolitan American has gone from 82% to 86% suburban since 1990.  In fact, the major metropolitan areas of the United States experienced virtually all of their overall growth in suburban and exurban areas between 2000 and 2010 – a finding that is somewhat surprising to some.  The table below shows the highest and lowest growth by city.

A recent essay in The Economist observes that more and more of us are living in the suburbs, not only in America, but worldwide:

More than half of Americans now live in suburbs, and many of them do so by choice. The world as a whole is quickly following suit. In the 1950s Taiwanese planners toured Britain’s garden cities and returned to build some of their own. Orange County, north of Beijing, is a clone of the California suburb it is named after, even down to the kidney-shaped swimming pools. In much of the world people born in cities, or who came to cities young, are moving out, and incomers from the country do not manage, or aspire, to live right in the centre of their chosen city. Even as their populations grow, the density of metropolitan areas is dropping all around the developing world.

The suburbs are normally about enjoying family and a sense of quietness.  Interestingly, it comments on the history of the suburbs:

Suburbs are curious places, neither here nor there. They have been around since ancient Rome (which gave the world the word), but it was not until the 19th and 20th centuries that first the train and then the bus and car brought them truly into their own—the first places in human history where many people lived but far fewer worked.

It is positive, I think, for our children and families that worldwide we value ‘a home in the suburbs’ and space to enjoy our families.  Although of course it is not possible for all families to afford this in many cities around the world.  Where it is too expensive for families to live on much of their own land, it is positive that local body authorities are increasingly taking children into account, and considering family events, playgrounds and spaces in their recreational planning for the central city.