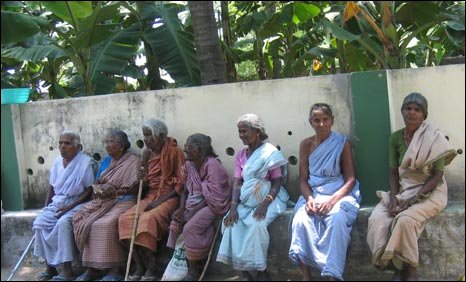 Today I want to share with you a very interesting piece written by Dr Pascoal Carvalho for the FIAMC (the World Federation of the Catholic Medical Associations) about the plight of the elderly, particularly in India. I will leave Dr Carvalho to speak for himself, and will confine myself to highlighting in bold the parts of the article which particularly resonated with or interested me. Enjoy!

“In our society there is a tyrannical dominance of an economic logic that excludes and at times kills, and of which nowadays we find many victims, starting with the elderly.” These were the words of Pope Francis in his message to the members of the Pontifical Academy for Life (PAV), which is currently holding its plenary assembly on the theme of “Aging and Disability”. “Health is without doubt an important value,” the Holy Father continued, “but it does not determine the value of a person. Furthermore, health is not by itself a guarantee of happiness, which may indeed be experienced even by those in a precarious state of health.”

The aim of the four-day gathering, hosted this year at the Augustinianum Institute in Rome, is to explore the role of the Church in helping men and women confront the mental and physical challenges that come with age. A gloomy picture is traced of India, which has the second highest number of elderly in the world. The traditional extended family is becoming less common, and “grandparents” are often left on their own.

By 2021 India could have 140 million elderly, but not the ability (or willingness) to take care of them. The warning comes from the Pontifical Academy for Life (PAV), at the conclusion of their plenary assembly on “Ageing and Disability” (20-21 February), held at Rome’s Augustinian Patristic Institute. Currently, India has the second largest elderly population in the world [(Chronicle Pharmabiz Oct 18/12). The size of elderly population has risen from 12.1 million in 1901 to 77 million in 2001. It is predicted the number will grow 140 million in 2021. India’s demographic structure is expected to shift dramatically from ‘a young to an aging population’ resulting in 316 million elderly persons by 2050. The change, however, is not just a question of numbers. Indian society is progressively abandoning the traditional “extended family” – where the adult children cared for (even though they live together) all the elders of the house – while so-called “nuclear families” are proliferating. The elderly often find themselves alone, with no one to care for them, and without help from the state. This is confirmed by the Global Age Watch Index (Gawi), which ranks 91 countries (from best to worst) according to the conditions of life of the elderly. India is 73rd.

The government ignores the rights and needs of the elderly. Regrettably, the Interim Budget for 2014-15 has ignored the rights of the elderly and deprived people. Far from being pro-people, the budget has clearly exposed its bias towards the rich and privileged by undertaking fiscal consolidation at the cost of high priority development expenditure aimed at reaching out to the most vulnerable sections of the population. In India around 32 per cent of elderly males and 72 per cent of elderly women being dependent on others for sustenance, and it is fundamental that the government universalise old age pension entitlements and improve the pension amounts so the elderly, women and people living with disability can live with a modicum of dignity and self-respect.

The Catholic Church of India, through its Healthcare Apostolate tirelessly serves the aging and elderly and destitute, without discrimination, through our healthcare infrastructure, often located in very remote unreachable areas of our country, touching their lives of millions of elderly with compassion and committed care. Moreover, Pope Francis, at various times, in this first year of his Pontificate, stressed the need to respect and take care of the elderly, saying a society that didn’t do this had no future. Preaching at his morning Mass in the Santa Marta, the Pope had on an early occasion said it was “unfortunately that we live in a time where the elderly are not valued and are put to one side because they are considered a nuisance.”

The Pontifical Academy for Life is celebrating its 20th Anniversary, was established in 1994 by Blessed  John Paul II to be a kind of institute for studying the fields of  biology, medicine and ethical issues.