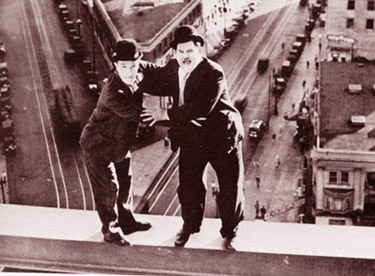 One can only hear the words of Oliver Hardy to poor old Stan Laurel when we read a story like the one reported in the London Telegraph on January 9 last. Courts and judges are not only having to turn themselves upside down but also inside out to deal with the madness they are now being confronted with – and they are doing it all with a straight face. How long more can it last?

Two “divorcing” gay men are arguing with each other before a Canadian court, the one denying the “rights” of another because the jurisdiction in which they first registered their civil partnership does not recognise it as a “marriage” while the jurisdiction in which they now live does. With a straight face – although we have no photographs to prove it, – the Canadian judge ruled that it would be “impermissible discrimination” not to view Wayne Hincks, 44, from London, as married to his partner Gerardo Gallardo in exactly the same way as a husband and wife.

Yes, she did say “exactly the same way” – and claimed that the distinction in UK law between civil partnerships and marriage “violates human dignity”.

John Bingham in the Telegraph notes that this is the first time that a civil partnership ceremony which took place in Britain, in which same-sex marriage is currently illegal, has been officially treated as a wedding overseas. A reverse version of this case is currently in and out of the Irish courts where two lesbians are challenging Irish law to have their Canadian “marriage” recognised in that jurisdiction.

Mr Hincks and Mr Gallardo registered a civil partnership ceremony at Hackney Town Hall in London in 2009 – treating themselves and their friends to all the trappings of a wedding ceremony. They lived together in London before moving to Toronto. However, Canada did not do much for their relationship and they broke up soon after the move. Then things got nasty. Mr Hincks, who sought the divorce, found himself without any right to a share in what he thought was their joint property, business and even their joint bank account, and started  a two-year legal battle which has now ended with this judgement. Mr Gallardo ‘s case was that they were not legally married in the country and that, because their union formed in another jurisdiction was not a “marriage”, normal Canadian arrangements for divorcing couples did not apply.

Now the landmark ruling from the Ontario Supreme Court has changed all that. Justice Ruth Mesbur has ruled that they were married irrespective of the law in Britain. She said,

It seems to me that to do anything other than recognise this particular civil partnership as a marriage would run contrary to the express values of Canadian society … and would constitute impermissible discrimination.

In an impenetrable comment on the case, Miles Geffin, Legal Director in the Family Department at Mishcon de Reya, who supported Mt Hincks, said:

I think the judgment brings into focus the redundant nature of the debate that is taking place in the UK on whether we should open marriage to same sex couples…. That is not to say the debate is meaningless but the question is why are we having to have this debate in circumstances where we view ourselves as a liberal democracy but where we are not taking the lead on something as fundamental as gay rights in equality.