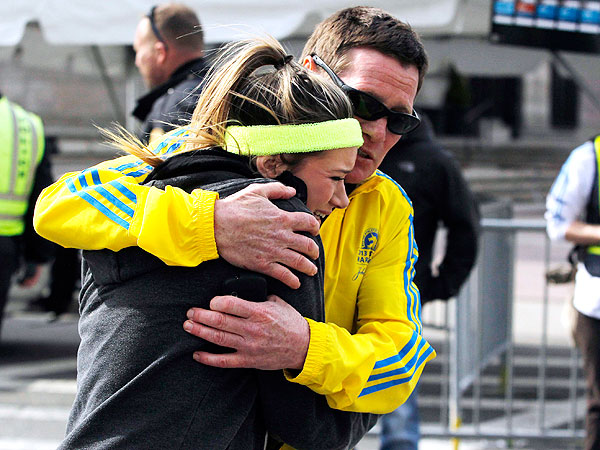 Acts of violence never make sense, no matter how this one turns out to be explained. Every one of these random attacks assaults our sensibilities and rattles whatever semblence of security we still have in our daily lives. We can’t live in fear, so soon after these things happen, we go back to busy life as usual. But with a little more dis-ease. What else can we do?

Among my first thoughts is that we compartmentalize violence. What I was going to blog on today first is the ongoing trial of abortionist Kermit Gosnell, and I’ll get to that, because it’s major news and the media finally realized that (because they were forced to…more on that to come). What has that to do with Monday’s bombs in Boston?

Answer a question with a question: How do we view humanity? Last week was the 50th anniversary of Pope John XXIII’s encyclical Pacem in Terris, Peace on Earth. It talks about order in the universe, order in human beings, rights, duties, responsibilities, truth, justice, charity and freedom. And God.

Pope Benedict often warned societies today that we are living ‘as if God did not exist.’ There are consequences to that, whether individuals believe in God or not. In the absence of a moral code, whose values are any better for people in communities and socieities than any others?

Pacem in Terris says the foundation for order in society…

…is truth, and it must be brought into effect by justice. It needs to be animated and perfected by men’s love for one another, and, while preserving freedom intact, it must make for an equilibrium in society which is increasingly more human in character.

Love for one another? How are we doing with that? A society that’s increasingly more human in character?

But such an order—universal, absolute and immutable in its principles—finds its source in the true, personal and transcendent God. He is the first truth, the sovereign good, and as such the deepest source from which human society, if it is to be properly constituted, creative, and worthy of man’s dignity, draws its genuine vitality…This is what St. Thomas means when he says: “Human reason is the standard which measures the degree of goodness of the human will, and as such it derives from the eternal law, which is divine reason . . . Hence it is clear that the goodness of the human will depends much more on the eternal law than on human reason.”

How much less does the global community depend on “the eternal law” and more so on reason informed by one’s own lights?

Anyway, this is also the anniversary of the Rev. Dr. Martin Luther King Jr.’s  ‘Letter from Birmingham Jail’, which also quoted  Thomas Aquinas.

What does this have to do with the violence in Boston? Probably the disregard for the life of human beings, even children, women, the elderly, anybody in the area of the bombs. Anybody who is the ‘Other’ from whoever set the bombs to kill and maim.

At Massachusetts General Hospital, Alisdair Conn, chief of emergency services, said: “This is something I’ve never seen in my 25 years here … this amount of carnage in the civilian population. This is what we expect from war.”

Conversely, Monday was also the 101st anniversary of the sinking of the Titanic. How is that related? Catholic priest Fr. Thomas Byles was on board and offered the chance to escape on one of the lifeboats several times. He refused, determined to stay on deck to administer last rites to the doomed passengers, assuring his own fate to go down with them.

Terrible things happen. We can’t live in fear. When it’s an act of terror, that’s just what attackers target and how they succeed. I read several news stories on the AP, Reuters, CNN, like this one in the WSJ that talked about the elaborate increased security plan the federal government swiftly put in place after the bombings in Boston. Airspace was shut down over key areas, the security perimeter around the White House was widened and tightened, people were urged to stay in their Boston homes and hotels and colleges in the immediate vicinity cancelled classes for at least 24 hours, and of course that’s understandable.

As the details about the bombings in Boston unfold, it’d be easy to be scared. It’d be easy to feel powerless and demand that our elected leaders do something — anything — to keep us safe.

It’d be easy, but it’d be wrong. We need to be angry and empathize with the victims without being scared. Our fears would play right into the perpetrators’ hands — and magnify the power of their victory for whichever goals whatever group behind this, still to be uncovered, has. We don’t have to be scared, and we’re not powerless. We actually have all the power here, and there’s one thing we can do to render terrorism ineffective: Refuse to be terrorized.

It’s hard to do, because terrorism is designed precisely to scare people — far out of proportion to its actual danger. A huge amount of research on fear and the brain teaches us that we exaggerate threats that are rare, spectacular, immediate, random — in this case involving an innocent child — senseless, horrific and graphic. Terrorism pushes all of our fear buttons, really hard, and we overreact.

But our brains are fooling us. Even though this will be in the news for weeks, we should recognize this for what it is: a rare event. That’s the very definition of news: something that is unusual — in this case, something that almost never happens.

“Don’t be afraid.” It’s a message repeated throughout the Bible, and even before Jesus Christ repeated it often. Those were the first words of Pope John Paul II when he emerged after election by the college of cardinals to a world that didn’t know him. It’s spoken often by loving clergy and lay ministers and kindly village elders and family members and friends, to calm and to soothe. No one can take from you your peace. But you first must have it.

Pacem in Terris. Peace in the world starts with peace in your own heart.