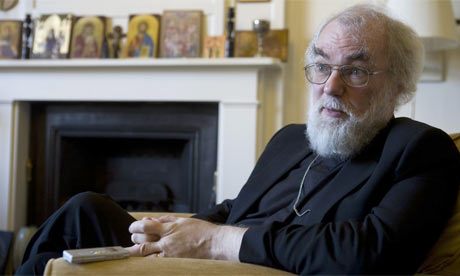 The Archbishop of Canterbury, Dr. Rowan Williams, has created further problems for the British Prime Minister, David Cameron, by stating his unequivocal opposition to the Government’s proposals to legislate for gay marriage. In a major address yesterday to the World Council of Churches in Geneva, Dr. Williams said a new marriage law for gay couples would amount to forcing unwanted change on the rest of the nation. The law has no right, he declared, to legalise same-sex marriage.

Dr. Williams, head of the world-wide Anglican Church, was addressing the Council on the subject of human rights and religious freedom and while acknowledging the enormous progress which had been made in the area of establishing human rights principles there were challenges which were posed by the evolution of the language and ideology of human rights. There were aspects of this development which clearly caused him concern.

“For some,” he said, “it can reinforce the notion that this language is an ideological tool for one culture to use against another.  We have heard over a good many years arguments about the ‘inappropriateness’ of human rights language in a context, say, of mass economic privation, where it is claimed that a focus on individual rights is a luxury, at least during the period when economic injustices are being rectified.  Both the old Soviet bloc and a number of regimes in developing nations have at times advanced this defence against accusations of overriding individual rights.  But more recently, questions about human rights have begun to give anxiety to some religious communities who feel that alien cultural standards are somehow being imposed – particularly in regard to inherited views of marriage and family.  And so we face the worrying prospect of a gap opening up between a discourse of rights increasingly conceived as a universal legal ‘code’ and the specific moral and religious intuitions of actual diverse communities.” Read his address here.

With this address Dr. Williams has now put his weight behind other leading clergy and in particular his own predecessor in Lambeth Palace, Lord Carey, who told the London Daily Mail last week that same-sex marriage laws would be ‘one of the  greatest political power grabs in history’.

Dr Williams’s statement means the Prime Minister now knows he will face opposition from the liberal-minded leadership of the Church of England – as well as its determined traditionalists – if he continues on the track towards legalised gay marriage, the Daily Mail stated today in its report on the Geneva address.  The Archbishop said human rights law ‘falls short of a legal charter to promote change in institutions’.

Dr Williams added: ‘If it is said that a failure to legalise assisted suicide – or same-sex marriage – perpetuates stigma or marginalisation for some people, the reply must be, I believe, that issues like stigma and marginalisation have to be addressed at the level of culture rather than law.’

He added human rights language could be ‘confused and artificial’ when it strayed from protecting the vulnerable. It could become ‘an alien culture, pressing the imperatives of universal equality over all local custom and affinity’.