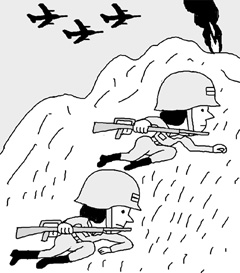 From 2011 South Korea may start recruiting women volunteers for its Army to make up for its growing shortage of young men. Military planners foresee that troop strength will shrink from 650,000 to 510,000 in 2020. One way to make up the shortfall is to allow women to serve as rank-and-file soldiers. Currently female commissioned and non-commissioned officers make up 3% of the nation’s total military forces. By 2020, they will be 5.6%. According to the National Statistical Office, the number of 20-year-old Korean men will begin to decline rapidly after hitting a peak at 360,000 in 2014 and will drop below 250,000 by 2023.

Despite the alarming projected shortage, it is far from certain that the plan will be implemented, as the very idea is likely to provoke heated debate, according to the Chosun Ilbo. ~ Chosun Ilbo, Dec 3