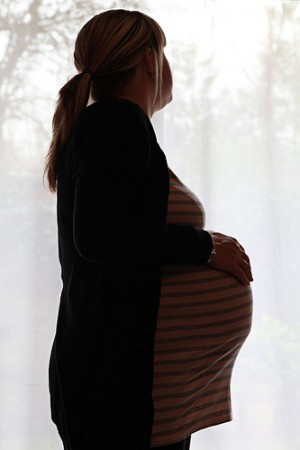 We tend to forget that carrying a crisis or difficult pregnancy to term is the other choice.

This Chicago area woman has a remarkable story, by virtue of doing what she deeply held to be what’s right and natural to a mother’s instincts.

Despite the devastatingly low probability of survival, the single Marengo mother-to-be said that, for her, there was just no other option.

Joined at the heart, her daughters — whom she’s already named Hope and Faith — should be given a chance to live, Amanda said, no matter how long those lives may be.

Strong in her Catholic religious beliefs, Amanda said she loves her children unconditionally and cannot interfere with God’s will.

“He has a plan for me, and for them,” she said. “We never know when our last day will be. We have to enjoy it, and appreciate health while we have it.”

Amanda has created a blog about her experiences at amanda-faithhopelove.blogspot.com, which tells the story of her journey throughout the pregnancy. On the main page is the poignant poem she penned, “I Love You.”

“No matter what happens, my soul will never leave you; If difficulties come here, I will never disappear,” the poem begins.

“I’m sure you would be proud to call me momma,” she writes, “for you are a special gift to me.”

Amazing grace, especially in the cultural climate of convenient solutions to difficulties like this.

“The doctor said the babies won’t make it, and termination is the best option,” Amanda said. “I broke down. I wasn’t thinking about abortion, I was thinking, ‘Will they survive?’ Not ‘I want them to die.’?”…

“Some people were really supportive and thought I was doing the right thing … while others, not so much,” she said. “They would say things like, ‘the kids would suffer’ … ‘I’m selfish if I keep the babies because of how short their life span is’ … ‘they’re just going to die anyway.’?”

This pretty much sums it up:

Amanda said her blog has been a double-edged sword, with some contributors lifting her up, and others telling her to get an abortion.

Amanda said she will stand by her choice. “If they were in my shoes, maybe they’d see it differently.”

And the ultimate question:

Amanda said if mothers don’t protect their children, who else will?

This Sun-Times editorial sort of tries to reason this out, but with limited reasoning skills.

We are a pro-choice editorial page. We will always defend a woman’s right to choose to have an abortion.

The flip side of that coin is that we also will always defend a woman’s right not to have an abortion, even when that choice looks to us to be most unwise. Pro-choice means pro-choice, not pro-abortion.

Good, for starters. They cite Amanda’s case, heartbreaking as it is. And then say this:

Not sure who “all” they’re speaking for, but besides the babies’ expected short life span, the editors offer this “reason”:

The medical cost of Schulten’s pregnancy and delivery and the babies’ future care will be enormous, only a portion of which insurance will likely cover. And, really, what kind of life is ahead for these girls?

So the first sentence reveals a cost/benefit calculation on human life. And the second one applies the ‘quality of life’ standard that measures the objective good of human life by a subjective standard like the one increasingly used to justify euthanasia.

However, once said, editors pivot again.

But if Schulten was not convinced by such arguments, so be it. The call was hers to make — and hers alone. And we believe her when she says she will love her girls “always and forever, no matter what” and give up her “whole life” for them…

We defend her right to choose. What she chooses is her business.

That’s about as honest (though obliquely honest) a bottom line as any big media outlet has offered on this subject lately. Maybe the face and the heart Amanda Schulten brings to the question forces a more considered response.