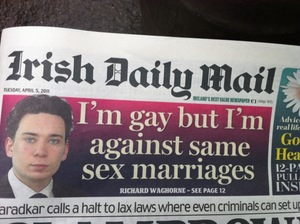 Intellectual dishonesty and shallowness in the arguments for bringing gay civil unions within the legal definition of marriage were laid bare last week in Dublin’s Irish Times by an opinion writer who professes same-sex orientation himself.  Richar Waghorne, who also writes for the Daily Mail, took issue with “a number of self-contradictory or inaccurate arguments” advanced earlier in the week by Irish gay-campaigner, Kieran Rose. All of Ireland’s main political parties have now adopted plans to legislatie for a redefinition of marriage laws to facilitate gay unions being recognised as such. However, the hurdle of Ireland’s written constitution would have to be overcome by the legislature before any such changes could be enacted.

The first fallacy exposed by Waghorne was the resort to public opinion data showing majority support for the introduction of gay marriage. While he did not question the accuracy of the data he pointed out that public opinion is, however, no more conclusive a reason to legislate for gay marriage today than hostile opinion was good reason to delay law reform concerning homosexuality decades ago.

“Gay activists retrospectively give false legitimacy to the criminalisation of homosexuality in Ireland until 1993 by adducing opinion polling to a debate requiring resolution by reference to the common good. If majority opinion today is good cause to introduce gay marriage, it must have been similarly good cause for the profound imprudence of the law until two decades ago.

“That this is absurd betrays not only a shallowness discernible in the case for gay marriage but also what has to be identified as a degree of intellectual dishonesty.”

He also exposes the self-contradictory weakness in the gay lobby’s argument that the Irish public desires the introduction of gay marriage while at the same time moaning about the Irish public harbouring a dangerous degree of homophobia.

Waghorne adds his voice to a growing list of people with same-sex orientation – Ben Bradshaw and Matthew Parris in Britain, for example – who do not support this campaign. “As for claims raised in the name of the gay community,” he says, “I would prefer if someone with whom I share nothing but sexual orientation did not use that rather uninteresting fact to raise in my name political claims I and others do not share.”

The gay lobby, Waghorne says, is arguing the case for the right to marry on the basis of it being a “human right”. This is for him no more than an assertion – and a weak one at that.  He points out that  France’s supreme court has found that no discrimination is implied in the distinction between marriage and partnership provisions and that the European Court of Human Rights has found there is no right to gay marriage in the European Convention on Human Rights and this does not amount to discrimination.

“In considering gay marriage, it is essential to see treating different situations differently in no way constitutes discrimination”, he says. He then points out that the natural right of children far out-trumps, the recently invented rights of the liberal establishment.

“What is more fundamental here,” he writes, “is the co-option of human rights language by an increasingly hegemonic strain of intolerant liberalism. Whereas the ‘right to marriage’ as pertaining to couples of the same sex is a recent invention, the right of a child to both a mother and a father where possible is not.

“The reason for opposing the unnecessary elevation of civil partnerships to the notional status of marriage is that marriage then loses its nature as the one institution supported by society because it is the family form which on average gives a child the most advantageous upbringing.

“It is agreed by most that civil partnerships mostly suffice in practical terms for same-sex couples. Altering the focus of marriage from children to relationships disadvantages future generations to no more necessary end than the further march of an increasingly cavalier and triumphalist liberalism.”