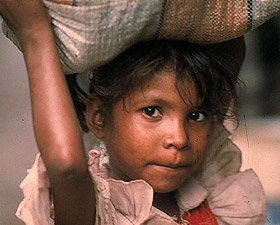 A couple of different topics today.  The first is that, despite the concerns of
the public affairs commission of the Anglican Church’s General Synod,
the Australian Government has not changed the baby bonus in yesterday’s budget
announcement.  The income limit on claiming the bonus is to
remain the same (AU$150,000 per year) for at least until 2014 (or until a
subsequent government, or this one, changes it).

The second topic comes from an indepth look at India’s “failing”
of its girls from the Associated Press.

It is a particularly sobering look at India’s gender
imbalance amongst the under 6 year old age category.


The
discrimination happens through abortions of female fetuses and sheer neglect of
young girls, despite years of high-profile campaigns to address the issue. So
serious is the problem that it’s illegal for medical personnel to reveal the
gender of an unborn fetus, although evidence suggests the ban is widely
circumvented.”

These
figures are even worse in some areas:


“In
Morena, a sun-baked, largely rural district in the heart of India, the numbers
are especially grim.


This
census showed that only 825 girls for every 1000 boys in the district made it
to their sixth birthdays, down from 829 a decade ago.”

But
not all of this by any means is down to abortion:

“District
hospital head R.C. Bandil said his facility strictly obeys the law against
using sonograms to reveal the gender of a fetus, adding that the sex ratio at
birth there is as high as 940-945 girls per 1000 boys.

That
is, you are far less likely to survive to your sixth birthday if you are a girl than if you are a boy,
even if you manage to escape being aborted because of your gender.  The article points to a couple of reasons for
this:


“Part
of the reason Indians favour sons is the enormous expense in marrying off
girls. Families often go into debt arranging marriages and paying elaborate
dowries. A boy, on the other hand, will one day bring home a bride and dowry. Hindu
custom also dictates that only sons can light their parents’ funeral pyres….But
it’s not simply that girls are more expensive. The census data shows the worst
offenders are the relatively wealthy northern states of Punjab and Haryana.”

The
fact is that “a deep-rooted cultural preference for sons remains.”  Leaving aside (and I struggle to do so) the horrifying
moral crimes of gender-selected abortion, neglect and starvation of tiny little
girls merely because they are girls and not boys, I wonder what the effect of
these statistics will be on India’s future.
There is an age cohort that is growing up where there are only 9 females
for every 10 males.  What impact will this
have on future population growth, with fewer potential mothers as a proportion
of the population?  What will life be
like for the 10% of males who will necessarily be without the chance of having
a wife and family?

It
would also be interesting to know what the gender disparity in India has been over
time.  If this is essentially a cultural
issue, then surely the pressure to have sons instead of daughters is not new. On
the other hand, the numbers of girls to boys has fallen in the last decade, so
perhaps this is a problem that is indeed worsening. Although the government is
trying to arrest this trend, through subsidies etc, it seems that such policies
are not working.  This is not surprising
when this view is common:

“Everyone
wants boys.  A boy takes care of you in
your old age”

The
future of India’s girls continues to look grim.