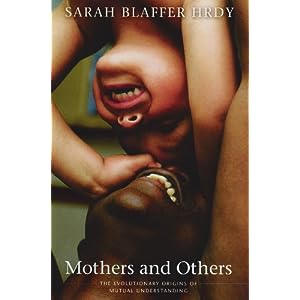 Two years ago an American primatologist named Sarah Blaffer
Hrdy published a book arguing that human beings evolved as a co-operative species
in response not only to the needs of infants but also to their charm. At least, I
think that what she says.

The idea had a lot of appeal, and Dr Hrdy, by all accounts, writes
beautifully, with the net result that a paperback edition of her book, Mothers
and Others: The Evolutionary Origins of Mutual Understanding, is being
published this week.

According to a New
York Times review, the core of her argument is this:

…human babies are so outrageously dependent on their elders
for such a long time that humanity would never have made it without a break
from the great ape model of child-rearing. Chimpanzee and gorilla mothers are
capable of rearing their offspring pretty much through their own powers, but
human mothers are not.

Human beings evolved as cooperative breeders, says Hrdy, a
reproductive strategy in which mothers are assisted by as-if mothers, or
“allomothers,” individuals of either sex who help care for and feed
the young. Most biologists would concur that humans have evolved the need for
shared child care, but Hrdy takes it a step further, arguing that our status as
cooperative breeders, rather than our exceptionally complex brains, helps
explain many aspects of our temperament.

Exactly why and how early hominims departed from the common
child-rearing practices of apes, or why their children developed such
dependency, seems to be lost in the mists of time. The important things is that
it brought out in us qualities like empathy and trust — human mothers are
unique in entrusting their babies to the care of others — and made us, says
the above reviewer, “emotionally modern” — “we became the nicest apes before
becoming the smartest”.

As someone who remains sceptical about our primate origins,
I nevertheless find Dr Hrdy’s theory quite attractive. If I understand her, babies bring out
the best in us. That sounds about right. Strange, then, that we have evolved to
the point (in rich countries, anyway) where babies are comparatively rare and a
growing number of couples dispense with them altogether. Are we in danger,
therefore, of losing the co-operative advantage through an erosion of that
empathy and trust that infants, in their dependency and charm, foster in us? Might
we regress into suspicious and aggressive ape-like creatures?

Of course, the “co-operative breeding” thesis has
implications for marriage and the family. But someone who knows Dr Hrdy’s work
might be able to enlighten us on that score.