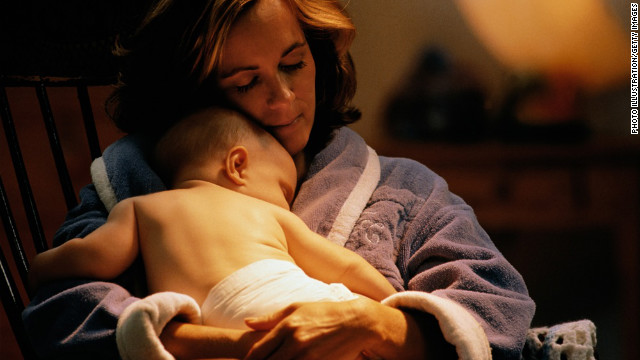 Chronic sleep deprivation is no picnic, as any new parent can tell you. One mom interviewed by ABC News called it “torture” and she’s not far off. Most parents have, at one point or another, contended with babies who just don’t want to go to sleep at night. How to solve this dilemma has been hotly debated for decades by parents and ‘experts’ alike (these groups needn’t be considered mutually exclusive, but sometimes are).

Traditionally it’s been the “cry it out” camp versus no-cry, ‘attachment parenting’ methods. Disclosure: I’m in the latter group. I could never listen to my babies cry when it was in my power to alleviate their distress—even when I actually couldn’t, and ended up walking the floor for hours with an inconsolable infant. (Occasionally my husband woke up and relieved me, which leads me to wonder why no research has gone into extracting and bottling the dad’s ability to sleep soundly).

I won’t argue either side here, because it’s been done—repeatedly. An Australian study, published in Pediatrics, says it’s OK to let babies cry, as noted recently by most major news outlets. But these sites are cautious to qualify their remarks. NBC News phrases it thus in the tagline for their video clip: “for babies of the right age, and done in a controlled way, letting them cry a bit at bedtime doesn’t do any harm.” (emphasis mine)

Australian researchers looked at 225 babies from seven months to 6 years of age to compare the difference between parents who were trained in sleep intervention techniques and those who were not.

The study looked at two sleep-training methods known as controlled comforting and camping out, both of which let babies cry it out for short amounts of time. Controlled comforting requires the parent to respond to their child’s cries at increasingly longer intervals to try to encourage the baby to settle down on her own. In camping out, the parent sits in a chair next to the child as he learns to fall asleep; slowly, over time, parents move the chair farther and farther away, until they are out of the room and the infant falls asleep alone.

Frankly, the camping out method sounds more exhausting than just taking the baby to bed with you (it’s technically called “co-sleeping” and it certainly worked for me). But both methods employed in the Australian study seem (if you’ll pardon the expression) a far cry from the “shut the door and ignore them no matter how much or how long they scream” methods recommended to me when I was a young mother.

Nevertheless, I found this comment from the ABC article disturbingly amusing:

Experts not involved with the study said the findings make sense. […] “While stressful for the infant, [crying] almost certainly falls under the ‘positive stress’ heading,” said Rahil D. Briggs, director of the Healthy Steps program at Montefiore Medical Center in New York. “Positive stress creates growth in the child, in the form of coping skills and frustration tolerance that serve to be critically important throughout the life span.”

“Positive stress” for babies—seriously? I’m an adult and I still can’t seem to appreciate that stress has an upside. Which leads one to conclude that alas, if you have a pet theory, you can find a scientific study to support it, and an expert to applaud it.

The TIME article notes that over 300 families began the study, but 30 percent dropped out before it concluded. Families were followed for five years, at which point it was scientifically determined that the children suffered no ill effects from the sleep-training techniques (sarcasm alert). I’m not sure that’s a wide enough time frame in which to make such a determination, but really, how could it be done? Follow the children for 30 years to make sure no one became a career criminal or sociopath? And if they did, could you definitively trace it back to infant sleep patterns?

I don’t mean to be flippant but I admit that middle age has mellowed a few opinions in regards to parenting. I’m sure I made my share of mistakes, yet my adult children are pretty nice, normal people. I also have friends who employed various degrees of “controlled comforting” and their adult children are pleasant and well adjusted too. Bedtime routine may be important, but it’s a relatively small part of parenting well.

Letting infants cry seems like an unhappy option, but when parents are stressed nearly to the breaking point, it could be argued that leaving a baby to cry in his crib is infinitely preferable to physically harming the baby, which has been known to happen all to often. Even more preferable is for parents to consistently respond to their children with love and compassion, and for society to give families the moral support they need to do a proper job of bringing up future generations.

Oh, and if you think baby bedtime is a challenge, try Night Terrors (think sleepwalking, on steroids), where older children (4-12) randomly sob, scream, and sometimes run all over the house in the middle of the night. You can’t wake them or comfort them. You just see them safely back to bed each time, and generally wait for them to outgrow it. Normal infant crying spells are actually fun by comparison.

Just remember: “this too shall pass,” because it does and it will. Happy parenting.