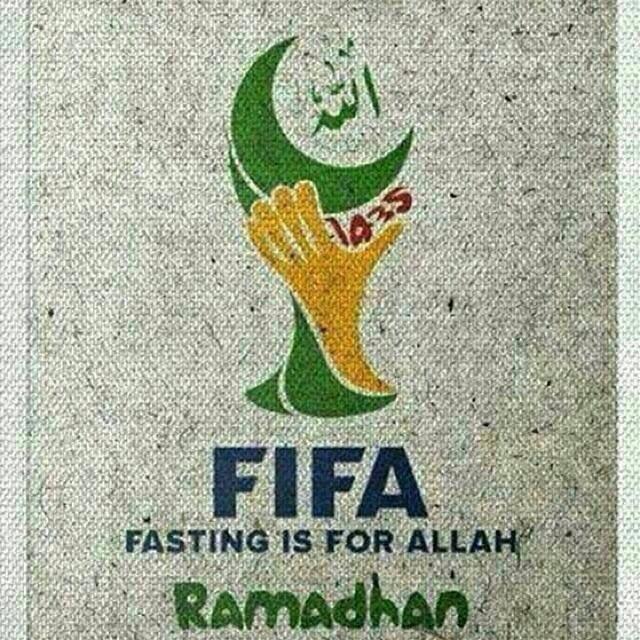 Nothing has done more to refresh the image of Islam than the World Cup in Brazil. This is the first year since 1986 that Islam’s most important religious event, Ramadan, and the world’s most important sporting event have overlapped. The main feature of Ramadan, one of the five pillars of Islam, is a month-long sunrise to sunset fast from all food and drink. Its timing varies with the lunar calendar, so this year it began on Sunday, June 29.

Because of Brazil’s oppressive heat, the media has been abuzz with speculation about how a strict fast will affect athletes’ performance.

The curious thing is how respectful Western journalists have been towards an unfamiliar religious commitment. Newspapers have been full of Muslim players professing their devotion and explaining the benefits of a strict fast.

Algeria was the only Muslim country to make the final 16 in the tournament, but the squads of Nigeria, Switzerland, Germany, Belgium and France all have Muslim players. Almost none of them will observe the Ramadan fast. In the Islamic tradition there are exemptions from the fast for the sick, warriors and travellers. Sometimes the fast is observed later on, although some religious authorities frown on this.

Ramadan presents big challenges for elite athletes. No food or drink should pass their lips from sunrise to sunset. In the evening, there is a special meal, the iftar, and in the early hours of the morning, another called suhoor. But the danger of bingeing at night is an unbalanced diet, dehydration and broken sleep.

Not all of the Muslim players feel obliged to observe the Ramadan fast, but many do. In their explanations to the media they express their pride in their religion and their determination to cope with thirst and exhaustion.

Why do Muslim players observe the Ramadan fast?

Because they take their religion seriously. In their eyes God is worthwhile.

Here’s what Kolo Toure, a brilliant player for Liverpool during the year, and a star on the Ivory Coast squad in the World Cup, had to say:

I’ve been observing Ramadan during all the years I’ve been in football. It’s been tough, but at the same time I feel like I am much stronger, because my mental condition takes over. It’s definitely hard, but when you believe in God, nothing in impossible…

He appreciates the self-discipline involved in faithfully observing a fast:

Yes. You definitely need discipline. For me, the first five days are difficult but after that, the body just starts to [adapt] and you feel really happy. You clean your body as well and you feel even stronger after Ramadan … I think it’s amazing how Ramadan can make you really strong.

And at the end of Ramadan, he celebrates with his family:

The celebration is big – everybody is very happy because it has normally been a tough month. Ramadan is an important part of Islam, and when you are observing it, God is happy with you and you have to have a big celebration. We eat, we have a party and we give praise.

What does the controversy say about most Muslims?

That they are devout — but flexible.

Although a number of European Muslim players normally observe Ramadan, none of the players in the final 16 of the World Cup plan to. The sudden rise of ISIS in Syria and Iraq and its sadistic and brutal violence and human rights violations could give the impression that Islam is necessarily fanatically rigid. But most devout Muslims are moderate and accommodate themselves to circumstances.

Even in secular Western societies with a hyper-secular media, many Christians are bound to find it refreshing to hear high-achievers express their commitment to a transcendent cause with unabashed simplicity.

What does the controversy say about Islam?

That there is no authority to settle disputes definitively.

Obviously the pragmatic solution to this conflict between the demands of Islam and the demands of soccer is to skip or delay the fast. Some Muslim authorities gave it their blessing. In Algeria a High Islamic Council – which was appointed by the government — has advised players that they can defer the fast. Sheikh Mohammed Sherif Kaher, the head of the body’s commission for religious opinions said, “those playing can abstain from fasting”. And the Islamic Al-Azhar academy in Cairo, an authority in the Sunni world, has endorsed it as well. “Sport has become a work in which people specialize and for which they receive a salary. If such work is hampered because of the fast, then it is lawful to break it,” Sheikh Abdelmoti Bayumi opined.

But other Islamic authorities disagree vehemently. “It is not allowed for an Algerian player to avoiding fasting just for a game. They must fast because God is with those who fast, and young people can fast and play at the same time,” said Mohammed Mekerkab, the head of Algeria’s association of religious scholars. In his opinion, sportsmen are not bona fide travellers who are normally exempt.

In Muslim-majority countries, players are not expected to take the soft option. Ali Karimi, an Iranian player who was called the “Maradona of Asia”, was sacked from his club in 2010 because he refused to fast.

Once again, this controversy highlights Islam’s lack of a central authority. Unlike Christianity, especially the Catholic Church, there is no final arbiter on religious questions. By shopping around, one can always find a Muslim authority for every taste.

Will the World Cup change Muslim views about fasting?

According to the Apsetar Sports Medicine Journal, a Qatari publication, “in Muslim-majority regions athletes will often chose to fast every day because of the social support and culture. In addition, they will receive full support and convenient training and competition plans from organisers.” The World Cup is an exceptional event and it is unlikely that the Muslim authorities will continue to hand out exemptions from the Ramadan fast. Players are used to coping with the rigours of a fast and will not expect to be excused. Dr Hakim Chalabi, a sports medicine specialist with the Algerian team says that fasting is not always a hindrance to players. “Oddly, in some cases, there are athletes that get better results during Ramadan because they are fasting and want to,” he said. “It can be a spiritual and psychological aid.”

If the number of Muslim players in European clubs continues to grow, we can expect to more conflict between religious observance and sporting performance. In 2009 three Muslims playing in a German club were rebuked for failing to inform their coach that they were going to observe the Ramadan fast. Some of these cases could possibly end up in court with players demanding special consideration to accommodate their religious beliefs.