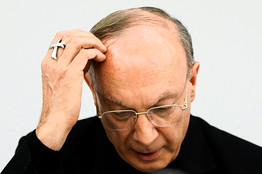 A police raid on Catholic Church sites in June was illegal, the Brussels Court of Appeals said on September 9. The court also held that measures taken were “disproportionate”, and that documents seized must be returned and cannot be considered as valid evidence in any trial. Zenit reports:

At that time they drilled holes in two graves located in the crypt of the cathedral, and then sent cameras down in search of hidden documents.

In addition to the headquarters of the archbishopric of Brussels, the authorities seized some 500 confidential files In Leuven, Belgium, from the office of Peter Adriaensses, president of the commission for the treatment of sexual abuses. The home of former archbishop of Brussels, Cardinal Godfried Danneels, was also searched.

The Court considered that the investigators acted without possessing specific indications of a violation of criminal law by the Archdiocese or Cardinal Danneels and in fact carried out an illegitimate and illegal fishing expedition.

Archbishop André–Joseph Léonard, primate of Belgium, hopes this verdict will allow the Belgian Church to direct its full attention to those who have been victims of sexual abuse in a pastoral relationship and who deserve proper recognition and support. It is the Bishops hope that the judgment of the Court of Appeals will help restore confidence among all parties in this matter.

On another note, it would be refreshing to see this judgment receive as much publicity as the illegal raids did including the desecration of the grave of a former archbishop. I won’t hold my breath.