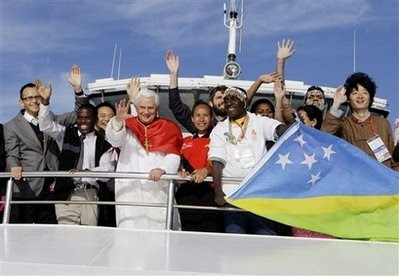 Imagine this. You gave fifty years to the world’s biggest organisation, were based in a foreign land, and had put in a couple of official resignation letters as you were getting old and wanted to go home. You were 78, after all. But then the CEO died and you got voted as his replacement. Oh, and declining is not really the done thing.

How long would you have lasted? I say that the man formerly known as Joseph Ratzinger has gone above and beyond the call of duty.

Seven years after the baton was shoved in his hand, Pope Benedict XVI has done what John Paul II couldn’t afford to let him do — retire. On 28 February at 8pm he will leave the Catholic Church in a popeless situation. That is, until a plume of white smoke rises from the Sistine Chapel –the symbolic product of a beneficial ballot-burning for Pope number 266.

But sadly, you won’t hear much praise going the way of this brilliant man who has done the job for nearly eight years in the coming weeks.

The politicking that we are led to believe the college of cardinals engage in to get the “top job” seems to me to issue from the same old talking heads that drone on about US Presidential elections, trying on such vacuous titles as “Vatican insider”, “papal expert” and — my favourite — “Vaticanologist”, for a little off-season practice.

If you are an ex-priest for example, you are definitely the most sought-after voice on the subject, at least in Australian media. I have heard two speak already today.

Enough with the political pontificating I say. Do people really think that Benedict threw his own zucchetto in the ring, to swap it for a white one as a fitting reward for his years of dedication?

A New Zealand priest was once credited as saying that when a Pope dies (or resigns!), all the cardinals travel to Rome and, before heading home, leave one behind to be crucified.

It does happen. At least it used to. The first successor of Jesus followed him to the cross, albeit upside down, as he didn’t feel worthy enough to die in exactly the same way. Dozens of others were brutally martyred in other creative ways.

But anyone without a chip on their shoulder can see that every pope does get crucified in one way or another. And each one, in their own way, expresses the humility of a humble servant like Peter the Apostle did.

I was with Pope Benedict on Sydney Harbour during World Youth Day in 2008. We were just cruising around, and did a little trip from Rose Bay around to Cockle Bay. Nice day, just him and me. Well OK, there were another few hundred on the boat, and hundreds of thousands lining the harbour. But it felt like we were just there together.

Particularly at a moment when he looked directly at me – I was about three or four metres away and had been waving and smiling rather enthusiastically — as if no one else was looking he changed his expression at me for a split second. He shrugged and gave me a look which clearly said: “Hey, I’m human after all, what’s with all the fuss?”

The face matched his first ever words as Pope identically: “The Cardinals have elected me, a humble servant in the vineyard of the Lord.”

The fact that Pope Benedict has dedicated the rest of his years on earth to prayer is a good sign to Catholics that his shock decision is a result of prayer. They can rest easy that the man knows what he is doing. With a great deal of humility and self-awareness, he has the clear notion that he is no longer up to the task.

The fact that he has done things differently to Pope John Paul II is no slight on either of them.

I was also lucky enough to meet John Paul II, who was recognised globally as an extraordinarily charismatic man. Should he have resigned, he would still have commanded all the world’s attention and certainly taken it away from his successor. I think that’s one reason he went right to the end. His body may have given out, but his mind was sharp as an arrow. Read anything from Pope John Paul II from his final years and you will be impressed.

Pope John Paul II gave a heroic example of perseverance and commitment usually only seen and lauded when war heroes and, more commonly, sports heroes strap on the boots for another tour of duty.

Pope Benedict XVI is a different man but equal in stature to John Paul. I am sure there is a great deal of wisdom in his decision, because he is the world’s wisest man. But ultimately, not a single soul other than him will ever know the deepest reasons he has.

Only the Pope knows, and pundits can only pontificate.

Alex Perrottet is a radio journalist based in New Zealand and was Master of Ceremonies at World Youth Day with Pope Benedict in Sydney 2008.

Alex Perrottet is an Australian journalist currently living in New Zealand and the contributing editor of Pacific Media Watch. More by Alex Perrottet