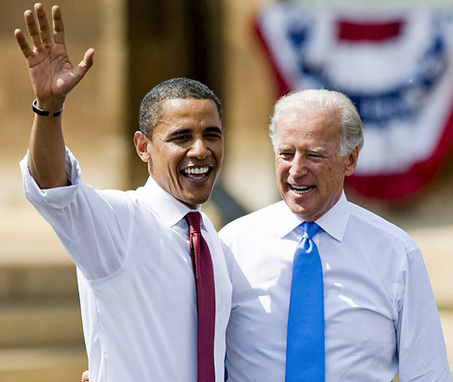 US Vice-President Joe Biden may be comfortable with gay marriage but he should be very uncomfortable about the disingenuousness of his performance on NBC’s Meet the Press on Sunday night. When asked about where President Obama was now in the evolution of his view on the subject Mr. Biden pleaded ignorance when it must be clear to all but the most naive that he could only be a stalking horse for the President on this issue. There can be little doubt now that if Obama gets a second term the entire United States will be told to become comfortable with same-sex marriage.

The New York Times reported the Vice-President’s own evolution following the programme and did so in such terms that we can only see this evolution as part of the team’s ticket for a second term.

“Still unclear was whether Mr. Obama might have been using a top surrogates to send a message, as he seems to have done before on this subject,” was what the Times said. They are not that naive.

The NBC interviewer, David Gregory, put the question directly to Mr. Biden during Sunday’s appearance: Would Mr. Obama support same-sex marriage in a second term? “I can’t speak to that,” he said. “I don’t know the answer to that.” He should have been straight about it and said “I won’t speak to that,”  and at least, “I’ve a pretty good idea of the answer to that  but I’m not going to say anything about it – yet”.

Of course Mr. Biden trotted out the political mantra, “The president sets the policy,” and his aides later indicated that the views he expressed were his own. The White House for its part was quick to say that the Vice-President had articulated no change in the administration’s official position on same-sex marriage. But gay rights advocates were delighted with Mr. Biden’s remarks and the support it seemed to convey for their relentless campaign.

Mr. Biden, without any reference to the issues raised by those who defend marriage as an institution which is about conjugality, went down the familiar sentimental route: “I just think that the good news is that more and more Americans have come to understand that what this is all about is a simple proposition. Who do you love? Who do you love?”

This is all part of a softening up process. Last year, Secretary of State Hillary Clinton said in Geneva that ”gay rights are human rights, and human rights are gay rights,” a message that Mr. Obama later enthusiastically endorsed. When Shaun Donovan, the secretary of housing and urban development, expressed his support for the right of same-sex couples to marry, a senior administration official said that Mr. Donovan enjoyed ”the trust and respect of the president.”

As far as federal legislation on this issue is concerned the writing is clearly on the wall if the Obama team returns to power after November’s elections. Barack Obama is coming back to where he left off in 1996 when, as a candidate for the State Senate in Illinois, he wrote on a candidate’s questionnaire that “I favour legalizing same-sex marriages.”