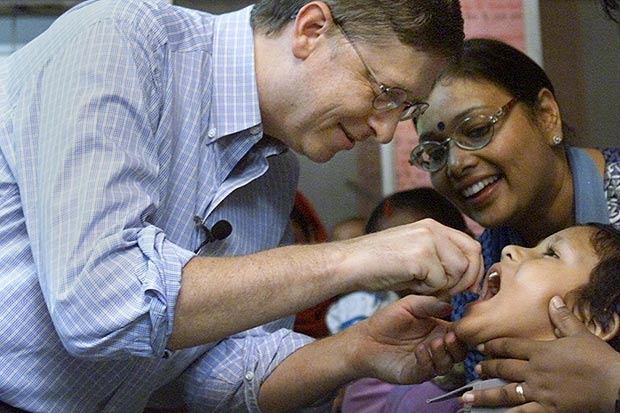 Bill Gates is a man used to thinking big and accomplishing his goals. So his emergence as a leading voice in the global campaign to eradicate polio makes a lot of sense. It makes sense, too, as part of a larger philanthropic commitment to what he calls “global health equity” through the Bill and Melinda Gates Foundation, and his belief that vaccines are a key to savings millions of lives in the developing world and lifting people out of poverty.

What it doesn’t quite fit with is his idea that, sick or healthy, there should be fewer people in certain parts of the world.

As those who grew up in the West in an era a iron lungs and crippled children societies know, polio can be a devastating and sad disease — at worst, fatal, at best hampering free movement for life. The arrival of vaccines by 1960, however, had a dramatic effect: polio was virtually wiped out in the developed world, and became a third world disease.

Bill and Melinda Gates are relative latecomers to the challenge of third world polio. Rotary International began their campaign in 1985 and then became partners in the Global Polio Eradication Initiative launched by the World Health Organisation and other collaborators in 1988. Since then, cases of polio have fallen by more than 99 percent, but it has taken much longer than anticipated, has cost around US$11 billion, and there are still three countries where it is still endemic: Nigeria, Pakistan and Afghanistan.

Gates, whose foundation made its first contribution to the campaign in 1999, is personally committed to seeing those countries polio free. In a public lecture sponsored by the BBC a few weeks ago the Microsoft founder said that delivering the polio vaccine to all children in the remaining countries is currently the Gates Foundation’s top goal. It has given well over a billion dollars to the cause and, according to the London Telegraph, will spend another $1.8 billion on polio eradication over the next six years — almost a third of the global effort.

Why polio? After all, there were only 215 cases worldwide last year and they were all in three countries. Some health experts have argued that the present levels are probably as good as it gets and that it is time to direct more resources to other endemic diseases, such as diarrhoea, malaria and measles, that ravage the infant populations of third world countries.

Sceptics might say that the polio campaign has become “too big to fail”. But the WHO insists that it is not possible to keep polio at low levels because of the kind of disease it is: a virus that spreads silently and produces symptoms in only one percent of infected people — symptoms that are not even unique to polio. By the time a case is confirmed it may have travelled hundreds of miles in any direction. Outbreaks in northern Nigeria in 2003-2004 spread not only to neighbouring countries but all the way to Indonesia, following the route of the Hajj pilgrimage.

To pull back now, says the head of the Global Initiative, WHO Assistant Director-General Bruce Aylward, means accepting that before long there will again be over 250,000 paralysed every year. The only way to stop polio is to vaccinate a very high percentage of the population, at least 80 percent, to achieve what is known as “herd immunity”. And the vaccine must be administered at least three times to each child.

But it can be done. India, with more than a billion people — and 75,000 born every day — has become the trophy nation for the cause after reporting no polio cases in the last two years. That is thanks to a largely government funded programme that employed two million people to walk into the remotest communities, sometimes through flooded rivers, carrying boxes on their heads in which the vaccine had to be kept cold.

Gates said in his recent BBC lecture that India’s success in wiping out polio “is the most impressive global health success I’ve ever seen.” But to him, eradication in the remaining areas is not just a patently achievable global health goal; it is also a test case for wiping out other diseases, and a moral victory that will inspire other efforts.

A test case: “[S]uccess will generate lessons that benefit all of global health. We are on the verge of doing something we’ve never been able to do before — reaching the vast majority of children in the remotest places in the world. We are building systems, developing technology, and training workers that make it possible to help people who never got any help. When polio is gone, we can use the same systems, technology and people to deliver other life-saving solutions, especially routine vaccinations for diseases like rotavirus and measles.”

A moral victory: “By doing something really hard for each other, we will demonstrate what is best about humanity. And that will inspire us to be more ambitious about what is possible in all our endeavours.”

But the polio campaign makes another moral claim on us, he suggests. A number of vaccinators have been killed while carrying out their mission, some very recently. In Pakistan, nine of these health workers were shot dead in mid-December and another seven at the beginning of January. Just a week ago nine women were shot dead in Kano in northern Nigeria. They are heroes, says Gates, and we should honour their memory — first, by making the work safer for others, and second, by finishing the task they gave their lives for.

The murders, however, show that the last lap of the wipe-out-polio marathon is not just a matter of money and innovation, or even heroism. The vaccination campaign has become another sort of test case, one that has to demonstrate to suspicious, if not hostile communities that global health initiatives are above any Western political agenda, including population control.

The fact is that the remaining pockets of endemic polio are in predominantly Muslim regions seething with insurgency and conflict. Northern Nigeria and parts of Afghanistan and Pakistan are war zones where radical Muslims — Boko Haram in Nigeria and Taliban factions in the other two countries — have turned polio immunisation into a political weapon. In one area of Pakistan a Taliban group have blocked access to children while they demand that the US stop the use of unmanned drones — which have killed far more people, including young children, than the numbers paralysed by polio in the past few years.

The CIA did further damage to the immunisation cause in 2011 by running a fake hepatitis-vaccination campaign around Abbottabad, where Osama bin Laden was hiding, in order to obtain DNA samples from his family and confirm his presence there. When this became known in the community it bred mistrust and refusals, especially in Taliban strongholds.

Even further back there was mistrust of polio vaccination because of a rumour that it was part of a Western plot to sterilise Muslim girls. This led to boycotts in northern Nigerian states in 2003-04 and fresh outbreaks there and in neighbouring countries. This rumour persists and is used by some clerics and warlords to enhance their own power.

Given the population control philosophy of the WHO and most major players on the development scene, however, the rumour has a certain plausibility, and this is something that Bill and Melinda Gates should think carefully about.

The couple undoubtedly have a genuine commitment to giving the world’s poorest a hand up through improving their health. But they also are thoroughly committed to global birth control. Melinda Gates upped her profile on the issue significantly last year, recording a TED talk in front of an international audience and partnering with the British government in a new push “to deliver more modern family planning tools to more women in the world’s poorest countries”. She has even, recently, promoted a hormonal contraceptive injection (DMPA) that may facilitate, according to research published in 2011, the transmission of HIV in Africa.

Bill Gates in his BBC talk noted that one spinoff of improving basic health and infant survival is that, “when parents are more confident their children will survive they tend to decide to have fewer children, gradually bringing population growth down and leading to all sorts of beneficial effects.”

That is true, but the Muslims of Nigeria, Afghanistan and Pakistan have the right to ask, “Is that your real interest in our health? Are you doing this to make life better for us, or for yourselves?” A global policy trail stretching well back into the 20th century could easily be interpreted to mean that First World self-interest is uppermost.

The Gates are smart people; can’t they see that one of their big goals casts suspicion on the other?

It would be so much easier to make that suspicion go away if the leading players in the global health game could put their hands on their hearts and say: “We have absolutely no interest in controlling the fertility of your country or community. It’s entirely your affair.” But don’t hold your breath waiting for that to happen.