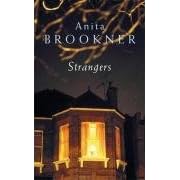 Do I detect a new genre of film and
novel emerging about below-replacement fertility? The first that came
to my attention was Alfonso Cuarón's bleak film Children of Men.
This was set in the UK in
2027, when global fertility has mysteriously dropped to 0.00. P.D.
James's novel with the same title, upon which thefilm is based, is,
if anything, bleaker still.

Now I see that Booker Prize winner
Anita Brookner has published a new novel, Strangers, about a
retired bank manager who has no wife, no children and no relatives.
It is "a brilliant and affecting creation," according to
Sebastian
Smee's review in the London Spectator. Paul Sturgis is
"haunted by a feeling of invisibility", reflecting on what
"a terrible thing [it is] to live without witnesses." "His
habits," writes Brookner, "were ineradicably solitary";
"a sadness…. had become the very climate of his life."

His only relative is a distant cousin
whom he visits out of a sense of obligation because he senses that it
is "essential to possess not only a relative but a relative who
would prove to be near at hand." Alas, she drops off her perch
half-way through the book and Sturgis's life becomes even more lonely
and meaningless.

Not exactly a pageturner to snuggle
under the covers with and read by flashlight, I think. But the
portrait of an ageing gentleman in London rings true. In societies
where many, if not most, people have had only one child, their only
relatives are ancestors. Novelists are better at imagining the
consequences than the Optimum Population Trust. Is it better to have
a big family, a big and blotchy carbon footprint, and happiness? Or
no family, a faint smudge of a carbon footprint and an old age of
quiet desperation?