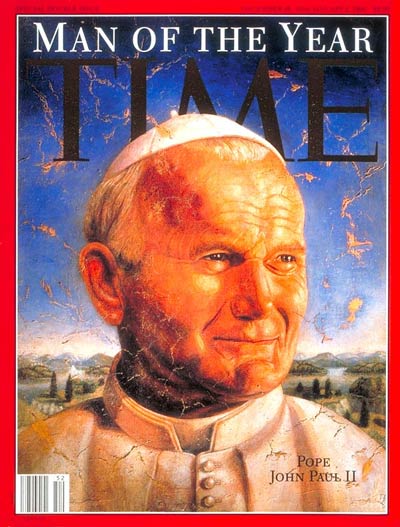 After he passed away and it seemed like most of the world converged on Rome to mourn the loss but also to celebrate a life that so touched humanity,cries of “Santo Subito!” went up from St. Peter’s Square. Looks like the crowds are getting their wish.

This was just announced today.

On 1 May, the second Sunday of Easter and Divine Mercy Sunday, Benedict XVI will preside at the rite of beatification for John Paul II in the Vatican.

He passed away on the vigil of Divine Mercy Sunday.  At the time, one observer said ‘If the world is a global village, he was the village priest.’ Indeed.

“John Paul II did everything he could for life, to defend life,” (Sister Marie Simon-Pierre) said. “He was very close to the smallest and weakest. How many times did we see him approach a handicapped person, a sick person?”…

“Pope John Paul’s life is precisely such a model because it was lived beautifully and with love, respect and forgiveness for all,” [Knights of Columbus head Carl] Anderson told the AP in an e-mail. “We saw this in the way he reached out to the poor, the neglected, those of other faiths, even the man who shot him…

Forgiveness is more powerful than evil. And love is stronger than death. He taught the world both.