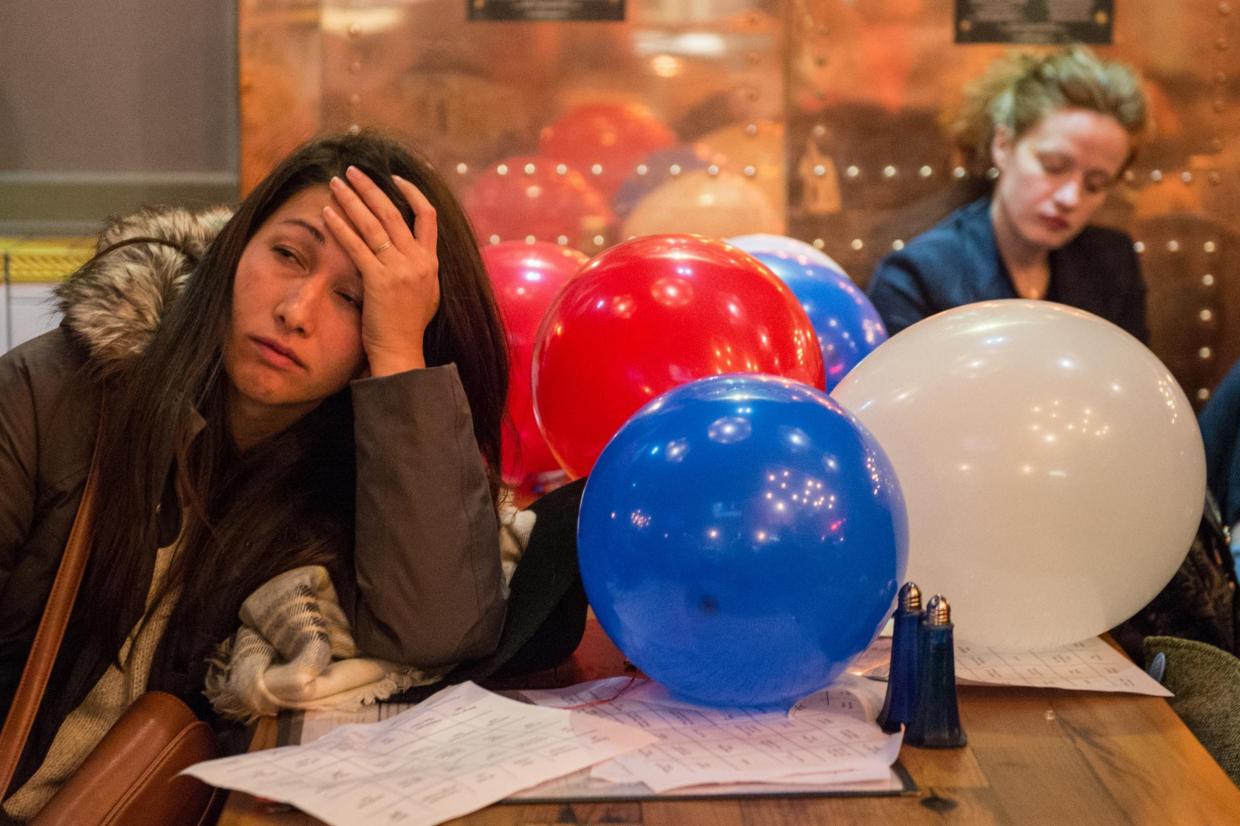 In the wake of the resounding Trump victory this week, the progressive community is slowing working its way through Kübler-Ross’s five stages of grieving.

The stage of denial is past; Hillary Clinton has conceded; Barack Obama has invited Voldemort to the White House.

Anger is the second stage and there is anger aplenty. Merely reading the headlines in websites like Vox, Slate and the New Yorker is likely to send some readers off to their therapists. The magazines are overflowing with self-hatred and fear.

Here are a few examples from Slate, one of the most popular sites:

A Bunch of States Just Legalized Weed, Which Is Great Because We All Need It Now

And from Vox, a new but very successful site devoted to “explaining” the news:

Trump’s win is a reminder of the incredible, unbeatable power of racism

Why the Electoral College is the absolute worst, explained

The lead article in The New Yorker, was written by its editor, David Remnick: An American Tragedy: The electorate has, in its plurality, decided to live in Trump’s world of vanity, hate, arrogance, untruth, and recklessness.

The despair is so deep that it approaches Saturday Night Live parody. The faster the staff of these journals can move on to the later stages of bargaining, depression and acceptance the better for their mental health.

The striking thing about this hysterical hyperventilation is that these writers loathe the electorate as much as they do Donald Trump himself. The common thread among progressive pundits is that Trump voters are white racists, fearful of losing their hegemony in an increasingly diverse American society. White women ought to be sickened by Trump’s misogyny, but their fear of people of colour is greater. “What leads a woman to vote for a man who has made it very clear that he believes she is subhuman?” wrote an editor of Slate.  “Self-loathing. Hypocrisy. And, of course, a racist view of the world that privileges white supremacy over every other issue.

Disgust, a blind, visceral fear of diversity, explains nearly everything. These benighted voters were utterly incapable of reaching out to and understanding the Alien Other.

Actually, that sounds very much like a description of journalists at Slate, Vox, Huffington Post, the New York Times (with some exceptions) and so on. They are incapable of understanding those Alien Others who are family-oriented voters.

When the journalists progress to the next stage of grief, however, they ought to consider the possibility that some of the concerns of Trump supporters are rational, despite the flaws of the man himself. After all, exit polls showed that only 8 percent of people who voted for Trump thought that having the right experience was important and only 26 percent thought that having good judgement was. But 83 percent thought that “bringing needed change” was important. They weren’t voting for a man; they were voting to rebuild America’s social, physical and moral infrastructure.

It is remarkable that none of the journalists ever mentioned a million abortions a year, drug addiction, family instability, euthanasia or same-sex marriage. The idea that these were rational concerns for voters was as incomprehensible to them as fear of deportation to Mexico might be to a white factory worker in Youngstown, Ohio. That’s surely one reason why none of them foresaw Trump’s victory: they were blinded by the bigotry of no expectations.

Even the best journalists have blind spots, but contempt for family values isn’t a blind spot; it’s a mental cataract.

This is part of what enraged Trump voters about Clinton. She was absolutely uncompromising about “reproductive rights” and “LGBTQI rights”. She and her followers could not even conceive that the other side had any claim on truth. Behind her smile and good manners, she was an intransigent ideologue. Supporters of family values felt disenfranchised and afraid.

True, some of Trump’s supporters were out-and-out racists, just as some of Clinton’s were viciously anti-Christian. But “inclusion” versus “racism” is an inadequate frame for this momentous shift in American politics. The two poles are not rainbow-coloured diversity versus a white monoculture, but radical individualism versus family values.

With his lurid past Trump is no poster boy for strong, stable, united families, but at least he gives family values lip service. Under his Administration a space opens up for the arduous task of reviving the American family.

It had to happen sooner or later. As President Obama often said, “The arc of the moral universe is long, but it bends towards justice.” It’s odd that a blustering reality-TV star may have become the last best hope for the family, but history has a way of springing surprises on us.