Hatred of “hate speech,” however such speech is to be understood, works fine when all agree on the speech to be disdained and its target. However, in an era of microaggressions and among a generation that Newsweek rightly suggested “hates speech,” almost anything can qualify as “hate speech,” it seems.

This leaves those so concerned to seek to determine with increasing precision just whom might be offended or feel unsafe by a particular word or phrase. Ironically, the effort to establish such “safe places” often winds up setting off its own war, of words if not worse.

PETA (People for the Ethical Treatment of Animals) experienced some of the shrapnel on December 4 when it launched its own contribution to Twitter’s effort to rid the world of dehumanizing language. In so doing, it revealed more of its own anti-human agenda, to the apparent surprise of many. It “let the cat out of the bag,” so to speak, as to its own war against the uniqueness of the human species.

Making the world safe for speech?

Back in September, Twitter rolled out a proposal to revise its hateful conduct policy, which “prohibits the promotion of violence against or direct attacks or threats against other people on the basis of race, ethnicity, national origin, sexual orientation, gender, gender identity, religious affiliation, age, disability, or serious disease.” The focus on “other people” in the policy needs to be highlighted, because it is there that PETA has historically confused human beings with the wider animal world and where its recent admonitions aroused considerable consternation.

Twitter has remained concerned about tweets posted that contain abusive language (social media seems to bring this out in many people!), so the company proposed an expansion of its hateful conduct policy “to include content that dehumanizes others based on their membership in an identifiable group, even when the material does not include a direct target.”

What constitutes “an identifiable group” is somewhat amorphous, which perhaps provided the proverbial “camel’s nose in the tent” for PETA to attempt to expand the Twitter policy beyond humans to the entire animal world.

Twitter defined “dehumanizing language” as “language that treats others as less than human,” which “can occur when others are denied of human qualities” or “denied of their human nature,” such as occurs when some group is compared to animals and viruses.

Such use of dehumanizing language has been endemic to the human condition since time immemorial, with one group categorizing an enemy or target group as less than human in order to subdue or kill them. During westward expansion, European Americans often characterized Native Americans as “savages” and sub-human. During the Holocaust, Nazis spoke of Jews as “rats.” Hutus involved in the Rwanda genocide called Tutsis “cockroaches.” Slave owners throughout history often considered slaves as subhuman animals. Fundamentalist Islam has historically spoken of Jews and Christians as “apes” and “pigs,” respectively.

All of this evinces the power of “words as weapons,” as Susan Benesch entitled a 2012 World Policy article. Such words can be used to justify the killing of thousands of people, even millions in the case of the Jews during the Holocaust. It is the painful irony of humanity that its unique capability to form higher order thoughts using language has been used so often for such low and conniving machinations in the subjection and murder of others of its own species.

Before updating its rules, Twitter solicited feedback from the general public until October 9. PETA offered its support of the Twitter Dehumanization Policy in a news release on October 8, “wholeheartedly endorsing the policy,” but for other reasons. Calling someone a “pig” or a “dog,” PETA observed, is “supremacist and speciesist.” Additionally, using such language may have the effect of “normalizing violence against animals and desensitizing people to their suffering.” Thus, whereas Twitter was drawing on the likes of Benesch’s Dangerous Speech Project that is concerned with addressing people as insects or animals, PETA was in effect concerned with addressing insects or animals as (equivalent to) people!

Safe speech for whom?

On December 4, PETA posted a tweet against using anti-animal language, using its new tagline “Bringing Home the Bagels Since 1980”! Bagels? That was in lieu of the more readily recognizable bacon, which PETA wants to help us remove from our language (“bring home the bacon”), along with all other animal products from our diets and lives as a whole.

PETA also wants us to change our language because, as the tweet stated, “Words matter, and as our understanding of social justice evolves, our language evolves along with it. Here’s how to remove speciesism from your daily conversations.” To help us “Stop Using Anti-Animal Language,” PETA offered other substitutions: 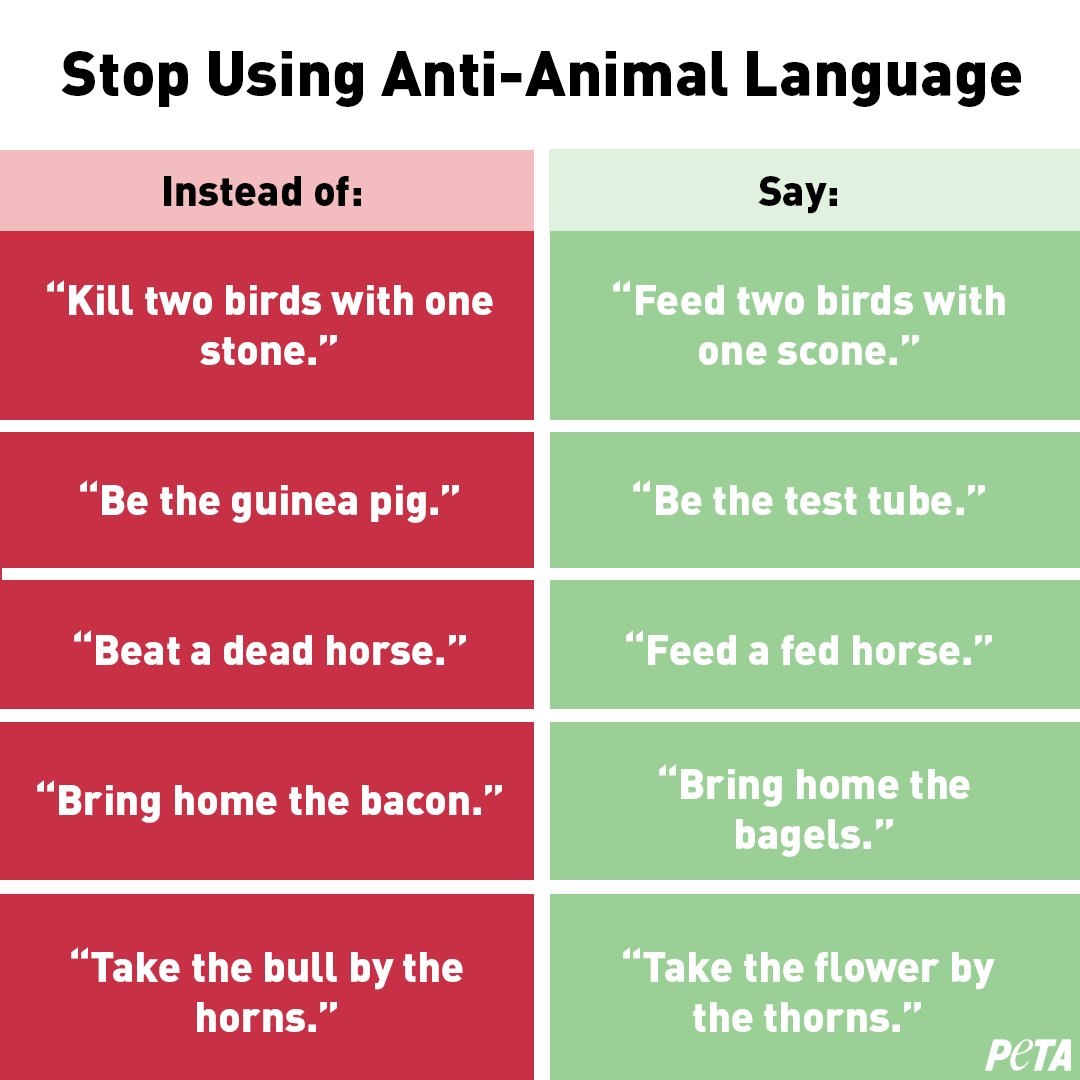 The Twitterverse erupted in mockery and ridicule, at least according to the mainstream media. The next day USA Today ran the headline, “PETA ridiculed, criticized for comparing 'speciesism' with racism, homophobia and ableism.” The Washington Post said, “the Internet thinks they’re feeding a fed horse,” a poke at one of PETA’s suggested replacement phrases.

What really provoked people, however, was a follow-up post by PETA, the Post reported: “Some of the strongest backlash, though, came from people more upset about a follow-up tweet PETA posted after the chart, in which it compared ‘phrases that trivialize cruelty to animals’ to racist or homophobic phrases that were no longer acceptable.’”

What is striking about this “backlash,” however, is that such comparisons to racism and sexism are fundamental to the case against so-called speciesism and have been such since Richard Ryder coined the term in 1970. Peter Singer popularized it in his Animal Liberation in 1975 in words quoted right on the PETA website:

For those in the animal rights movement, species is as irrelevant as sex, race, or sexual orientation to moral interests. As such, animal rights and the end of what is known as speciesism are viewed as the final stage in the effort to eliminate prejudice and to create a world of genuine equality. Some have argued against the analogy with racism and sexism, while still others have questioned the legitimacy of terming speciesism a prejudice.

I myself would contend that the entire concept of speciesism is specious. Those who brandish it caricature the innate sense of human uniqueness by means of an ideology claiming scientific justification on dubious grounds. They do this by means of the tendency to characterize experimental results in animal studies with what former Nature editor Steven Budiansky has termed “gross anthropomorphism” in reading human attributes into animal behavior. Neuroscientist Raymond Tallis is one of many who resist their “smuggling in consciousness” where it is not found, at least not as the term is applicable to humans. They assume a naturalism that denies the essential nature of humanity in flattening out all distinctions in kinds, granting moral standing to animals, contrary to Darwin himself who saw humans alone as moral and spiritual. Finally, they ignore the innate and fundamental religious aspect of humanity while seeking to found a post-human world wherein the boundaries between all living things are overcome.

What is unique about our humanity?

Words do matter and we should be careful how we speak. We should speak the truth in love and take care not to needlessly offend others. Dehumanizing language should be avoided intentionally and voluntarily where possible, but trying to arbitrate what may offend anyone in the present minefield of potential microaggressions is a seemingly impossible task.

Twitter is welcome to try, as the platform is its domain to regulate as it wishes. However, as PETA has shown, such efforts may be expanded “to include content that dehumanizes others based on their membership in an identifiable group,” like non-human animals. PETA would thus have us eliminate all references to the use of animals from our speech so as to induce us to eliminate all use of animals from our frame of reference, save as that of equals. In the famous words of Ingrid Newkirk, co-founder and president of PETA, “A rat is a pig is a dog is a boy.”

Such a reductionism of humanity to a mere equal with various other forms of sentient life and such utter disregard for what is unique about humanity, strikes most of us as absurd, and rightly so, but it is important to understand why. The “blurring of the boundaries between animals and humans means a loss of moral sense, and a disgust at humanity,” Josie Appleton has perceptively noted. What is at stake in this matter is nothing less than the uniqueness of humanity.

What is it that is unique about humanity? Fundamentally, it is the nature of humanity as rational animals, capable of higher-order thoughts and transcendent ideals conceptualized in language, that marks us out as unique. Words do matter, for they define us, describe reality as we analyze it, and delineate us from other species as ontologically unique, as rational and spiritual, with ideas that transcend daily existence to the very nature of what it means to live, to die, to love and contribute to a better world.

Language is what most anthropologists would say distinguishes humanity as a species. Let it distinguish us not as a species bent on dehumanizing others of our species for purposes of subjugation and destruction, but let it also not be used against us to undermine all that renders humanity as unique. We cannot allow our human nature to be denied, figuratively, and especially not ontologically. As Roger Wertheimer has rightly observed, “our species category is our key concept for understanding ourselves metaphysically, scientifically, biologically, psychologically, socially.”

Speciesism is a ruse foisted on us by PETA and the animal rights movement to deny human uniqueness. In its recent expansion of dehumanizing language, PETA has “let the cat out of the bag” on its ongoing assault on the uniqueness of human nature and the human species.

Randall Otto is a Presbyterian minister and instructor in religion, philosophy and other humanities for Thomas Edison State University, Southwestern College, Graceland University and Chamberlain School of Nursing.