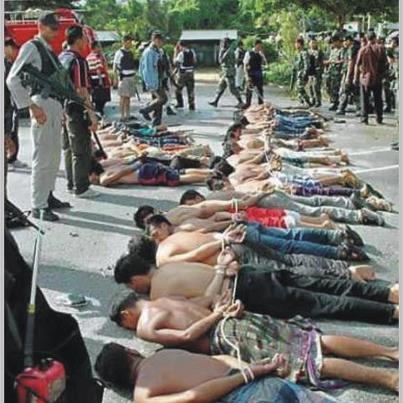 A couple of weeks ago, the President of Burma/Myanmar was a visitor to the US and to the White House. I wonder how many hearing news of this visit knew that Burma has a restrictive-birth policy similar to that of China? I certainly didn’t know about such a policy, but according to this article in the International Herald Tribune, there has been a two-child limit in Burma/Myanmar since 1994. Now, unlike China, this policy is not about any fears of overpopulation, instead it is a way to target a particular religious minority: Muslims. The reason why the limit is in the news again is that officials in part of the country to enforce the policy more rigorously:

“…Myanmar is embroiled in a new furor over its treatment of its Muslim minority with the decision by officials in Rakhine State to enforce a two-child limit for some Rohingya Muslims. The decision has ignited an outcry by human rights groups and others.

On Tuesday, the opposition leader Daw Aung San Suu Kyi labeled the policy “discrimination” that is “not in line with human rights.” The Nobel Peace Prize laureate has only recently been more pointed in addressing the treatment of Muslims in Myanmar.

The two-child limit has actually been in place since 1994, but after recent violence in the area local officials have started to enforce it in the townships of Maung Daw and Bu Thi Daung, which have the largest Muslim populations in Rakhine.”

According to the AP, this two-child policy is the only one in the world that is used to target a particular religious group.

“Burmese officials have not said how they would enforce the measure. The decision to do so came after a government-appointed panel found that the growth of the Muslim population was one of the reasons for violence in Rakhine, where clashes between Buddhists and Muslims last year forced tens of thousands of Muslims from their homes and into refugee camps.”

Burmese officials will not need to look far for inspiration on how to enforce the limit – just over the border to the north. Forced sterilisations, fines and forced abortions would all be par for the course in China, why not in Burma? After all, it’s not as if the Burmese government is not used to coercing its Muslim minority:

“The group Human Rights Watch said Tuesday that the enforcement of the two-child limit comes as officials have already been using other measures to limit the growth of the Rohingya population, like requiring Muslim couples to get approval from the authorities to marry, often by paying bribes.

“Couples often have to wait for extended periods, sometimes as long as two years, before receiving permission,” the group said. “Officials have also forced many women to undergo pregnancy tests as part of the marriage application process.”

I knew that Burma/Myanmar was a (recently slightly less) brutal dictatorship. I didn’t realise however that their dictatorship extended to dictating the number of children that sections of their population has. Unfortunately it seems as if the tensions between different groups, which is being used as an excuse for these repressive policies, is not diminishing:

“The issue of Myanmar’s treatment of Muslims is unlikely to go away. On Wednesday, in the northern part of the country, a mob was reported to have burned down a mosque and a Muslim orphanage after rumors that a Muslim man had set a Buddhist woman on fire.”