Mining and burning coal for fuel is harmful to the environment, but because it is so abundant and cheap many people are reluctant to give it up as a fuel source.

However, one Swedish power plant has come up with a novel way to replace coal; burn rubbish, such as deficient H&M clothing, instead.

The combined heat and power station is converting from oil- and coal-fired generation to become a fossil fuel-free facility that uses only renewable and recycled fuels by 2020. That means burning recycled wood and rubbish instead, including clothes H&M can’t sell.

It’s the largest station of its kind and Sweden claims it’s one of Europe’s cleanest.  Bloomberg reports:

The Vasteras plant has agreed with its neighbor, the city of Eskilstuna, to burn all of its trash – some of which comes from an H&M warehouse…

[It also] has deals with several nearby cities to receive rubbish and even imports waste from Britain to fuel its main boiler.

In 2015 Sweden announced an ambitious aim to become one of the first nations in the world to end its dependence on fossil fuels. The following table shows rubbish taking over coal as an energy source: 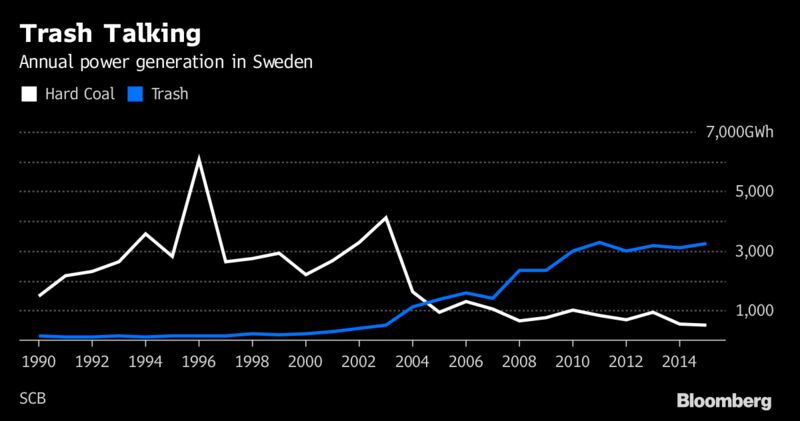 According to the Swedish government, the country has also already heavily reduced its reliance on oil, which accounted for 75% of the energy supply in 1970, and now makes up a 20% share.  The country has also invested in bioenergy, solar power, electric buses and subsidies for green cars.  Intelligent ideas to minimise waste and care for our natural environment should be applauded and investigated by other countries.