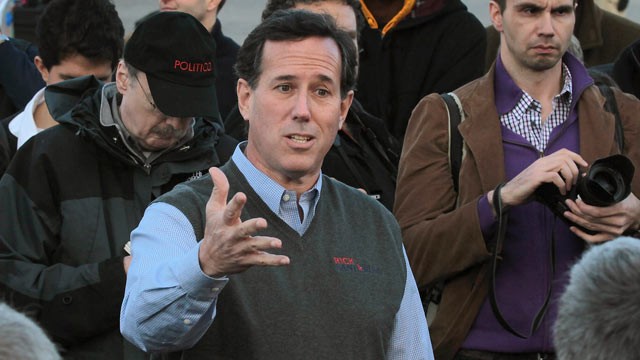 2011 was a low year for personal attacks in American politics, but the early days of 2012 are demonstrating that it can get even worse.  The latest insurgent Republican front-runner in the Iowa caucuses, former Pennsylvania senator Rick Santorum, is being smeared for a deeply personal event in his life.  His offense?  Being a good father.

Two hours after his son Gabriel was born at 20 weeks into gestation, Gabriel died.  That night Senator Santorum and his wife Karen held Gabriel through the night and the next day took him home so Gabriel’s siblings could similarly honor his short but meaningful life.  The Santorum family went on to bury Gabriel and Mrs. Santorum wrote a book, Letters to Gabriel: The True Story of Gabriel Michael Santorum,  which has helped numerous couples deal with their own losses.

As Santorum has surged in the polls, numerous commentators have begun to mention this event in a passing, but mocking manner. Alan Colmes, a liberal pundit on Fox News, dismissed it as “crazy”. Although many consider the Santorum’s response to their child’s death bizarre, it seems to me that it is the media reaction which is truly bizarre.  Considered more deeply, the negative reaction that the Santorum family has elicited is a clear repudiation of the sanctity of life.  The Santorum family considers Gabriel their son, their brother – their baby in heaven.  They knew that Gabriel, as short as his life was, was a gift.

Six years ago, my young family moved from Wisconsin to Massachusetts.  My 20-week pregnant wife, 5-year-old daughter, and 3- and 1-year-old sons set out for a new life as I took up my first faculty position.  Somewhere in the middle of Pennsylvania we stopped for the night.  The next morning, my wife had begun to spot.  The town we stopped in had a hospital where we learned that the baby had died.  We were offered the choice of having the baby’s remains extracted at the hospital or continuing on to Massachusetts and wait until we got to our new home.  Amazingly, my wife wanted to continue driving.  Her heroic example of carrying our son through this journey keeps me in constant awe of her strength and the efforts that women go to protect their living and deceased children.

Once we got to Massachusetts we went to the emergency room and explained the situation.  Labor was induced and the baby was born.  We held our baby for what seemed like hours and now seems too short a time.  We reflected on what could have been and begged God for some sort of explanation.

Over the years since his death, I have seen numerous wonders that have come out of our tragedy.  It may seem trite, but we are so much more grateful for the gifts we had been given in our children.  The medical staff clearly thought we were weird for not having a D&C procedure to remove his remains, yet they had to come to grips with the fact that this baby was a human person deserving of respect because of the respect we gave him.  The priest at the campus Newman Center hand-picked altar servers and readers to provide a funeral Mass for us, but to also to teach these young people the true meaning of a vocation.  Other families have benefited during their losses from talking with us about our experience.

Our kids were too young to appreciate what had happened to their brother, but our way of taking him home was to have a funeral and burial for our son.  Over the three years that we lived in Massachusetts, we visited his grave at least once a week to tell him about our lives, ask for his prayers, and tell him how much he is loved.  In fact, the hardest part of leaving Massachusetts was knowing that we had left him and another unborn child behind.

Bizarre?  Strange?  Perhaps, but only if you see children as a commodity and that you have a right to decide when they can come and go.  The Santorum family understands this; the pundits don’t.

I don’t know whether Senator Santorum’s policies are the best of the field or whether he should be the next president.  I do find it depressing that people can be so crass as to question a family’s basic instinct to honor their dead and respect the life that God put into their lives.  I believe that we get the leaders we deserve.  Perhaps the humanity that Senator Santorum has shown does make him unqualified to be our president – he might just be too good for us.

Pat Schloss and his family live on Six Kids Farm in Dexter, Michigan. He is an Assistant Professor in the Department of Microbiology and Immunology at the University of Michigan.

none More by Patrick D. Schloss