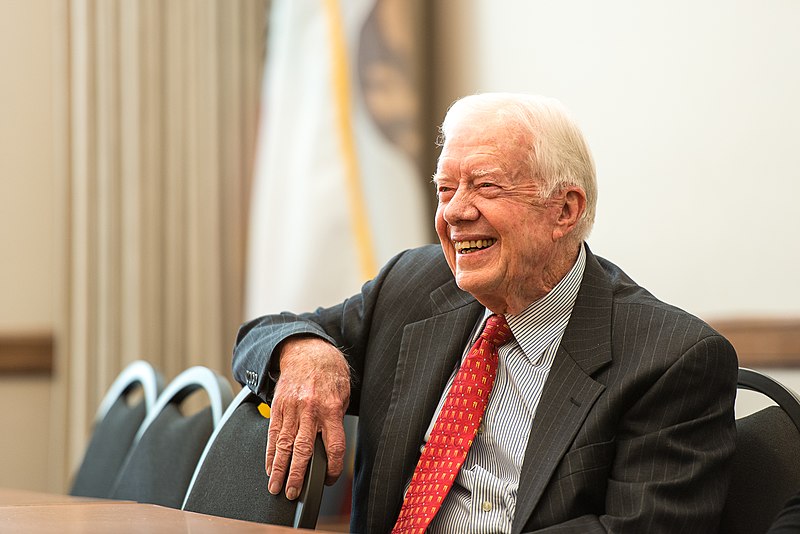 If the recent surge in the polls by Republican presidential candidate Donald Trump has proven anything, it is that politics – like love – means never having to say you’re sorry. The blustering billionaire businessman and former reality television star has made a practice of making outlandish statements and unashamedly refusing to walk them back.

Donald Trump is no Jimmy Carter.

Former President of the United States and longtime Sunday school teacher Carter has displayed the “class” that Trump so often talks about but rarely practices in his public and private life. As a politician and as a person, Carter – who last month revealed he is battling melanoma cancer in the brain – has been a figure of rare moral rectitude and personal integrity.

“I will never lie to you,” Carter reassured a traumatized post-Watergate American electorate in the 1970s, and he kept his word. You might not agree with his policy views, but you can rest assured the one-time nuclear engineer always arrived at his conclusions in a reasoned, unaffected way. He was never afflicted by the kind of overinflated ego that so obviously clouds the thoughts and judgment of “The Donald.”

“One of the things that shaped my life was realizing that I have one life to live on this earth and I ask God frequently not to let me waste it and to let my life be beneficial for my fellow human beings in His kingdom,” Carter once said.

His selfless actions both during his tenure in the White House from 1977 to 1981 and after bear this out.

Success in the Middle East

In 1978, Carter brokered a Middle East peace settlement that actually improved relations between historic antagonists Egypt and Israel. While the region today still struggles with ongstanding political, religious and ethnic tensions, arguably it would have been worse if there had never been no Camp David Accords.

As the late author and educator Betty Glad of the University of South Carolina argued, the accords “were substantial and historic: the return of the Sinai to Egypt, the establishment of diplomatic relations between Israel and Egypt, and a framework for guiding the subsequent negotiations on Palestinian self-governance and relationship to Israel.”

Carter’s response to a failed US military operation to free over 50 Americans held hostage by radical Muslim students in Tehran, Iran in 1980 is another example of his strength of character. While it must have been politically tempting for him to double down, Carter instead opted to stand down. Rather than order another military strike against the hostage-takers, Carter instead sought a peaceful and diplomatic solution.

“The mission on which the soldiers were embarked was a humanitarian mission,” he emphasized in a carefully worded statement. “It was not directed against Iran. It was not directed against the people of Iran. It was not undertaken with any feeling of hostility toward Iran or its people.” His decision to exercise restraint over force eventually won the freedom of all the hostages without any loss of American or Iranian life.

Taking this measured, nonconfrontational approach cost Carter a second term. His conservative Republican presidential challenger – Ronald Reagan – successfully, if inaccurately, portrayed him as a weak leader to American voters. It was a bitter pill to swallow, but Carter handled the difficult loss with typical grace.

“We had all done our best and had no feelings of bitterness or recrimination toward anyone,” he later recalled in his memoirs.

As an ex-president, Carter has only grown in stature. The Carter Center, a nongovernmental organization in Atlanta, Georgia that the 90-year-old founded in 1982, has done exemplary work advancing the causes of human rights, conflict resolution, disease prevention and health care around the world.

“I was not interested in just building a museum or storing my White House records and memorabilia. I wanted a place where we could work,” he writes in his latest book, A Full Life.

Among The Carter Center’s many notable accomplishments has been the almost complete eradication of Guinea worm disease, an incapacitating illness found in Asia and Africa.

“I’d like for the last Guinea worm to die before I do,” Carter told reporters at his press conference announcing his diagnosis.

I’d like to see a certain GOP presidential front-runner try to trump that.

Thomas J Whalen is Associate Professor of Social Sciences at Boston University. This article was originally published on The Conversation. Read the original article.