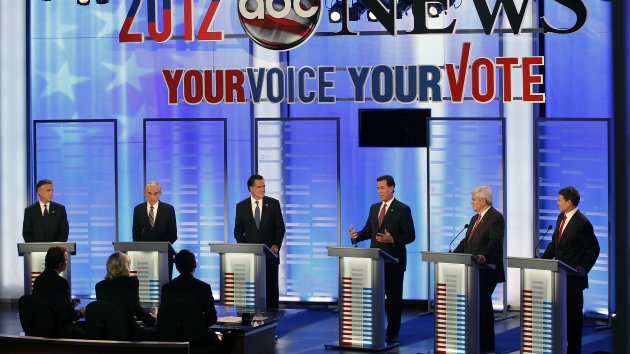 Three days ahead of the New Hampshire primary, ABC moderated yet another debate Saturday night among the GOP candidates. Questioners asked about the economy and foreign policy. But they provoked candidates pointedly on social moral issues. In response, they got an earful.

He seized the opportunity to blast the media for anti-Christian bias. Which moderators teed up with their pointed questions.

“Your position on same-sex adoption, obviously, you are in favor of traditional families, but are you going to tell someone they belong in — as a ward of the state or in foster care, rather than have two parents who want them?”

Mr Santorum answered, “My — my feeling is that this is an issue that should be — I believe the issue of marriage itself is a federal issue, that we can’t have different laws with respect to marriage. We have to have one law. Marriage is, as Newt said, a foundation institution of our country, and we have to have a singular law with respect to that. We can’t have somebody married in one state and not married in another.”

“Once we — if we were successful in establishing that, then this issue becomes moot…

Speaker Gingrich, however, answered the question another way asking the media:

“I just want to raise — since we’ve spent this much time on these issues — I just want to raise a point about the news media bias. You don’t hear the opposite question asked. Should the Catholic Church be forced to close its adoption services in Massachusetts because it won’t accept gay couples, which is exactly what the state has done? Should the Catholic Church be driven out of providing charitable services in the District of Columbia because it won’t give in to secular bigotry?”

“Should the Catholic Church find itself discriminated against by the Obama administration on key delivery of services because of the bias and the bigotry of the administration?

“The bigotry question goes both ways. And there’s a lot more anti-Christian bigotry today than there is concerning the other side. And none of it gets covered by the news media.”

Mitt Romney noted that Massachusetts Catholic Charities was out of the adoption business because of the Church’s fundamental beliefs. Rick Perry jumped in and criticized the Obama administration for stigmatizing Catholic Charities because of its principles on marriage and abortion, driving them out of important social services.

At the end of the debate, ABC moderators George Stephanopoulos and Diana Sawyer turned to a panel of pundits in their studios for analysis. She addressed one of them saying ‘You’ve spent a lot of time covering these charac….’ and then caught herself and adjusted her comments and said ‘covering these candidates’…and proceeded to ask the question.